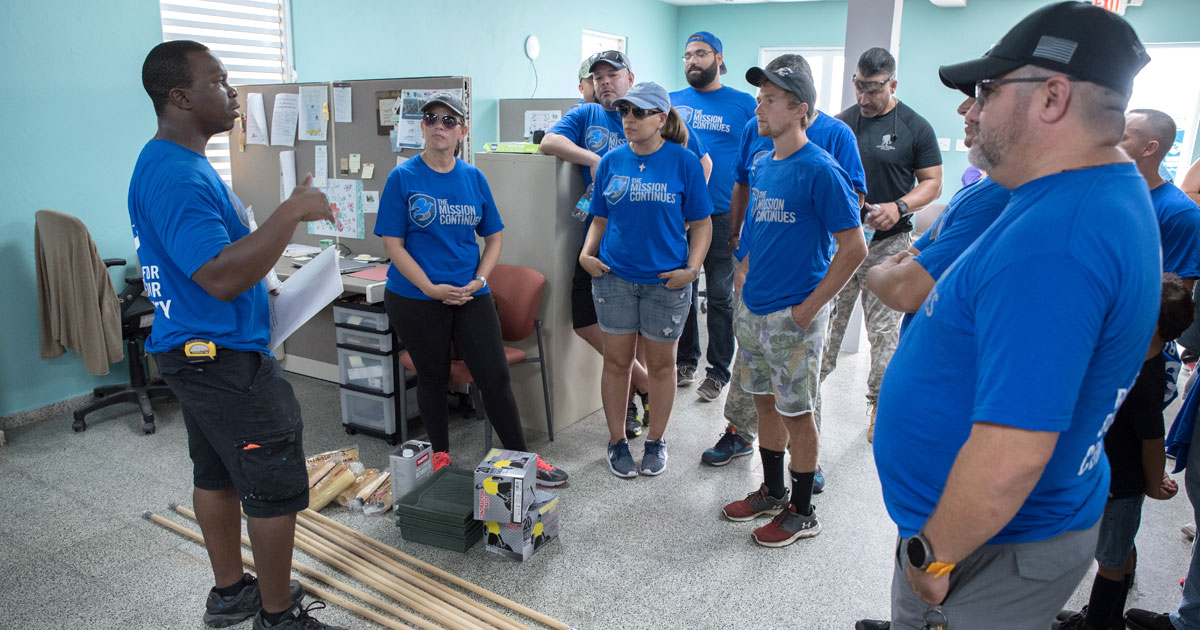 My flight landed at 6pm on a Thursday night. I was coming from a very cool New York City climate to a very humid, tropical Puerto Rico. Luckily, a lot of people in Puerto Rico speak so it wasn’t too much of a challenge to get around at the airport.

My first observation of the island was how dark it was particularly on the highway. Not too many of the streetlights were operational; one of the many effects the island was experiencing in the wake of the Hurricane.

Though the hurricane affected the streetlights; it did not have much of an impact on the food. I was able to grab some of the best tacos I’ve ever had from a local food truck in Carolina, a San Juan neighborhood. A medley of spices and flavors unlike anything I’ve ever experienced.

My reason for visiting the island was to assist the Puerto Rico Service Platoon with a service project they were planning in remembrance of Hurricane Maria. Hurricane Maria is the 10th most intense Hurricane to occur on record. The project would support folks that were affected by the hurricane a year prior in a little town called Humacao.

Humacao is located in the southeast part of the island. It’s also the very first place to be hit by Hurricane Maria with flooding in homes reaching up to 10 feet! One year later, these homes are still feeling the affects, but the people living there are making it work and living their best lives.

With the help of some local nonprofits, The Mission Continues was welcomed into three of these homes to help make some repairs. There were veterans and homeowners scraping ceilings and walls that would then be painted as well installing new doors.

In the last year since the natural disaster, The Mission Continues has done service projects across the island with the intention of improving community health & welfare, and build on the growing sense of resiliency.

In my time here I was able to connect with over 40 veterans and learn about how the hurricane has impacted them and their families. So many of these veterans showed a sense of selflessness where they wanted to be a resource for the communities they live in and for the island.

There will be many more opportunities to serve alongside these veterans. Frankie Perez, the Puerto Rico Platoon Leader has done service projects throughout the island in areas such as San Juan, Ponce, on top of Humacao. In 2019, the platoon will be looking to include the beautification of National Parks such as El Morro through painting and landscaping.

Check out what The Mission Continues is doing in Puerto Rico and find ways to get involved!