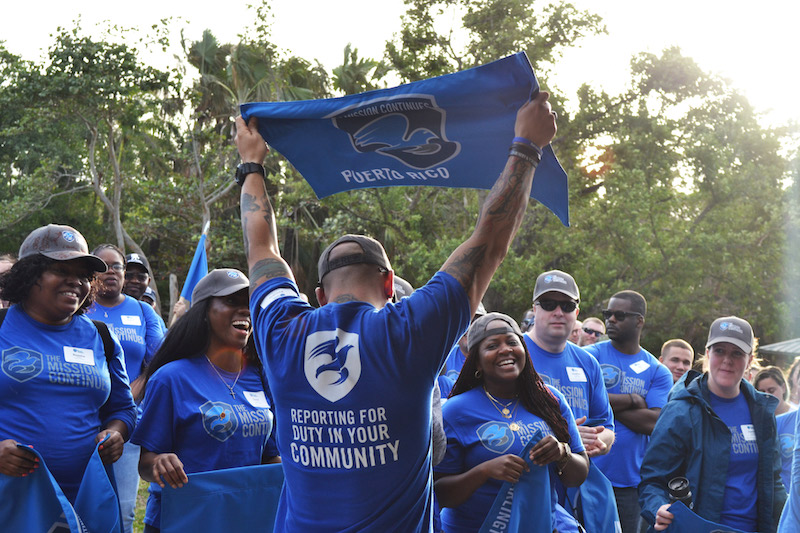 The Start of a New Mission in Puerto Rico

It’s been six months after Hurricane Maria devastated Puerto Rico, and U.S. Army veteran Frankie Perez is on a mission to galvanize veterans to build a legacy of service on the island.

To understand his mission, you have to understand Frankie’s story and what this would mean to veterans in Puerto Rico.

The youngest of 10 brothers, Frankie was born and raised in Puerto Rico. He enlisted in the military just months before the attacks of September 11, 2001 and deployed to Iraq in 2005. But when he came back to live in Puerto Rico in 2006, he knew he wasn’t the same anymore. Two years later, Frankie attempted suicide.

This experience motivated him to enroll in programs with the Wounded Warrior Project to manage the challenges that come with PTSD and to connect with other veterans facing the same things. As he became more involved within the veteran space, he built up a veteran network, and it was through this veteran network that he found The Mission Continues in 2017.

The timing couldn’t have been more perfect.

It was around that time that Vu Nguyen and Matthew “Mateo” Tanner, City Impact Managers for The Mission Continues, were doing research in Puerto Rico with the goal of starting a volunteer group made up of military veterans to serve the island.

They came knowing two things: They knew there was a need in many Puerto Rican communities for revitalization and empowerment, and they knew that was exactly what The Mission Continues already did in communities across the country.

According to Frankie, veterans are misunderstood in Puerto Rico, perhaps to a more extreme degree than they are on the mainland. “I feel like a second class citizen. People think we are crazy people that use pills or get drunk.”

This lack of public understanding bothers him. “They don’t see the resiliency. They don’t understand that some veterans are lost because they’re not in a team effort environment anymore. It just seems like a crazy, selfish world to us. And that’s why we struggle the most.”

The Mission Continues had planned to launch a service platoon in San Juan by the year 2020, but the devastating effects of Hurricane Maria introduced an immediate need to activate veterans to help rebuild.

This call to serve struck a chord with Puerto Rican veterans like Frankie who yearn to be at the forefront of a veteran-led movement. “The hunger of the people to do good and be part of change — that’s something I’ve never seen in my life, after the military. That core is our core.”

Frankie is now the leader of the Puerto Rico 1st Service Platoon. “I’m excited because we’re going to provide opportunities for veterans and civilians to change Puerto Rico for the better. The Mission Continues is going to be part of positive change for the entire island.”

One important aspect of this positive change is that it is sourced from Puerto Rican veterans themselves and their fellow community members.

“Part of the magic of The Mission Continues is that the service platoons work under the direction of the local veterans, and value the context they provide,” added City Impact Manager Mateo Tanner. “This couldn’t be more true for our approach in Puerto Rico. The culture, veteran experience, and obviously, challenges associated with Hurricane Maria, are different than what we experience on mainland.”

In addition to starting a service platoon made up of a group of volunteers, The Mission Continues also awarded two fellowships to veterans in Puerto Rico. These two veterans — Jaime Lugo and Jose Cruz — have both committed to six months of volunteering in nonprofits for 20 hours per week. Jaime will be serving with the American Red Cross, and Jose will be with Disabled American Veterans. They will also receive support from Mission Continues staff to set and achieve personal and professional growth goals.

“I used to do logistics to send weapons to kill people. Now I’ll be sending food and water to save people,” said Jaime, a US Marine Corps veteran. “I’m excited to put back to work a lot of things I learned in the military during the war to help as many people as I can.”

Jaime is looking forward to get back in action. He’s helping the American Red Cross improve their strategy for delivering aid to Puerto Rico, given the challenging island terrain. “Coming back after being in surgery for so many years, being able to put my experience to work is going to be awesome.”

Now more than ever, Puerto Rico needs veterans like you to serve again — this time, as their neighbors. If you too are looking to get back in action with The Mission Continues, this is your chance. We invite you to serve alongside veteran leaders like Frankie, Jaime and Jose at our first service project in Puerto Rico in April 2018.