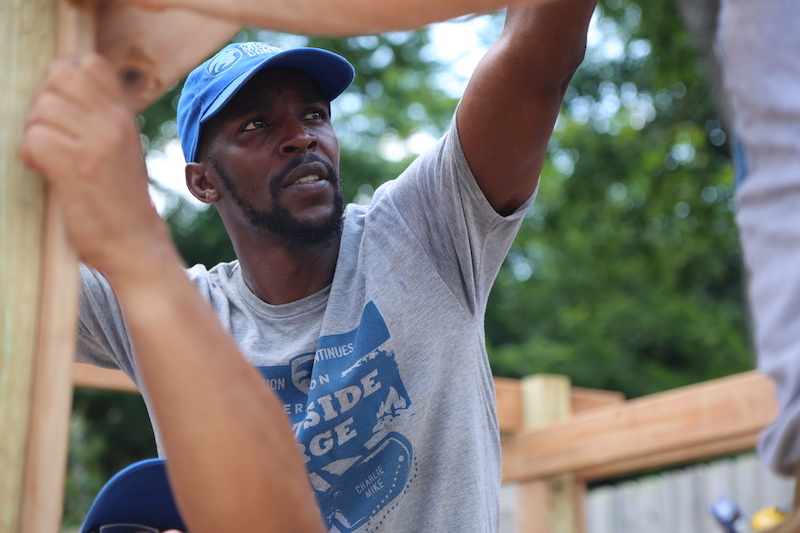 A 40 Year Journey for Unity in My Childhood Community

As a child growing up in the inner city of Pittsburgh, I was always made aware of the importance of Black History Month. So when February came around, we students knew there was going to be some cool classroom projects, autobiographies, and pictures surrounding the classroom that month for us to learn more about African American culture and Black History.

We learned about Marcus Garvey, Harriet Tubman, Dr. Martin Luther King, Thurgood Marshall, and a host of other well-known African American leaders. Some of us would even get to dress up and reenact their life stories in plays, skits and musicals.

Although it is not blatantly obvious, the undertones of segregation and racial discrimination are prevalent throughout Pittsburgh. To get a glimpse of how separated Pittsburgh can be, one would only have to step one foot into my childhood community, Homewood.

Homewood is a predominately African-American neighborhood in Pittsburgh. When I was a young boy in Homewood, the neighborhood was fun and recreational – there were plenty of activities for children to do around the neighborhood – a skating rink, sports programs, and the like. But the effects of poverty, low-income housing, underemployment, and the drug crisis of the 90’s have since crippled the community.

Pittsburgh has invested millions of dollars into infrastructure and community development, but Homewood was left out of the redeveloping plan. The community still provides programs for youth, but they are not well supported anymore — they have less funding, less manpower, and fewer resources.

Crime is still prevalent in the area and many children and residents have little to no one to look up to. A lot of its residents share the sentiment that no one outside Homewood cares about them.

The struggles of the community and its children resonate with me on a personal level. Like many children in the community today, I grew up with no father in the home. I had a single mother who was addicted to drugs, and it seemed at times that no one cared about the harsh realities of poverty-stricken families in less affluent, drug polluted, communities.

All we had was each other, and with the community being almost completely African American, it seemed as if the outside world simply did not want to deal with the issues in Homewood.

And yet, in the face of this adversity Homewood has always been a proud community.

After I graduated college  — not long after September 11th, 2001 — I joined the United States Navy because I felt that I still had a duty to myself, my family and my country.

I did two tours in support of Operation Enduring Freedom in Afghanistan and Operation Iraqi Freedom in Iraq. I loved my job and my service, but there was one part of the job that would change me for the rest of my life: each time I watched a mission I saw children, families and buildings collapse. I could not help but think about my own family and how lives were being lost daily.

When it came time to separate from the military, I immediately returned home to Pittsburgh.

Once I landed in Pittsburgh, reality set in. I felt as if my identity was left back in the military. My friends were no longer my friends, my family was no longer the family I had left when I joined the military, I felt secluded in my own thoughts, and depression quickly set in.

I became a hermit and confined myself to my place for a little over a year burrowing myself with more guilt, pity, and seclusion each day. I had faced homelessness, I refrained from taking my medications, and I submerged myself in depression. Many times I even contemplated suicide.

Luckily, Wounded Warrior Project provided an outlet for me when I needed it most. They worked with me to help me gain my sense of self-control back and also helped me “get out” more. But there was still something missing… and I was not quite sure what it was. 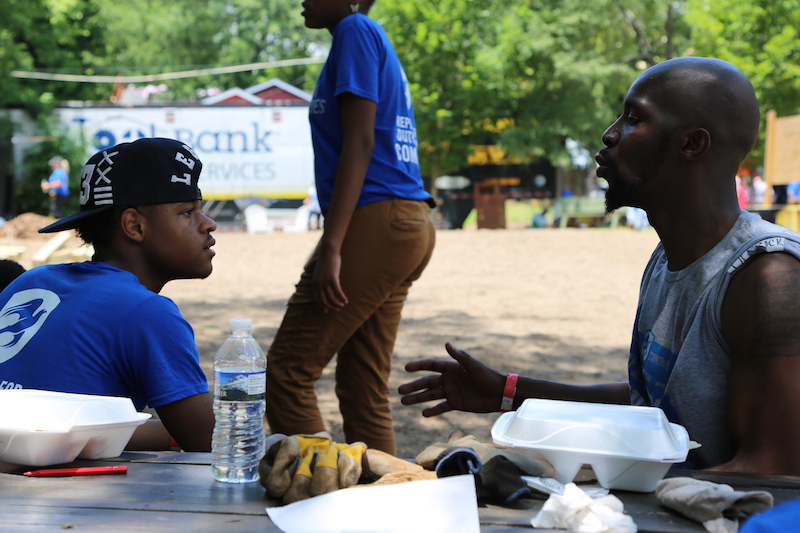 Derrick Clark talking with a local teen at a service project in the Westside of Atlanta, GA during Operation Westside Surge.

One day WWP sent me an opportunity that was right up my alley. There was going to be a Mass Deployment in Atlanta, Georgia with The Mission Continues where I would have the chance to go into challenged communities and make a difference.

The best part was that these communities resembled the communities of Homewood and East Liberty back in Pittsburgh where I grew up. I applied and was selected to attend Operation Westside Surge.

It has been almost a year since, and I am still serving with The Mission Continues through their Service Platoon Program and more so, serving in my very own HOMEWOOD!

Since joining the Pittsburgh 2nd Service Platoon I have seen progress in the faces of those we work with in Homewood, Hazelwood and similar communities in Pittsburgh. They are seeing the impact of togetherness, compassion, and hope through our efforts.

It is an honor and a pleasure to serve the community I once inhabited as a child. Today’s children in Homewood learn about Black History Month in school just as I did almost 40 years ago. But this time, I hope they know they can see an African American leader right here in the present, in their neighborhood, someone they can look up to and identify with.

You don’t have to be world-famous to make an impact – you just have to dedicate the time, energy, and effort to work with your community from the ground-up and lead by example.

Black History Month is an opportunity to for these young students to celebrate not just the accomplishments of their forefathers and their history, but also of themselves and where they’re from, because Homewood’s history is Black history.