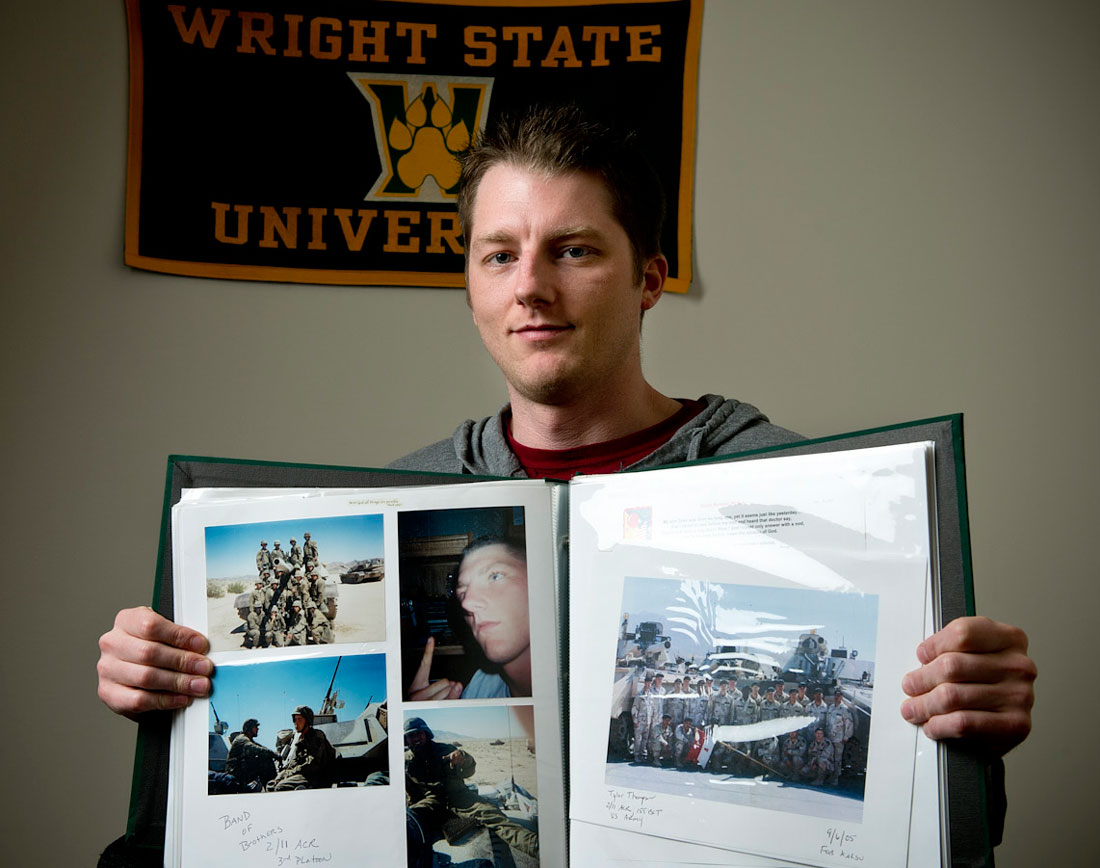 Years After My Fellowship, I Still Live for Others

A few years ago, we published a blog post by Tyler Thompson’s mother, Robin Herzog. Today, years after his fellowship has concluded, Tyler still serves his community. “Why?” do you ask? His story will answer your question.

The day I returned to America from Iraq in 2005 was the most pleasurable moment of my entire existence. I felt sheer ecstasy from cheating death several times that year, and knew I would never have to dodge bombs and bullets again in that desolate wasteland.

I separated from the military and began studying Criminal Justice, while working full-time as a supervisor at Starbucks. After a couple years of keeping myself extremely busy, I started to slow down.

And that’s when the PTSD hit me hard.

I had been vigilant and easily startled for a while, but was able to shrug it off. I frequently began visualizing the bombs that blew up in my face on patrol, or the time I accidentally killed a teenager following the rules of engagement. I tried to seek help at the VA, but I was too stubborn and wanted to fix things on my own. I thought if I re-enlisted, it would keep me busy and I could get my life back together.

I did re-enlist, and ended up serving in the 2nd Infantry Division, deploying to Afghanistan where I encountered many of the same situations. When I returned home a second time, the pleasurable feeling was replaced with thoughts of darkness and despair — I had to seek professional help. It was one of (if not the most) challenging moments of my life.

It’s been almost seven years since the day I sat in my car contemplating seeking treatment in Washington State. Death grip on the steering wheel, about to walk into a clinic so old it looked like an abandoned asylum.

Was I really about to ask some stranger for help? I had no choice, fellow sergeants and soldiers were noticing I was detached and kept asking me what was wrong. I had worked so hard to become a sergeant in the combat arms field, and was damn proud of it, but felt so disconnected from everything and everyone that I just couldn’t focus on my duties anymore.

I am forever grateful a friend and fellow soldier who knew me before my deployment noticed a change in me, and recommended I seek professional help instead of turning to illegal drugs, alcohol, or even suicide. He had been through the process before, and I felt validated knowing an infantryman thought it was the right thing to do.

What commenced was an extensive and arduous journey of exploring my mental health issues and receiving treatment. I was angry about having to seek help many days, and felt so out of control. I would walk around the base at night just looking to pick a fight with someone. Other times I would connect with a professional and I hardly had to explain myself — they just understood what I was going through — and I didn’t feel so alone or helpless.

I then started getting involved in my community by volunteering at my local school and helping to pick up trash or answering phones at the local radio station to take donations. Even though I had immense anxiety over the unknown, I put myself out there. What was the worst that could happen? Hell, I’ve already been to war twice, it can’t be worse than that!

Another positive aspect of encountering mental health issues was having the personal experiences to help other veterans who were experiencing similar symptoms. I eventually decided to use my GI bill to get a degree in Rehabilitation Services at Wright State University in Dayton, Ohio. While I was attending college, the director of the Veteran and Military Center suggested the Mission Continues to me. It was the catalyst that prepared me for where I am today. Being a Mission Continues fellow gave me back that feeling I had been missing. 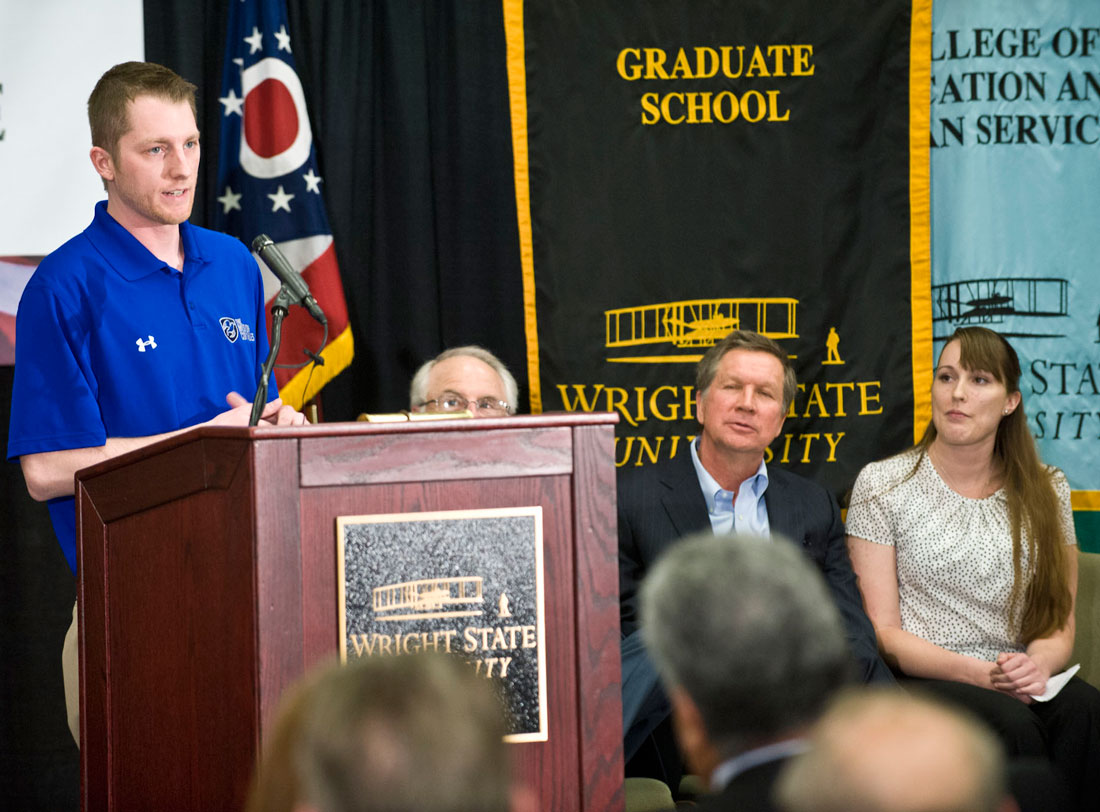 I felt camaraderie and a sense of belonging.

I had a purpose once again and felt important.

I was serving again, even though I thought I would never be able to do that again.

They showed me you can still serve, just in a different capacity. They taught me how to set goals and I proved to myself that I could devote 20-30 hours of my time to a cause greater than myself again.

I created programs such as a peer-mentor program to help incoming veterans with the challenges of attending college. I also helped create a new student orientation specifically for veterans because of the unique challenges we face.

The culmination of my fellowship involved speaking in front of hundreds of people on campus while the Governor of Ohio was in attendance. My speech preceded his and he shook my hand and clasped me on the back thanking me for my service. Four-star generals, judges, and the news media were all rushing to talk to me and interview me about my experiences. It was such a rush to have struggled for so long, almost taking my life, and finally feeling validated for all of my hard work.

I couldn’t have done all of this without all of the support I received over the years from my family, friends, colleagues, fellow veterans, and the VA. My mother especially was always there to help out and keep me motivated. Having a strong support system is key to successfully moving onward. Even if you can think of a thousand reasons to give up, you just need one reason to keep going.

I now reside with my wonderful wife, whom I met in college, in a nice, quiet suburb of Columbus, Ohio. I work as a recreational therapist for a company who has been named by Fortune magazine as one of the nation’s best companies to work for.

I still struggle with negative thoughts, hypervigilance, and nightmares from time to time. However, I still remember the power of positive thinking, serving again, and if I didn’t want to live for myself, I could at least live for others.