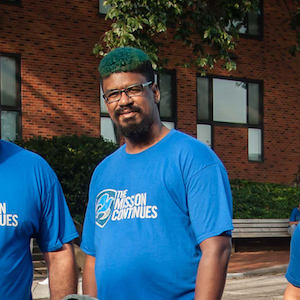 #WhatsNext in the West from New Executive Director Doug Pfeffer

These past few months have been very productive and transformative for The Mission Continues West Region. Shortly after Mass Deployment in Los Angeles, we said farewell to Regan Turner as the Executive Director and welcomed back Doug Pfeffer (former Seattle City Impact Manager) to the role as West Region Executive Director.

Here’s an update on what’s happening in the West Region from Doug himself!

I wanted to take a moment to introduce myself. My name is Doug Pfeffer, and I am honored to assume the role of West Region Executive Director. Regan Turner was a huge influence on this region, as well as across the country.

Although I am trying to fill some pretty big shoes, I plan on doing my best to not only maintain the current form that has generated so much success in the West, but to see it taken to an even higher level, as we continue to impact communities across the West, and activate veterans across the entire region.

The last couple months have been a whirlwind experience. Operation Watts is Worth it saw us impact the entire community of Watts in Los Angeles, through 5 distinct project days, each with their own flavor. It was truly inspirational to see our volunteers, staff and community members work so seamlessly, for such a sustained effort, and for such an amazing community.

Over 75 veterans joined us in Los Angeles for the week of service, and to top it all off, the West had two representatives serve as Ambassadors, with the responsibility of guiding new participants unfamiliar with a Mass Deployment through the experience.

We even had a new staff member join us in July, as Linh Thai reported for duty in Seattle, WA, with responsibility Seattle, Tacoma Portland. On August 11th, 2018 in Seattle, Linh brought all four Northwestern platoons together for the 2018 Seattle Service Block Party.

The Mayor not only stayed for the whole but got in on the action as Team Mayor built a beautiful double planter bench for the kids of the 20th Street Elementary School. Team Mayor even beat out Team LAPD.

Finally, as the month drew to a close, the entire region participated in our 2018 Summer Service Slam, where we had over 100 veterans participate in projects in support of Operation: Fix Our Parks.

These national park-loving veterans joined our partners at the National Parks Conservation Association at Mount Rainier NP, Sequoia and Kings Canyon NP, Grand Canyon NP and the World War II Valor in the Pacific NM in Hawaii for an incredibly impactful weekend.

The Summer Service Slam activated 92 veterans across the and promises to become a highlight on the West’s annual calendar.

The West definitely did not slow down after that. The 2018 West Region Platoon Leader Retreat – Rally On The Rock kicked off in San Francisco August 3–5, 2018, the Honolulu 1st Platoon got in the water at the NaKoa Wounded Warrior Regatta on August 18th, 2018, and the rest of the West Region prepares for our national 9/11 United In Service Campaign.

Join us for 9/11 service projects in the West and across the country!