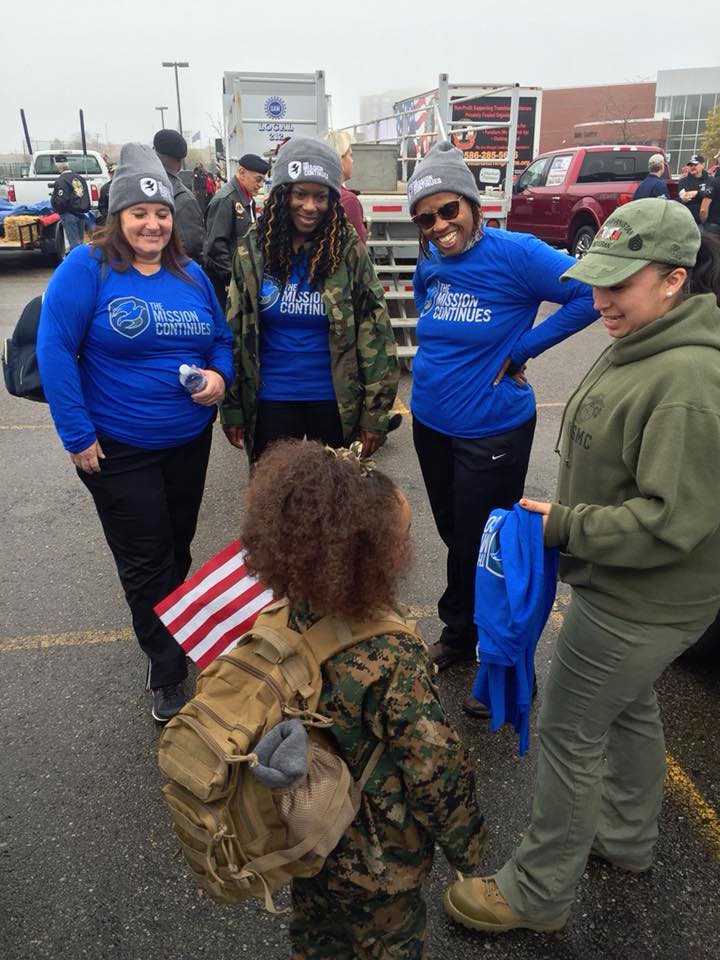 The Unexpected Revelations of an Army Spouse 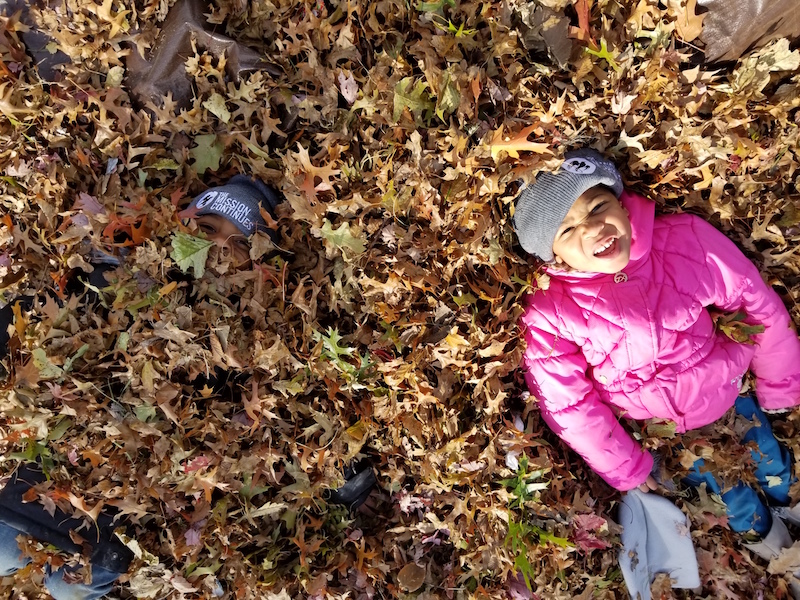 Though my tenure as City Impact Manager at The Mission Continues began prior to marrying my husband, an Army reservist, you may be able to imagine that since working here, I’ve dragged him into the mix and he’s become very involved.

Truly, volunteering is the type of work he would do on his own anyway, even if his wife wasn’t asking him to help out her volunteers on a regular basis. He really seems to enjoy the physical nature of the mission and learning about different neighborhoods and their challenges around the city.

He’s one of those guys who is reluctant to volunteer the information that he is a veteran. For someone who identifies his greatest abilities and talents with his job in the Army, this always has been a quandary to me. He is proud to serve, and proud of his reasons why, but he is conservative with that information, reserving it only for his inner circle.

At the Detroit 2nd Platoon Veterans Day project this past weekend, we had a lot of fun and got a lot of work accomplished, but what I will share with you now is the revelation I had as an Army spouse, not as a staff member.

It’s been below freezing in Detroit and our project was at a park. To battle the elements, we rented a party tent and set it up with heaters, hot cider, and a DJ to keep everyone warm and engaged.

As the project was wrapping up, the DJ was pulling volunteers for “radio interviews” using a few canned prompts—What does The Mission Continues mean to you?  How does this service project honor Veterans Day? Why are veterans important to this community?

At one point, the DJ tried to pull my husband, Eric, over to respond to the questions. Eric just smirked, shook his head, and nudged another volunteer to go instead. We all chuckled at his “decline to comment,” and carried on in stride. 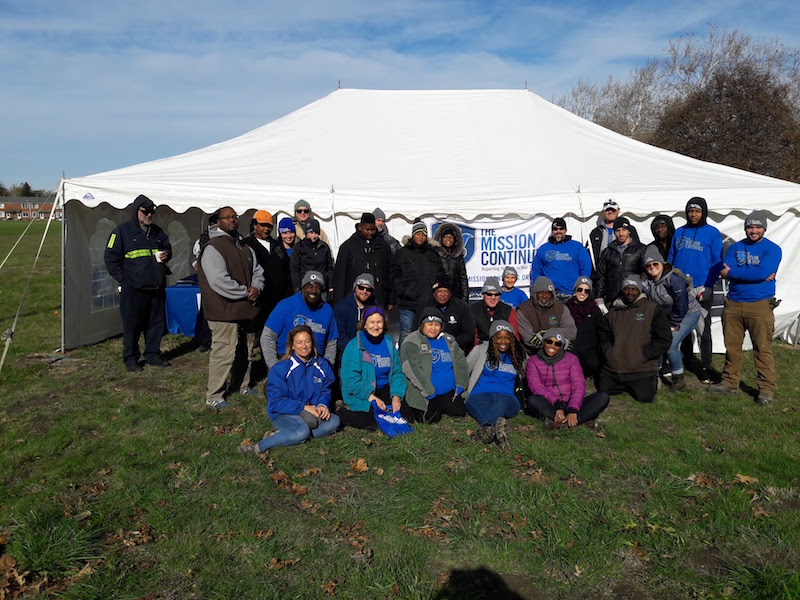 Later that evening after the project had concluded, we decided to go out for dinner.  We ended up at a busy sports bar, where there was an obvious presence of other veterans seeking Veterans Day discounts.

At one point during dinner, the server stopped at the table to check on us. “We’re great,” Eric said, “but I’d like to buy that gentleman’s beer.” He indicated an older man sitting two tables away from us who sported a WWII hat. The server nodded knowingly and bustled away.

When the time came to pay our bill, Eric handed the server more than enough cash for the bill plus tip.

He said, “I am a veteran, however, I do not want the discount you’re offering. I want you to apply the discount to the bill and keep that for yourself. You’ll probably get guys in here today who will take your free entree offer and then not tip you, so this is from them.”

We walked back to the car without much exchange. I was lost in thought wondering what was going on his mind, and he still seemed distracted by whatever it was.

Until that moment, the excitement of the events of the day had diluted my ability to perceive his solemn energy and introversion, which he typically exhibits on Veterans Day and similar holidays, like Memorial Day and 9/11. As we drove him, he broke the silence. “Do you know why I did that?”

“I only have my guesses,” I replied.

“I am owed nothing,” he said.  He must have seen my face reflecting a lack of understanding because he went on. “I made a choice when I joined the army. There was no draft, I knew what I was getting myself into, so the rest is on me.”

I sat for a moment without saying anything. Just as I was about to argue with him, he continued, “And I’m sorry I didn’t do your interview today.”

“It is,” he said. “It’s just hard for me to answer those questions, like ‘How does community service honor Veterans Day?’ I am owed nothing,” he repeated.

“I do service like this because of all of my friends who are still over there serving and I’m not there with them. This is the only way I can serve now.”

I realized for the first time that he has guilt about the prospect of never deploying again. He has two years left in the reserves until he is truly “done,” but he has repressed his itch to go back since we became pregnant with our daughter.

On most days, I believe he sees that his place is at home now. I think that is harder or more painful to see this on days like Veterans Day, but before he opened up, I never realized what continuing his service at home meant to him. 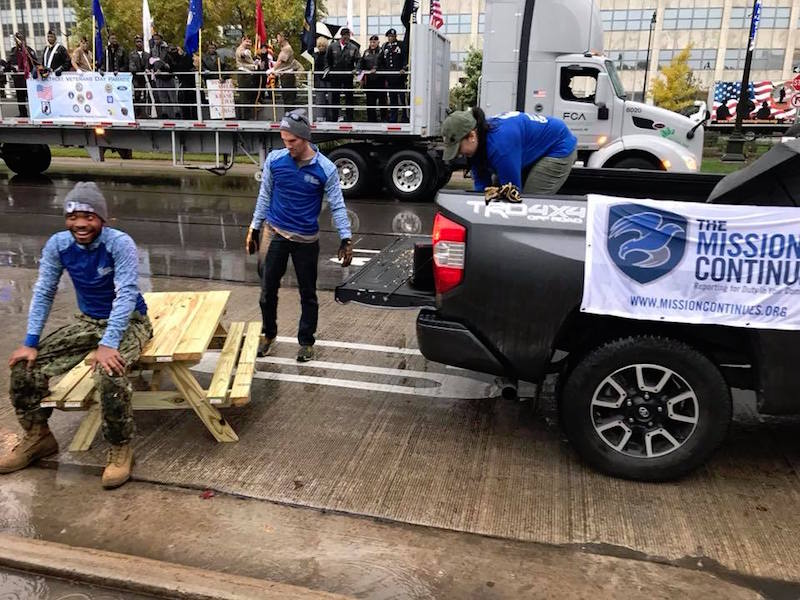 Perhaps I’ll never really understand the inner workings of the mysterious man who is my partner, with everything he has seen and experienced, but I feel as though this conversation was one of the most important of our marriage.

The work The Mission Continues does in communities transforms the space, possibilities, and perceptions of those we serve. For me, sometimes the service that is just as important is the service of having these conversations.

My greatest contribution on Veterans Day was to witness the beautiful servant’s heart of, not only my husband, but all those who came to honor Veterans Day through service, and to create the space for these conversations.

We all serve for a reason, and for whatever those reasons—spoken and unspoken—we thank you.