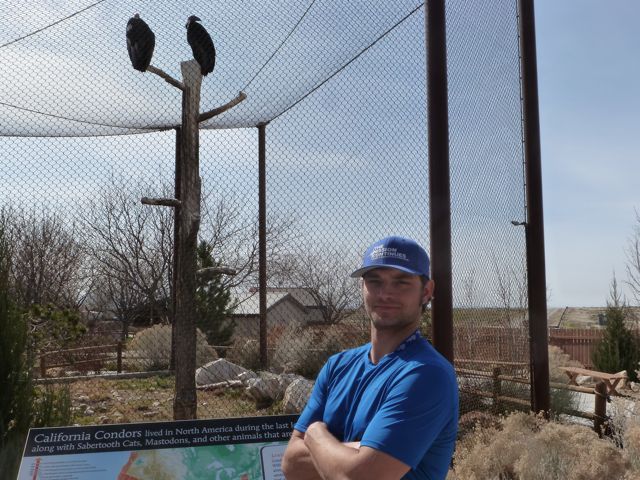 How to Take Flight at your Fellowship

Toby Magavero walked into the building without knowing a thing about condors. He left with a mission to conserve their part in a fragile ecosystem.

As part of his six-month Fellowship with The Mission Continues in 2013, Toby served in Boise, Idaho at the Peregrine Fund, a nonprofit dedicated to saving birds of prey from extinction. It was a long way from Kosovo and Iraq, where Toby served a tour as a cavalry scout in each country.

His time in the Army was hugely important for his development, Toby says, but there was one thing missing: the freedom and responsibility to take the initiative when orders and chain of command dominate a junior soldier’s life.

“My Fellowship taught me a lot about myself, that I have the ability to make things happen on my own,” Toby said. His duties at Peregrine revolved around caring for birds, but a secondary task was to connect fragile species with the public. He found a way to do that through a special screening of a documentary on condors. From fundraising and bringing the filmmakers on board to coordinating the screening in Boise, Toby was out front. “You don’t realize you have this power until you go out there,” he says.

Toby during his Fellowship.

Toby brought that message back to the Alpha Fellowship Class of 2015, where he shared his story to ignite 100 more burning trails. He had been in the same seat two years before, so he knew they were still feeling out this new opportunity (and responsibility) to lead. “I want them to reach further and achieve more than my class has done so far,” Toby said, hoping to galvanize the newest crop of Fellows before they rejoined their communities.

They have a lot of work cut out to catch up with Toby. He finished his undergraduate studies in geoscience and is now focused on completing a graduate degree in environmental management.

“I hope that story did something for the new Fellows,” he said. “I want to empower them to move forward.”

Interested in joining the next generation of leaders? We’re accepting Fellowship applications for Charlie Class 2015 through April 3.