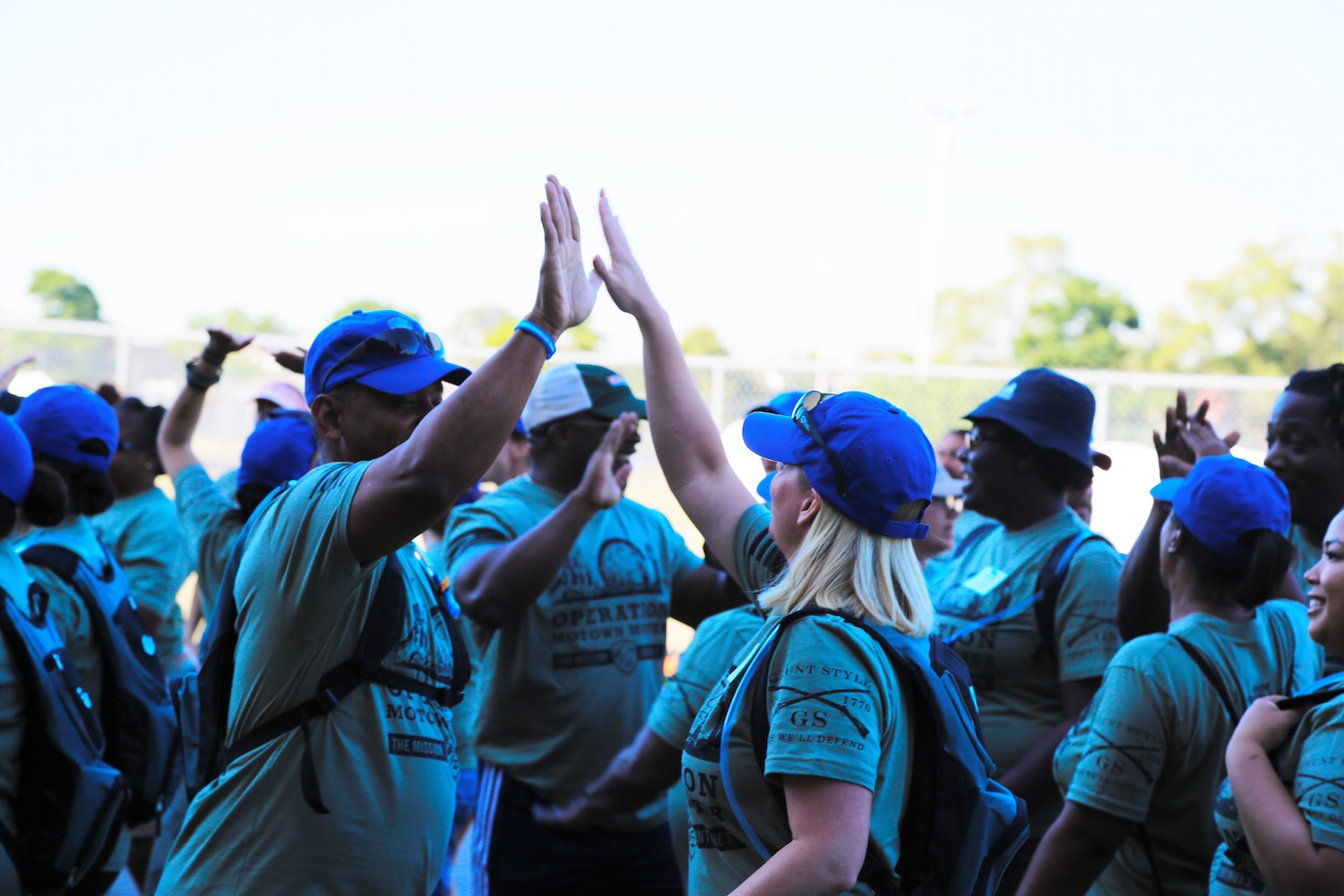 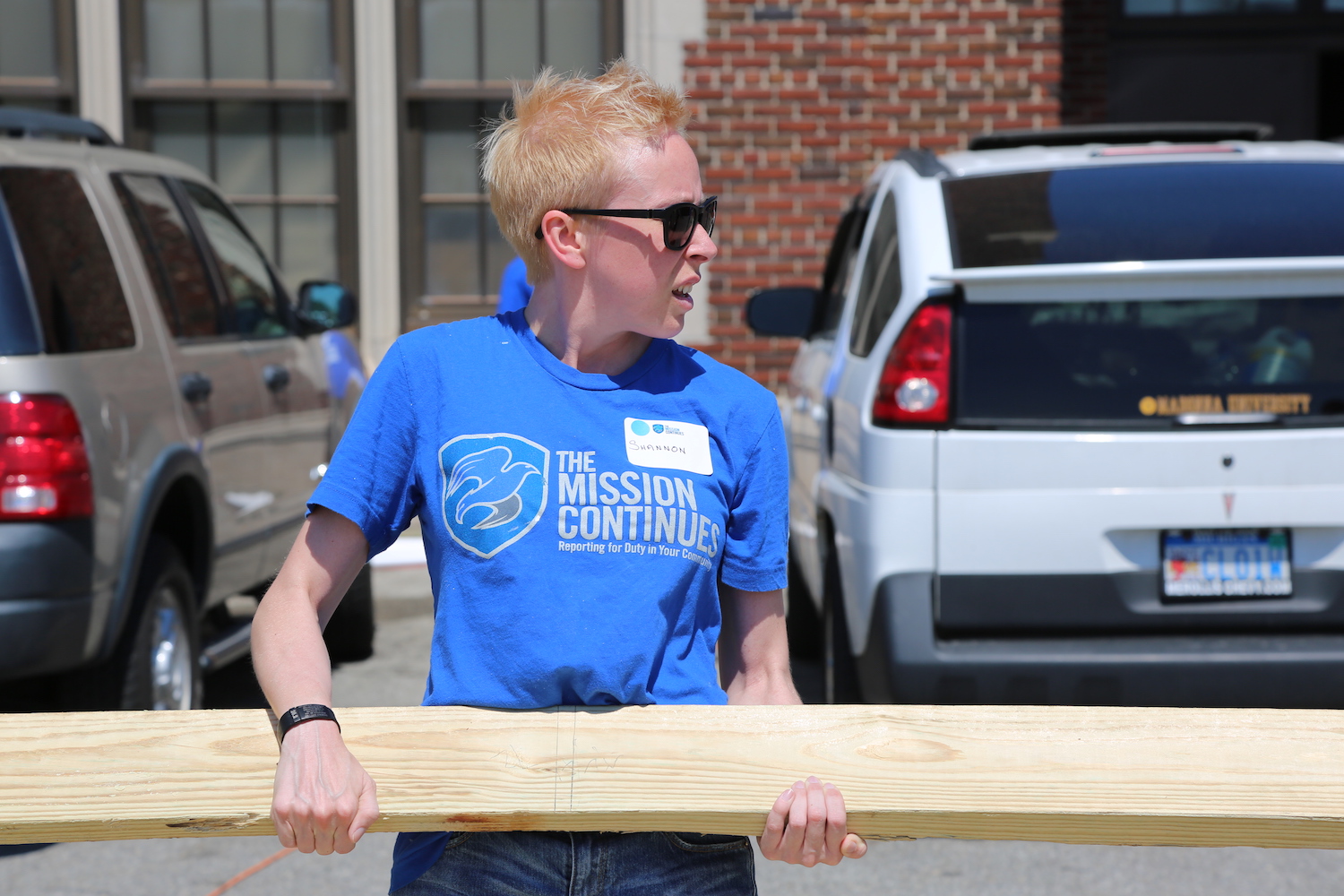 I recently had the unique experience of being a part of The Mission Continues first Mass Deployment, to Detroit. One week, five days of service, four project sites: 4000+ hours of service. A couple of other fun statistics: three amazing roommates, 70 other incredible veterans, countless national staff that coordinated and planned the whole thing, and approximately five hours of sleep every night. Plus, there was the added benefit of coming home looking like you spent a week street fighting because you’ve got bruises everywhere.

I have been volunteering with The Mission Continues for about a year and a half now. Engaging with other veterans has been essential in maintaining happiness and balance in my life. When I disengage from the veteran community, I disengage from life — and that is when I fall into depressive episodes and let my health slide.

Illness, injury, surgeries and recoveries have dominated my life for the past 11 months. I could do the service projects I found with the Minneapolis 1st Platoon when I was sick, weak, and recovering from these injuries. I didn’t have to be in a perfectly healthy mental place, I could be engaged at any level I was comfortable with and still be a part of the work.

It was exactly what I needed. I found the monthly projects were a constant that I could count on, something that I could look forward to and be engaged with my community and fellow veterans. As I got better physically and emotionally, I became more engaged, and looked for more ways to get involved.

Enter Operation Motown Muster, a pilot program where 70 veterans came from all over the country to do five days of service in Detroit. It was competitive. I had to apply, do a phone interview, and sit on pins and needles (or just checking my email compulsively) until I found out I had gotten in.

When I got the acceptance email, I actually screeched at work. Trying to explain Motown Muster was like trying to explain the nuances of the commerce clause to my dog Frodo. One thing was for sure, they were excited for me simply because of how excited I was. 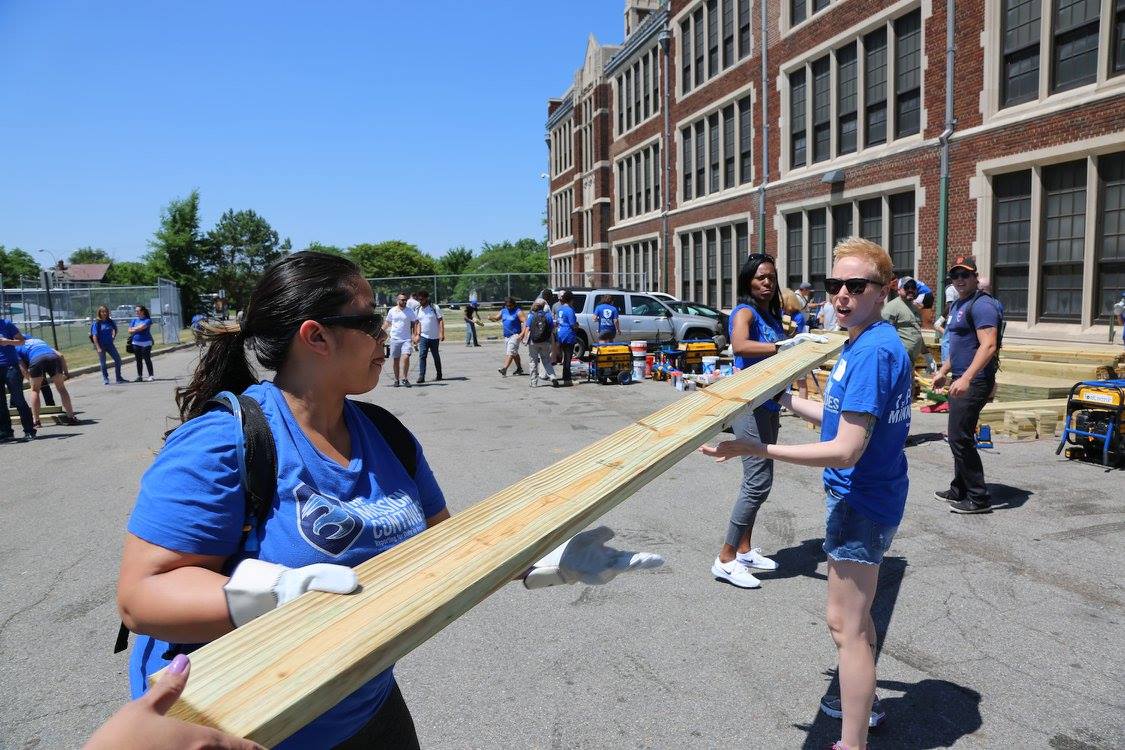 As we got closer to the date, and more information came to us, I found out I was going to be a Team Leader for some projects every day. I had moments of panic because I certainly did not feel prepared to have any responsibility at all. After my initial panic and self-doubt, I turned to my old reliable method of coping: I figured I could use false confidence until I figured out what I was going to do.

I have served in a leadership role for the past 11 years in the military as a non-commissioned officer since I was 21 years old. I am familiar and comfortable in that structure. It felt so much different when I had to lead people who were my equals. I couldn’t rely upon my rank alone. I knew I was going to have to find ways to motivate and lead people I had just met.

I brought in a bit of my attorney training for this challenge. I decided to fake my confidence until I started to feel it. It took time. The last day was when I finally found it. When given an amazing group of people with natural leaders in it, it is so easy to stand back and let them work. Our goal was to construct five benches and five picnic tables, lay mulch and anchor the picnic tables and benches in the ground. We did all of that and built an additional five picnic tables.

While my team members were building, measuring, and teaching some local volunteers how to use power tools, all I had to do was ensure they had what they needed. Seeing them working so hard and so well together without the need for constant guidance from me made me significantly more proud than if I had sat there and did all of the work myself.

This moment is better understood with some context about myself. I left Iraq in April 2008 and Afghanistan in September 2012 feeling like I had done nothing. It is important for people to understand that this was a feeling of personal failure, not commentary on the wars themselves.

Whenever I had the opportunity to interact with the women and children in Afghanistan, (which were ample because I was a medic and a woman), I left those situations feeling as if I had failed. I had failed to provide them better medical care, I had failed to be a better advocate for them in our mission debriefs. I had failed in ways I hadn’t even figured out yet.

I saw that these women and children had no bright future simply because of the place and time they were born into. I wasn’t taking my privilege and using it to help these women. I left Afghanistan disappointed in how I had handled myself as a woman as an advocate for other women.

I saw destruction, disease, and women and children being ignored and used as political pawns. I saw entire cities and towns left in pieces. I saw schools destroyed, leaving an entire generation of children without education, an entire generation of children growing up ignored. There was no urgency or desire to rebuild, because as long as the war was still going on there was always the chance it was going to be destroyed again.

When I got home, I saw so much of the same here, in the very country that I left to protect against what I saw in Iraq and Afghanistan. It was incredibly disheartening. Failing schools, disenfranchised populations, a small group of people thriving while the rest fight for survival.

I felt as if I had gone from a forgotten war to a country that had forgotten to take care of its people. I wanted to do something to start supporting my community, but I didn’t know how. It was too much for me to take on alone. When I found The Mission Continues, it was like finding a family, other people with the same desire, but with focus, resources, and a common goal.

Detroit is the perfect example of how we have neglected our own country, our cities, our children, the most vulnerable of our citizens. Getting an opportunity to go and be a part of the healing and rebuilding of Detroit gave me a chance to address those feelings of disappointment in myself that I had harbored for so long. I was not there with 70 other people to “save” Detroit, I was lending a hand, providing manual labor and supplies to the people already working to bring their city back to the glory it was.

Detroit is alive, Detroit has never been dead. There are people there that never left, they never gave up on Detroit, even when the country turned its back on the city that single handedly equipped us for World War II with its manufacturing capabilities. When Detroit comes back it will be because of the people that stayed in Detroit and kept it alive.

I must take what I saw in Detroit and bring it back home with me. I must take the joy, love, energy and enthusiasm from all the other Mission Continues veterans I met in Detroit and channel it to begin to work in my community. The same problems that plague Detroit are all over our country, and I know we have many of the same issues in my home of Minneapolis.

As I unpack what I learned, and what I can bring to 1st Platoon here in Minneapolis as the new Platoon Leader come August, I will remember that no matter how desperate things may look, there is nothing that cannot be achieved when you get 70 highly motivated people together and give them a mission, 94% of the supplies, and love.

I will always remember seeing the people from the neighborhood come out as we were working, and asking us what we were doing, and seeing them sitting on those picnic tables while talking to my fellow veterans. That was the moment I truly started to understand how much of an impact my time in Detroit would have — not just immediately, but long term. I didn’t need to tell them exactly what we accomplished that week. They will see it, they will eat at the tables, play on the playgrounds, and walk the halls of the school.

Shannon is a member of the Wisconsin National Guard and volunteers with The Mission Continues Minneapolis 1st Platoon. She will be a Platoon Leader starting August 2016.