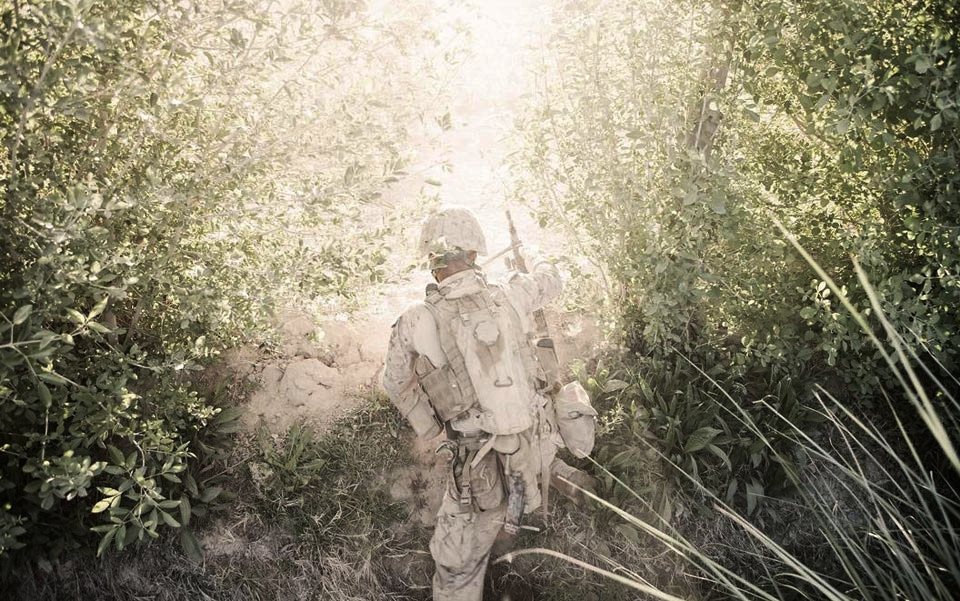 Moving Beyond the Battlefield

On February 12, 2007 I enlisted in the United States Marine Corps, pledging to defend my country against all enemies foreign and domestic. I knew that my life would never be the same, but I still wanted to serve my country as so many great men and women had done before me. I could have never imagined in my wildest dreams where this would take me and what was yet to come.

After four years, one marriage, the births of my two children and two tours to Afghanistan, my family and I were finally back home in Tennessee. We slowly began to build our lives after my military service, but there was a constant desire that I tried to dismiss.  The truth was inescapable: I missed the military. I missed my brothers in arms and I missed the family unit we formed at Camp Lejeune.  I missed serving my country and I even missed Afghanistan.

The hardest struggle I endured after leaving active duty was when I realized that I could never go back. I ambitiously tried to find a way to fill this void, to define who I am as a man, but the real challenge came when I recognized that the very element I was trying to replace was  actually the very thing that defined me. I struggled as everyone does with the never-ending obstacles of understanding the VA, enrolling in classes, and finding others who also share the unique experience of being the oldest person in Freshmen English. I simply wanted more.  I was desperately searching for a way to give back and prove that this Marine wasn’t your typical jarhead, and that even though my time on active duty had passed I still aspired for more in life. I knew that my mission continued.

I scoured the Internet for any and all ways to reintegrate into the world I had lost, and then I found it, digging in the garden of The Dream Center in Los Angeles, California.

I learned about The Mission Continues from a close friend and I was astonished by the whole idea. I saw all of the different community service projects and the multitude of veterans continuing their service and I sent in my application, hoping I would be accepted and be able to once again be a part of the community. This came at the hardest time in my life since leaving the USMC. I felt stagnant and could no longer ignore that I wanted something more. My wife and I had decided that I was going to take a break from school and reevaluate our family’s future — every job that I applied for had fallen through and I had nowhere to turn.

Since the day I got a call from The Mission Continues that I had been accepted for the 2013 Alpha Class, my life has never been the same.

Just weeks after the call, I found myself knee-deep in a garden covered in dirt, installing a sprinkler system. More importantly, I found myself knee-deep in my thoughts; beginning to remember who I am as a person, man, father and Marine. I found it — my people, my community and my new unit. It was right here at home. Over the course of the weekend, a few things became very clear to my new family and me. Our experiences, struggles and strife were all shared, and my newly found gardening skills were not just for the service we were providing for The Dream Center but were also for our well-being. The drive we had to serve our country was now being utilized back at home. Together we learned that we were not alone, that we want to continue our service and we were all getting better. While spending this time serving with my fellow brothers and sisters, I sincerely felt assured that everything was going to be okay. 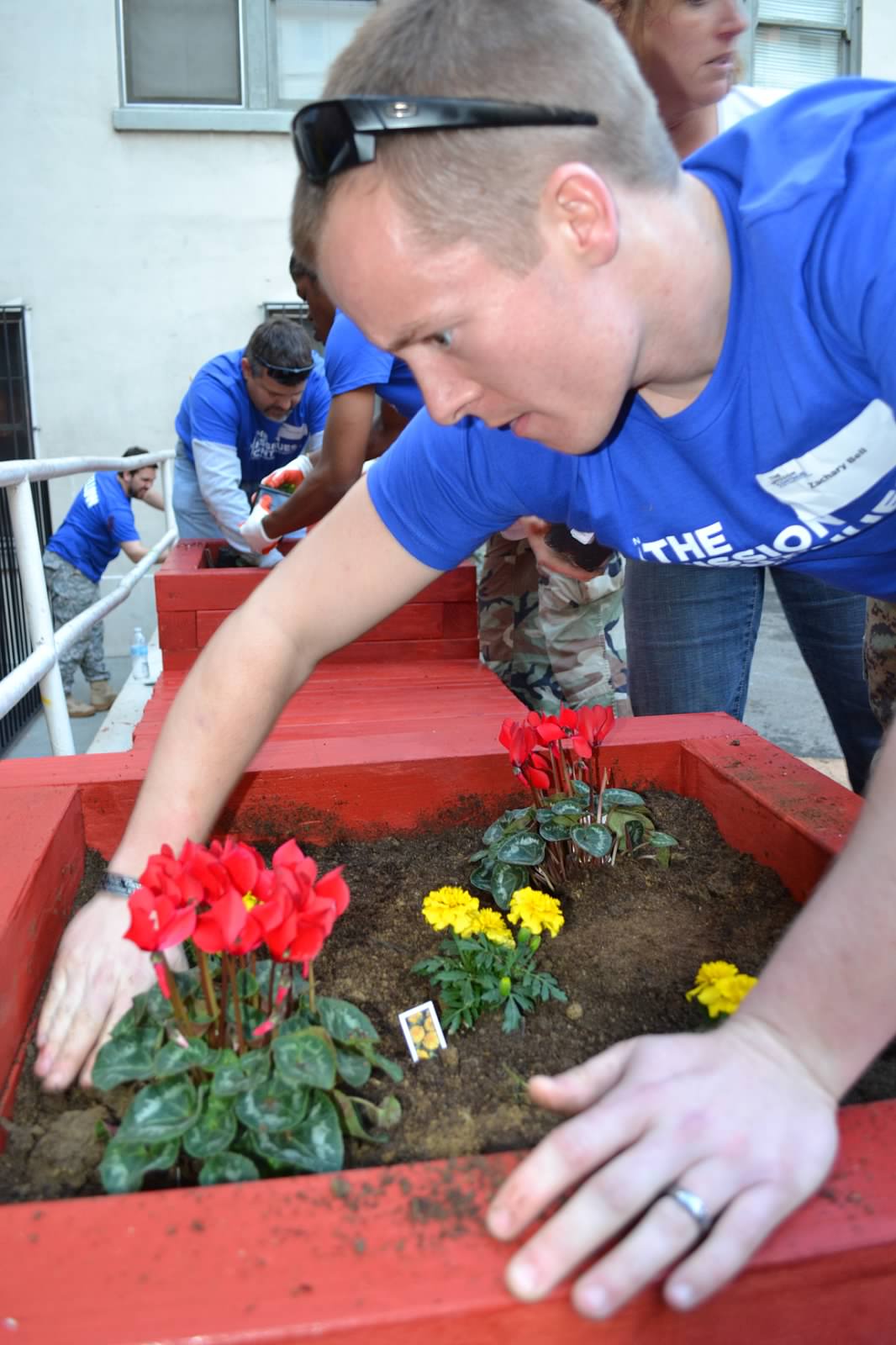 My time in the USMC had taken me to the other side of the world and I have seen things that have shaped the man I am today. And for too long the horrors of war have left scars on my soul that run deep. It changed my overall perception of life and left a bitter taste in mouth. A taste that distanced me from others, leaving me blind to the answer that was hiding in plain sight.

After we finished our service project for the day we prepared to load our buses and were stopped every step of the way by people thanking us for what we had done. For the first time in a long time I remembered feelings that had long since been forgotten: how it feels to help my fellow man as we move forward together making our immediate world a better place than how we found it.

Twenty-six weeks later my fellowship ended and I have been able to turn a passion into a profession by taking on a position at my host organization, Courage Beyond. At Courage Beyond we provide free mental health services for all military members and their families. Now I’m back in the fight, continuing to serve my local community and helping others who felt the same way I did not too long ago by teaching them that there is hope and together we can continue to serve. My new unit is not restricted to any border and expands nationwide.  The entire network of Mission Continues Alumni like myself maintain constant communication and strengthen our resources as we complement and assist each other daily. Even with all of the trials and tribulations my enlistment brought upon me, I am thankful for it. Otherwise I would be missing the amazing things my brothers and sisters are accomplishing every day. 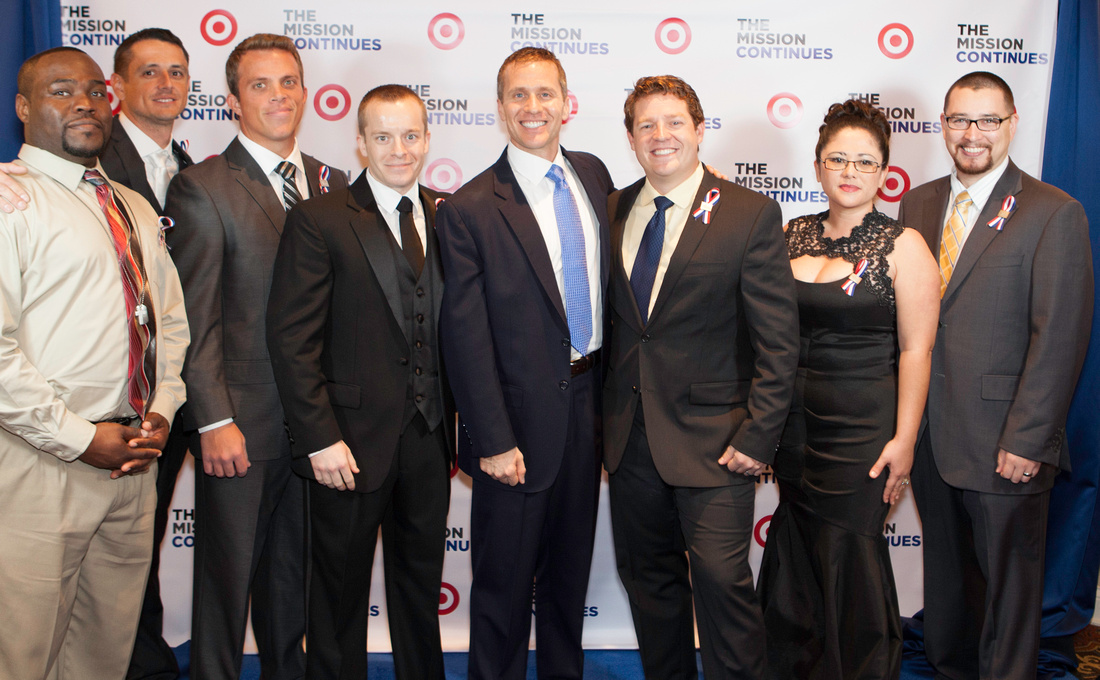 In D.C., one Fellow was able to organize a food drive for hundreds of families, and was even able to get the First Family involved in giving a meal to others that would otherwise go without. In San Diego, members of Team Red White & Blue and community volunteers joined our 1st Platoon San Diego to rebuild Mt. Hope Community Gardens. First Platoon Orlando has been offering mentorship and high-impact service projects like building playgrounds and refurbishing Boys & Girls Clubs, and 1st Platoon Phoenix conducted a three-night street search to identify more than 75 chronically homeless veterans and connect them to critical services in their communities.

World War II Veterans have been called the greatest generation of our nation’s history; many others and myself would agree.  But the time has now come for a change of guard. Veterans must come together as one, and all across the country, Mission Continues Fellows and Service Platoon Members are stepping up and accepting the call. They are continuing their service for a nation and community whose shared legacy will be one of action and service.