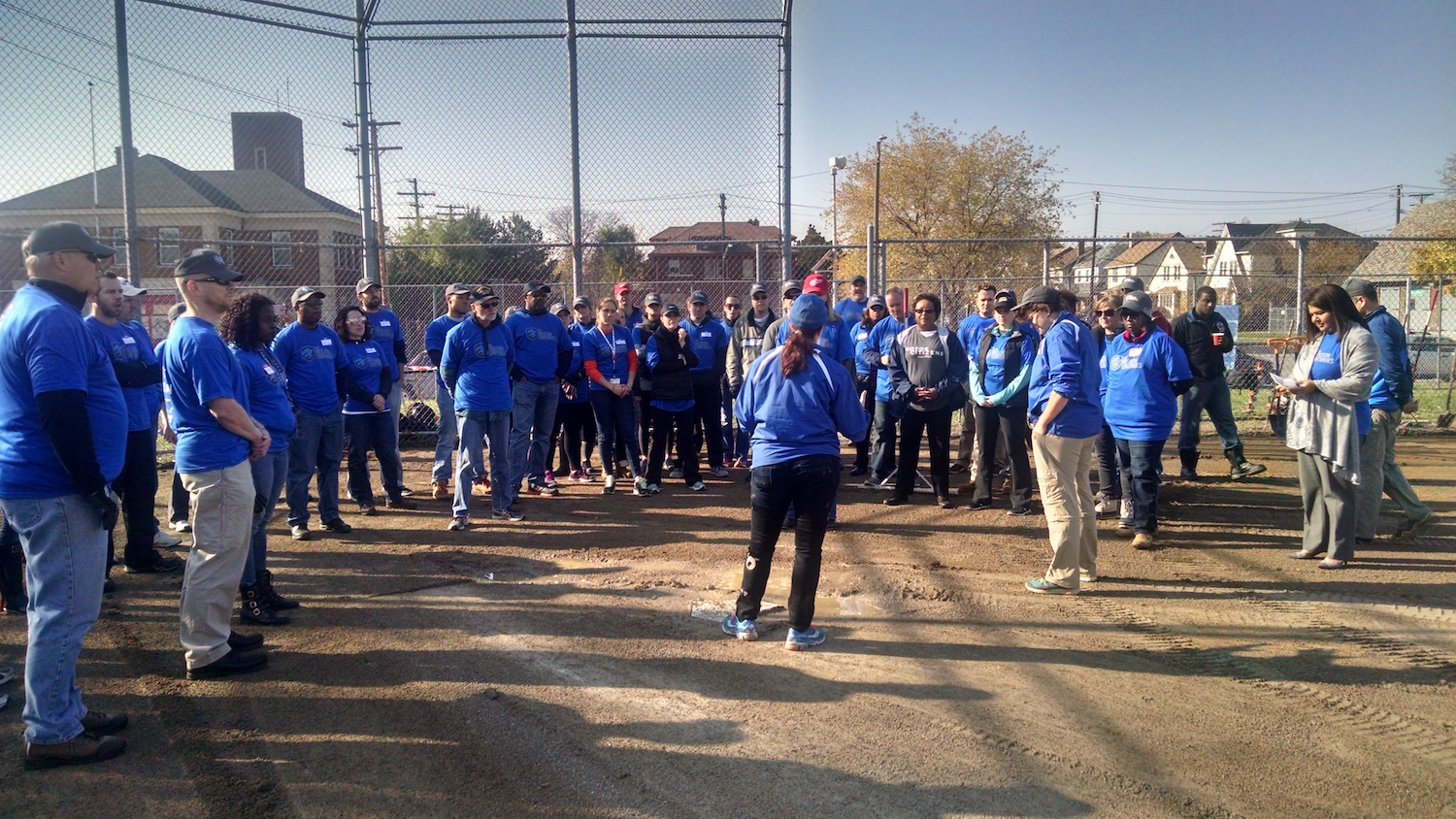 Martin Luther King Jr. dedicated his life to making America more equal and free. His words inspired many to join the Civil Rights Movement, and still inspire us today. At The Mission Continues, this legacy moves us to continue strengthening communities through service. “The main pillars of Dr. King Jr.’s mission and legacy — peace, justice, equality, freedom — are some that certainly resonate with others who have dedicated their lives to service,” says Emily Ferstle, our City Impact Manager in Detroit.

We hold MLK Day especially close to our hearts because, as Emily puts it, our volunteers “in many ways, are standing on his shoulders and those of the many who have come before us to seek justice and healing, for ourselves and for the most underserved, marginalized members of society.”

In today’s blog, we want to highlight just a handful of this year’s many service projects honoring Dr. King and what he stood for. 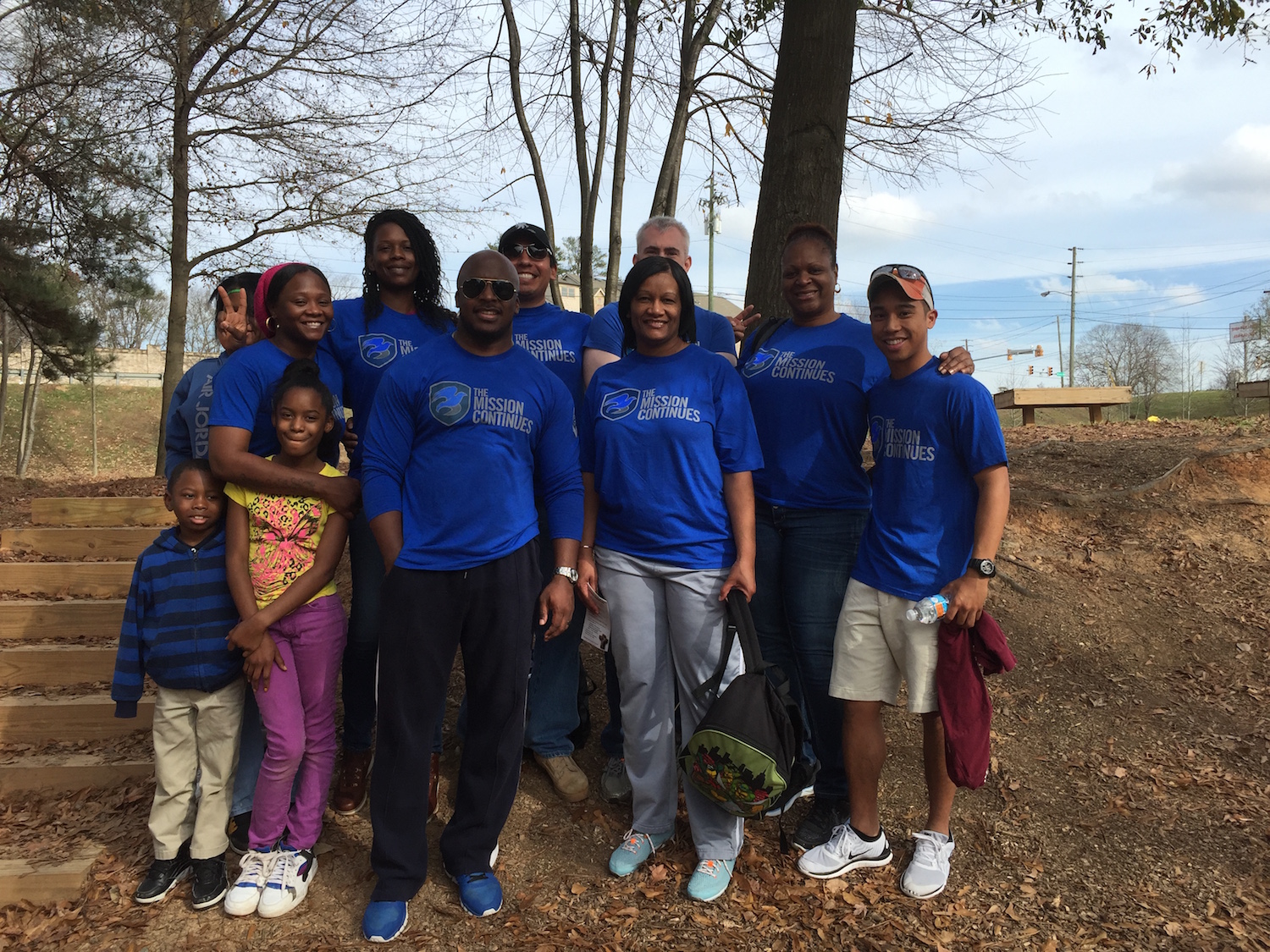 The Atlanta 1st Platoon at a previous service project

We will begin in Atlanta, where it all began for Dr. King. His hometown is where he attended college, became an assistant pastor, and in 1957, began his tenure as chairman of the Southern Christian Leadership Conference. Atlanta is also where King was arrested for the first time during a sit-in demonstration in 1960.

In the very city of his birth, life, and final resting place, we will honor him through service. Next weekend, the Atlanta 1st Service Platoon returns to Bellwood Salvation Army Boys and Girls Club. With projects for the entire family, the platoon will be focusing on painting a learning center and benches, in addition to preparing garden boxes for the neighborhood’s youth to use and enjoy.

Photo of the Detroit service platoons at Central High School during a previous project.

In Detroit, Dr. King joined the 1963 Walk to Freedom and delivered a speech that would later develop into his “I Have a Dream” speech. Detroit’s Walk to Freedom had an unprecedented 125,000 person turnout and played an essential role as a “practice run” for the highly publicized March on Washington.

To honor the role Detroit played in the Civil Rights Movement, we continued the work we began at Central High School during Operation Motown Muster, when we worked for an entire week to help revitalize the city.

“When the students and teachers were asked what their top priorities were for improvements around the school, FRESH PAINT was the resounding answer,” said Emily Ferstle, who is the City Impact Manager in Detroit. For the MLK Day of Service, the Detroit 1st and 2nd Platoons took the school’s request for a fresh coat of paint and teamed up to paint hallways and bulletin boards throughout the school.

These aesthetic differences help encourage the students to succeed put their best foot forward. Emily explains, “new paint and the right colors have the ability to evoke feelings of belonging, motivation and safety. Additionally, helping with the upkeep of Detroit’s oldest high school sends the message to the students and teachers that they are valued.” 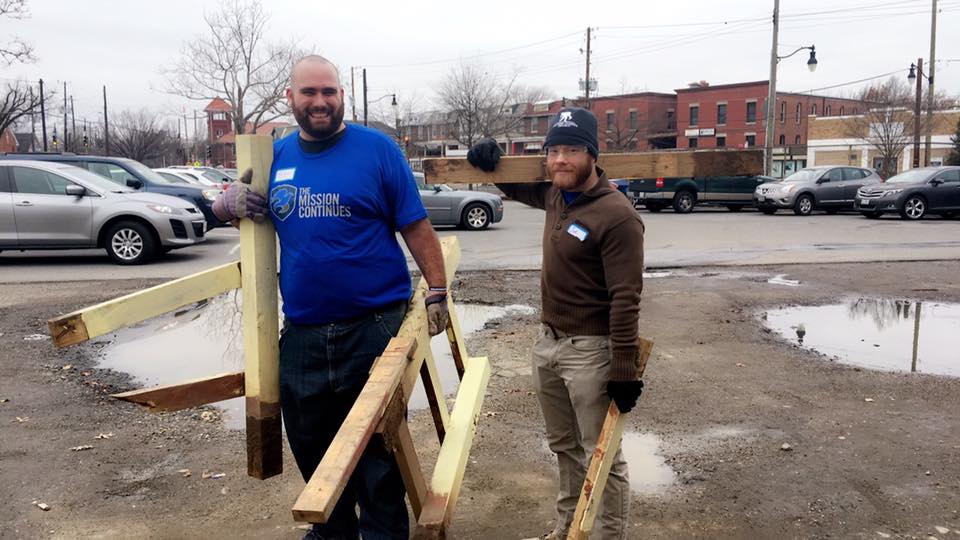 As the nation’s capital, Washington D.C. served as a national stage for the Civil Rights Movement. As we all know, it was where Dr. King delivered his first national address in 1957 at the Lincoln Memorial, and returned in 1963 to deliver his famous “I Have a Dream” speech for the March on Washington. As this is perhaps King’s most iconic moment, it’s only fitting that we serve in this city for MLK Day in an iconic way — on Martin Luther King Jr. Boulevard, right on the MLK Day parade route!

We returned to Democracy Prep in Congress Heights to build a shed for the school’s garden, refinish the school’s stage, remove dilapidated outdoor seating, do some painting, and more. These things will make a visible difference, as Connor Mallon, our City Impact Manager in D.C., tells us the school “is located in one of the most underserved areas of Southeast D.C. and the disparity and need can be blatant.”

When veterans serve in this community, their pasts can sometimes bring them and people in the community closer together. Connor explains, “many of us have struggled to overcome hardships at home and at war. These parallels can be an important icebreaker when we’re engaging with struggling communities.”

Remembering our past can inspire our vision for the future. This is a day we celebrate the accomplishments of the civil rights movement, and use its memory to remind ourselves that there is still much work ahead of us. Along these lines, Connor mentioned that the closest thing to Dr. King’s dream of equality he’s experienced was being in the military. He saw “men and women of all backgrounds and ethnicities fighting together for a common purpose.”

He concluded, “I hope that our veterans and the community members who attended our project walked away with that same sense of unity.” With this, we can work together, side by side, to build a better tomorrow for ourselves and the next generation of Americans.