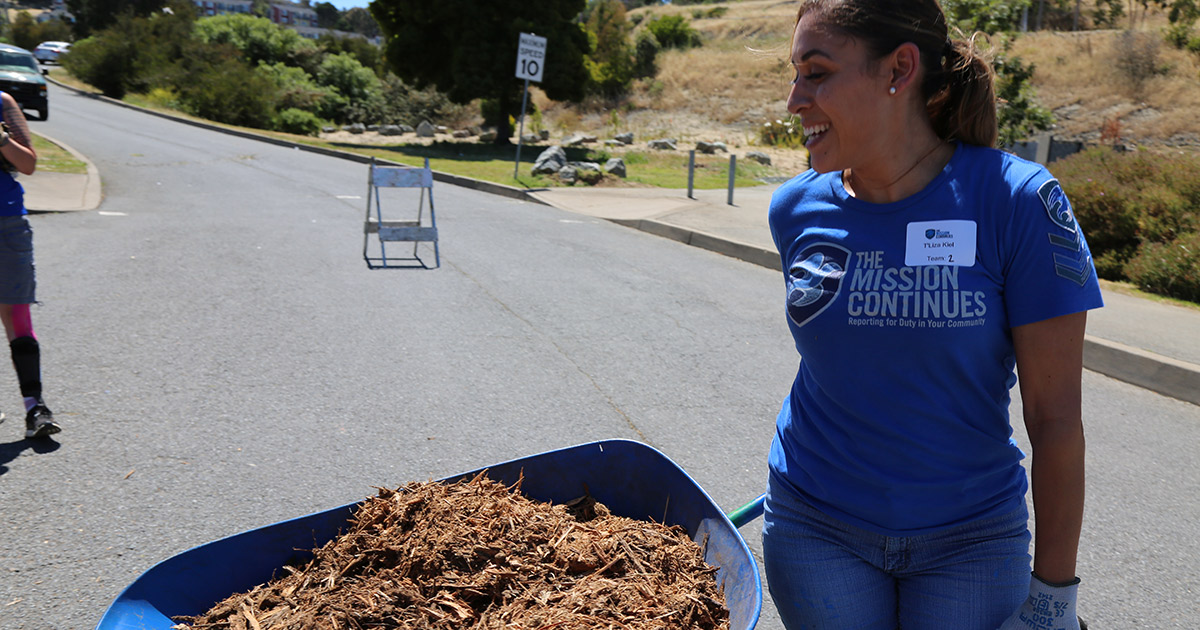 Hey there! My name is T’Liza Kiel and I am overjoyed for the journey to come as the Director of Alumni Engagement!

As an alumnus myself, I look forward to the challenge ahead. The Mission Continues has done an outstanding job at engaging veterans, service members, their families, and supporters in collaborative community efforts. Each program implemented through The Mission Continues has made a great impact on the individual lives of participants and the people they were able to influence — and continue to influence.

TMC programs have influenced the person I am today and the things I have accomplished. I can only imagine the continuous impact of the close to 2,400 TMC alumni that are making throughout our nation. 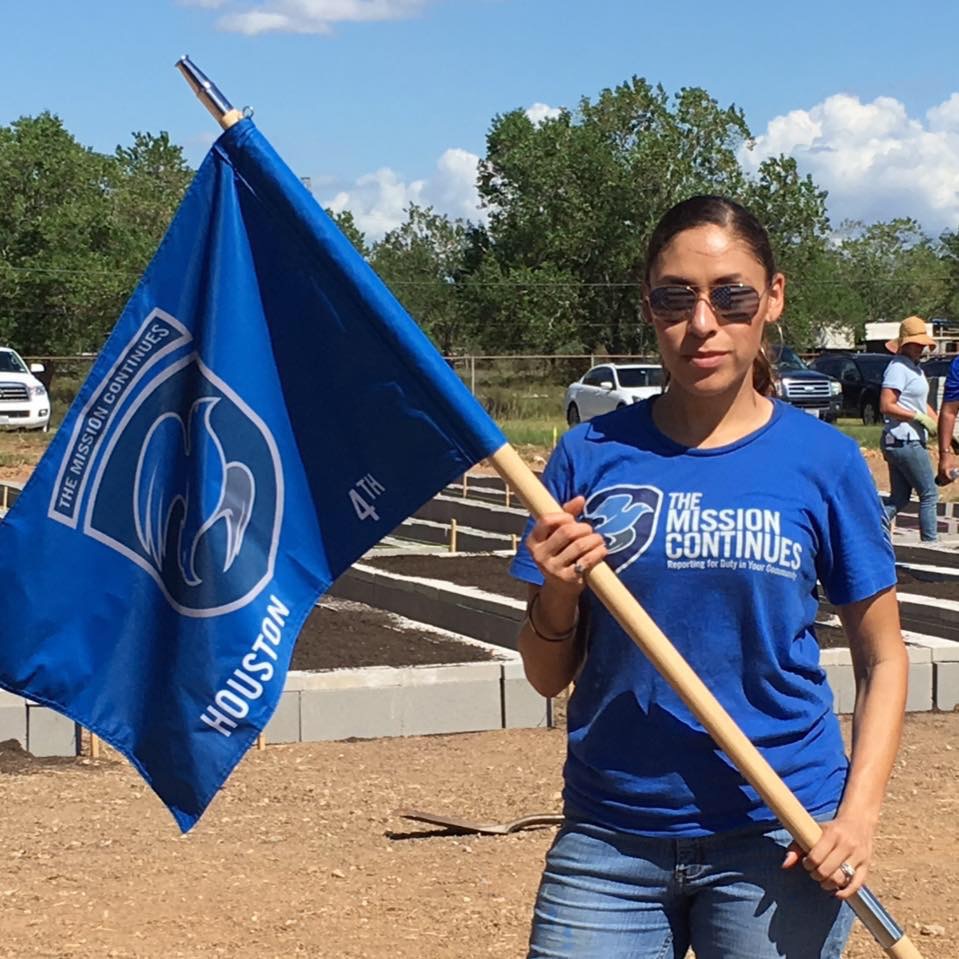 Me as a platoon leader in Houston

I joined the Texas Army National Guard after my high school graduation. Much like many of the communities that we serve at The Mission Continues, my high school as of 2017 had a 16.9 poverty percentage. College was a priority for me, yet, I also needed something fulfilling (and quite frankly, a backup plan) that would provide a sense of security. 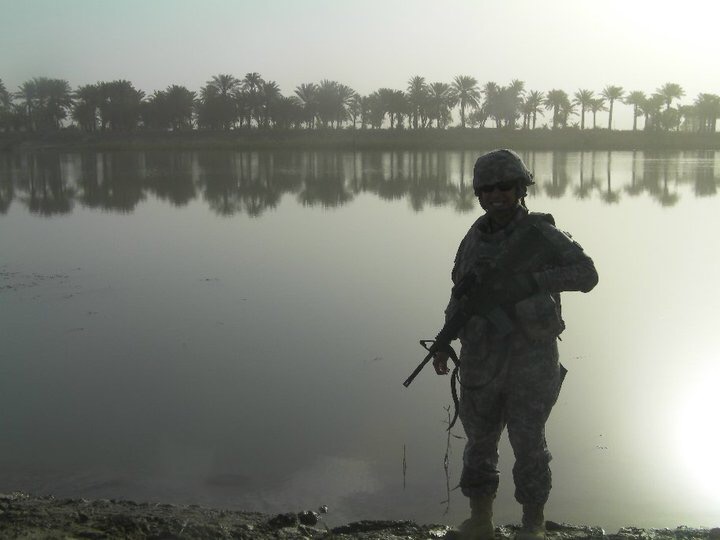 A glimpse of my time in the military

The military provided what I sought and more; a college education, an experience and life lessons that will continue to lead me to this day. My experience in Iraq was just that — ‘an experience,’ from the good, the not-so-good and the faces I will never forget.

A year after my deployment I attended graduate school. The sad truth of transition and the invisible wounds of war began to surface, and for me, it looked and sounded like the many notifications of suicides from my previous brigade, and with that I began to study mental health, specifically in relation to veterans and identities among women veterans, especially those in leadership positions.

Throughout my studies, I also learned the many positive outcomes and characteristics of those that volunteer. As I look back on this particular chapter of my life (2011-2014), it never once occurred to me that my experiences both external and internal would come full circle.

Although I primarily served in a reserve branch of the military, I managed to maintain active duty orders and to stay busy. When I wasn’t in school I was on military orders, in a military training school, or deployed. When I officially got out in 2013, the decompression of having somewhere to be and a constant sense of responsibility innately began to weigh on me.

And unbeknownst to me, I began to spiral down a dark hole. This is where my story gets ‘real’ — you see, many people fear transparency for a plethora of reasons, yet I have learned that often times, this part can change lives — and save lives.

Although I was excelling academically in graduate school, I was secretly drinking heavily and battling thoughts of achievement and normalcy. I leaned on alcohol to feel comfortable in normal settings. I felt defeated in life because all I could account for was my academics and my military experience, which amounted to almost nothing to most employers. 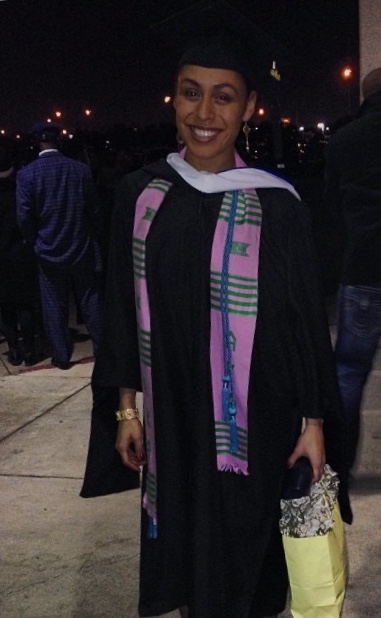 My grad school graduation in 2013

During this period I also experienced two failed suicide attempts (and that’s all I’ll say about that). In 2014, I gained employment with a local mental health authority as their Veteran Volunteer Coordinator. My role there was to connect with veterans in the community and provide peer support opportunities. Through this role, I would get connected to the world of Veteran service organizations, including The Mission Continues.

When I tell people that The Mission Continues nearly saved my life, I mean it. If memory serves, I was introduced to The Mission Continues late 2014 or early 2015. The Houston 4th Service Platoon was getting ready to launch with its first platoon leader. I met Pamela Johson at a local peer group where she discussed the area of preference for her service launch — and behold, it was the area where I grew up!

She and Barry Mattson spoke eloquently and passionately about the service project opportunities and what The Mission Continues was doing nationwide. I was sold from that moment on.

Our first project ended up being in my hometown of LaMarque where we were able to refurbish a local baseball park called Bobby Beach Park. As it turned out, both my husband and I had played in this park as youth ourselves. 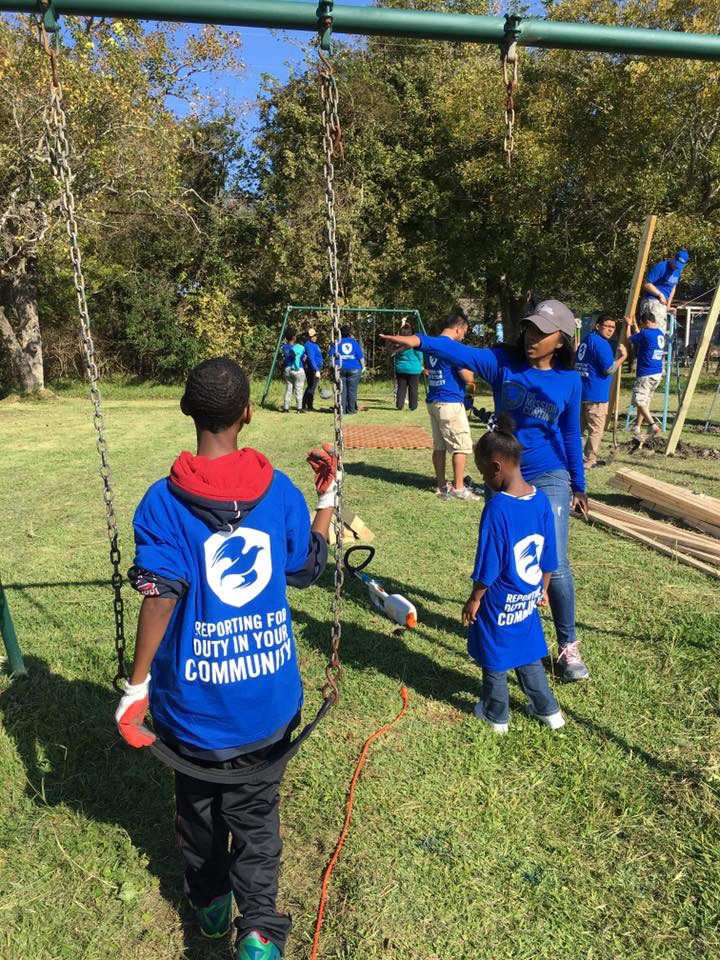 Since I was introduced to The Mission Continues I have realized that I still have a purpose, that my unique skills from my time in service could still be utilized and that there was hope for neighborhoods similar to the one I grew up in, because of this organization. I drank the blue Kool-Aid!

Since my introduction to The Mission Continues, I have participated in countless service projects, served as a platoon leader, attended the Women Veterans Leadership Summit, and supervised a fellow during the Fellowship program. Through this organization, I not only gained a sense of mission and purpose but also friendships and experiences of a lifetime. 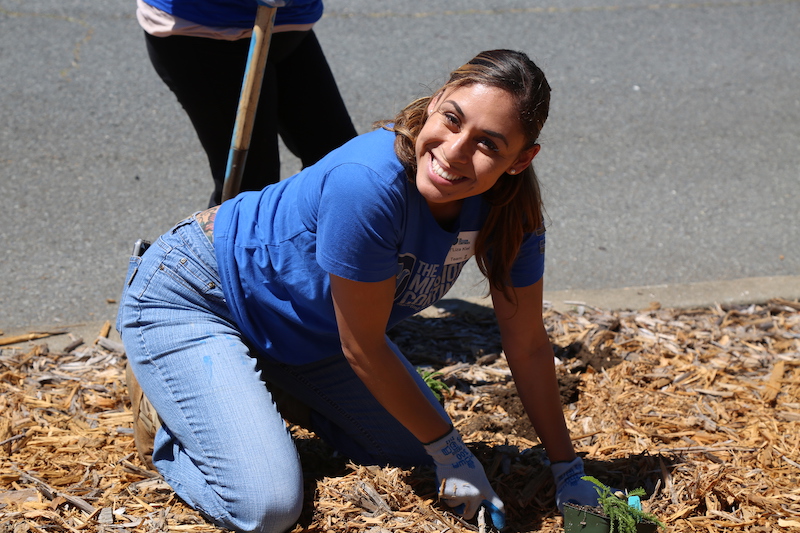 Me at the Women Veterans Leadership Summit in 2017

I hope to engage program alumni in a way that inspires that same sense of purpose and personal growth even after their program has ended. I do not have all the answers, but my promise is to create a program that includes the faces that made this happen. I look forward to engaging and working with you to create an outstanding program for our TMC Alumni!