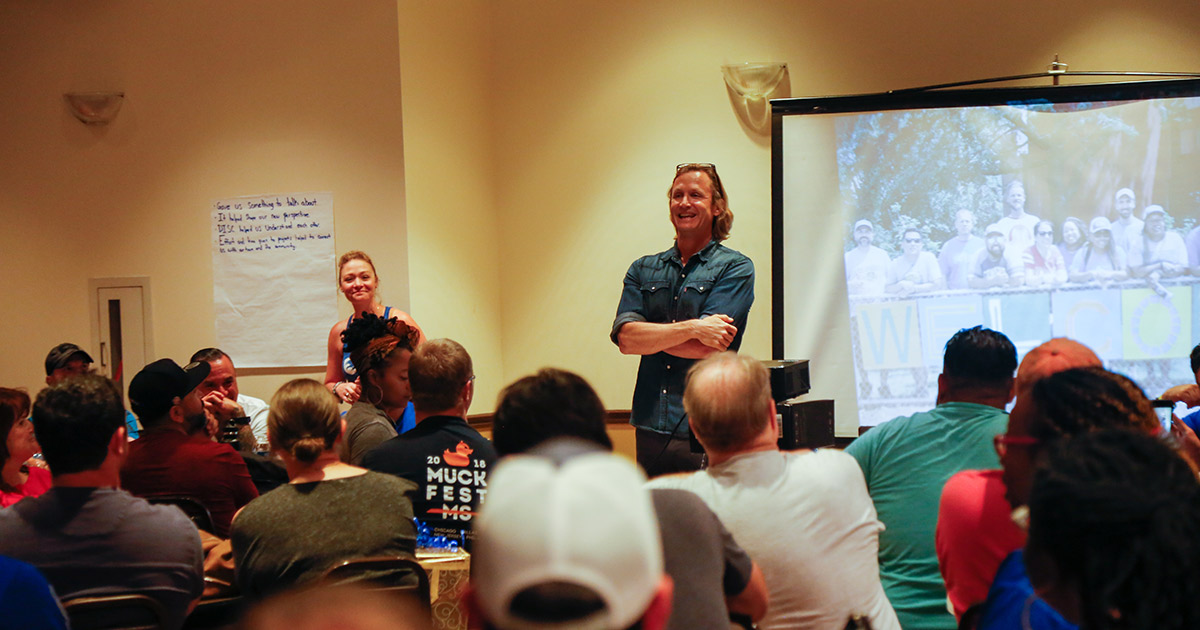 This Grand Experiment: A Farewell from Spencer Kympton

We all endure transitions in our lives – changes in home, family, health, age, profession, and capital are part of the human experience. I’m no stranger to change, but I’ve not found comfort in how to mark change with words. Today is my last as President of The Mission Continues. As I hand over the privilege of leadership to my colleague and friend, Mary Beth Bruggeman, how do I properly convey what this organization means to me, and the countless ways this veteran-led service movement has fulfilled me? While the perfect words escape me, I take comfort in knowing that transitions, and hand-offs, are not just elements of the human experience – they are the foundation of the American experiment.

Nearly 250 years ago, fifty-six men stood in Independence Hall in Philadelphia in defiance of tyranny, with visions of something new. They penned the Declaration of Independence – with its lofty ideals and self-evident truths – to become the central hypotheses of our grand American experiment. A few years later, thirty-nine men gathered in the same place, with renewed aspirations. Emboldened by early–but Revolutionary–results, they framed it further – enacting laws to govern its ongoing execution. The Constitution was born, and so, the experiment continued.

Ever since, as a nation we’ve been testing and tinkering and failing and discovering within this experiment. Our efforts are long-term; no single “scientist” is in charge and no one group will see it through from initial question to conclusion. Only eleven years separated the signing of the Declaration of Independence and the Constitution, yet only six men signed both. Then – and now – our experiment lives on through a long series of hand-offs from generation to generation.

Crucible (n): “A situation of severe trial, or in which different elements interact, leading to the creation of something new.”

The social scientists who tested the hypothesis of the United States over the generations have done so in the belly of many crucibles. In the mid-1800’s, social scientists like Frederick Douglas, Harriet Tubman, Sojourner Truth and Abraham Lincoln forged their work in the crucible of the Abolitionist Movement. The early 1900’s brought Susan B. Anthony and Elizabeth Cady Stanton, and the crucible of women’s rights. A half-century later found Rosa Parks, Cesar Chavez, John Lewis, Clyde Warrior, Harvey Milk, Marsha P. Johnson, Gloria Steinem, and the King family hard at work in the crucible of civil rights.

Each persevered through great trials, each brought many elements together to interact, and each created something new: an America that inched closer to proving its initial hypothesis.

Like our country, The Mission Continues is founded upon an important hypothesis: that military veterans possess a deep desire and strong ability to strengthen this country from within – one neighborhood at a time. They forged their impact first in the crucible of military service, and are now doing it again in the crucible of community service.

The thousands of men and women serving with The Mission Continues are themselves continuing this grand experiment. As they work to rebuild schools, revitalize and repurpose public spaces, protect our parks, and provide safe passages and healthy experiences for our youth, they accept the hand-off from the long line of those who have blazed trails before them.

Today is my own day to hand-off. Tomorrow, Mary Beth and her mighty team, alongside tens of thousands of others, will rejoin forces to continue pushing America inches closer to becoming the country that fifty-six men once hypothesized could someday exist.

May our Mission, and this Grand Experiment, continue long into the future-

P.S. Please invest in this next chapter of The Mission Continues by making a donation in support of our veteran leaders.