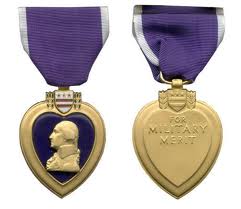 This is Part II in a series on the legacy of the Purple Heart. The medal, originally called the Badge of Military Merit, was established by George Washington on August 7, 1782. The date is now recognized annually as National Purple Heart Day.

The Purple Heart has spent more than half of its 232-year history in relative obscurity. Following General Washington’s establishment of the medal in 1782, the medal would be not be issued again for another 150 years. The medal was revived after World War I at the behest of General Douglas MacArthur, and officially established as the Purple Heart following an Executive Order from President Herbert Hoover. The date chosen to issue the Executive Order was February 22nd, George Washington’s 200th birthday.

A decade later as American troops fought their way across the Pacific, the criteria for the medal were again amended. Retroactive to December 7, 1941, the medal was to be issued only for fatal and non-fatal wounds. Recognizing the changing nature of combat and the role of the military, those wounded in acts of terrorism or injured in friendly fire now qualify as well. In total, The Purple Heart has been awarded to an estimated 1.7 million service men and women.

The most recent conflicts in Iraq and Afghanistan have ushered in a new generation of Americans to be awarded a Purple Heart. Pam Larson, a Mission Continues Fellow and 2013 Military Spouse of the Year, was awarded a Purple Heart after being shot in the leg following an IED blast in Iraq. For Larson, the sacrifice was just part of the job detail.

“We all have our own battle stories,” she said. “I was just doing my job.”

Larson is now serving her Mission Continues Fellowship with the Boy Scouts of America, mentoring scouts and empowering them to achieve their own individual goals. Her continued service harkens to General Washington’s famous declaration to the New York Legislature:

“When we assumed the Soldier, we did not lay aside the Citizen.”

Throughout its lifetime, the Purple Heart has gone by different names, criteria for eligibility and physical representations. Yet, the enduring legacy of the award remains. One side of the medal still reads “For Military Merit,” and the circumstances of the medal so often resulting from acts of “extraordinary fidelity.”