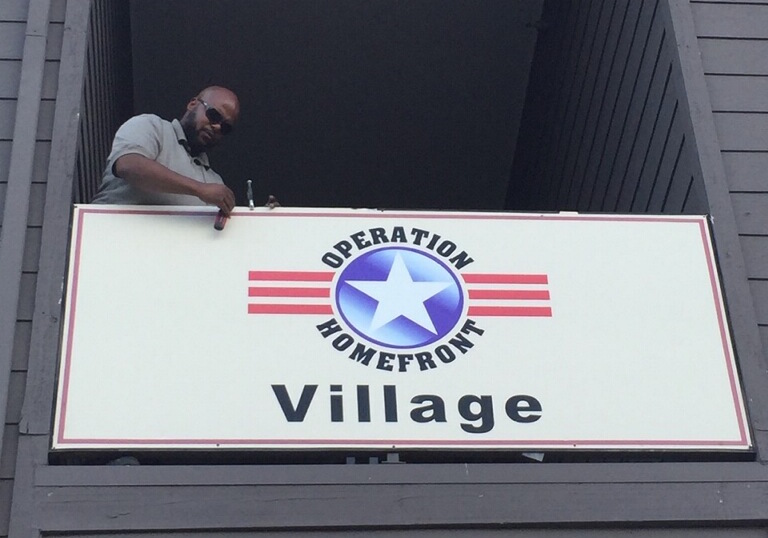 How Disabled Veterans Proved Them All Wrong

Today we bring you three stories directly from veterans who have overcome incredible challenges post-military, and are now changing their lives and others’ through their Mission Continues Fellowships.

From their stories you will get a glimpse into what happens when veterans are told, “we still need you,” and are given the opportunity to serve again.

David Merchant: “I took it as a challenge”

Growing up in the south side of Chicago, David’s father, a Marine, taught him to strive for a better life than what they had. However, David enlisted in the United States Army in 1999 not to escape Chicago or follow in his father’s footsteps, but to “make a difference and be a better person,” he said.

Guided by this ambition to make a difference, he deployed three times in support of Operation Enduring Freedom and Operation Iraqi Freedom. While deployed, David sustained a Traumatic Brain Injury and a broken leg. He said, “This instant took away a lot from me. I was in for the fight of my life.”

Less than two years later, he suffered a Brain Aneurysm and then a Cerebellar Stroke, leaving him paralyzed on his left side. He had to re-learn how to do things like walk and speak. Just like that, his 16-year military career came to an abrupt end.

“Many people would roll over and quit at this point,” said David, “I did not. When the doctor told me I was incapable of doing anything, I took that as a challenge to prove not just him but everyone wrong.”

David began a master’s in logistics and project management. Knowing he wanted to continue to make a difference while at school, his wife found The Mission Continues via Wounded Warrior Project. He jumped head first into the Fellowship Program.

David now volunteers at Operation Homefront, a nonprofit that provides services to military families. Operation Homefront’s transitional housing, counseling and support helped David immediately after his separation. David is motivated to give back and help others whose struggle he knows all too well.

David serves as the Outreach Coordinator in their transitional housing program. He helps plan all social services and activities for service members and families, and created a morale and recreation program for residents. “I established the BEITZ (Bring everyone in the Zone) group to not just take care of the service member but the family who also suffers from the wounds of war,” he explained.

He continues, “The Fellowship enabled me to not just show them I was still capable, but it proved them all wrong. The Fellowship showed me and the world I can still serve, I can still give back to society in a positive way.”

To get a glimpse into what this means in his everyday life, perhaps this anecdote illustrates the momentum David’s fellowship gave him:

“When I moved into my house I was in a wheelchair.  My neighbors looked at me and most felt sorry for me (they would tell me this later).  When I got back from Orientation I was pumped.  Motivated to rock it.

I would go to my site and work and complete every project given to me.  I would then go home, make sure my exoskeleton was tight, get out and mow my grass with my Mission Continues t-shirt on.

My neighbors I talked about before would come over and say, ‘Man, you are impressive–you have fought through a lot.’  And then they would also ask about The Mission Continues and how they can get involved.  They saw the change in me and wanted it as well.

“My time in the military was brief, but it changed my life,” said Sarah Modling.

When Sarah enlisted in the United States Army in 2000, nobody could have predicted what would happen that very next year.

After the terrorist attacks of 9/11, Sarah deployed to Kuwait and Iraq, following the troops on the frontlines wherever they needed to go as a petroleum supply specialist. “I didn’t realize how stressful deployment was until I came home. Things were not the same for me,” she said.

When she was discharged from the Army in 2003, three years later, “the double whammy of being a single mother and transitioning into civilian life left me feeling like I didn’t know who I was.”

Sarah described the challenges she faced when returning home. She became depressed. She turned to alcohol. She went to the VA for help, but they didn’t know how to help her. She fell through the cracks. As a result, she lost trust in the VA and began self-medicating.

She said that it had gotten to the point where she had forgotten how to talk to people. She avoided phone calls, even from her family. Then, after surviving three suicide attempts, she said, “it became my mission to defeat the anxiety, depression, and PTSD that I had endured.”

She had gone through a lot, and changing course wasn’t easy. She said, “Over the years I’ve told myself, ‘you’ll never be able to work, you’ll never be mentally stable.’”

But now, for her fellowship, she has to do that several times a week for the American Red Cross. Where she lives in Clarskville, the Red Cross provides services to active duty and military retirees. Part of her role is to connect people with these services, by reaching out to them in person and over the phone. “I’ve proven myself wrong. I’ve been able to come in just about every day and work with the community, talk to new people, face to face and over the phone.”

She concluded, “Sure, there are days when I don’t want to leave my house, but I push through because I know people are counting on me. The fellowship has helped me realize that I definitely have a purpose of being here on earth.”

LC Shelton: “I hope to fill a void in life” 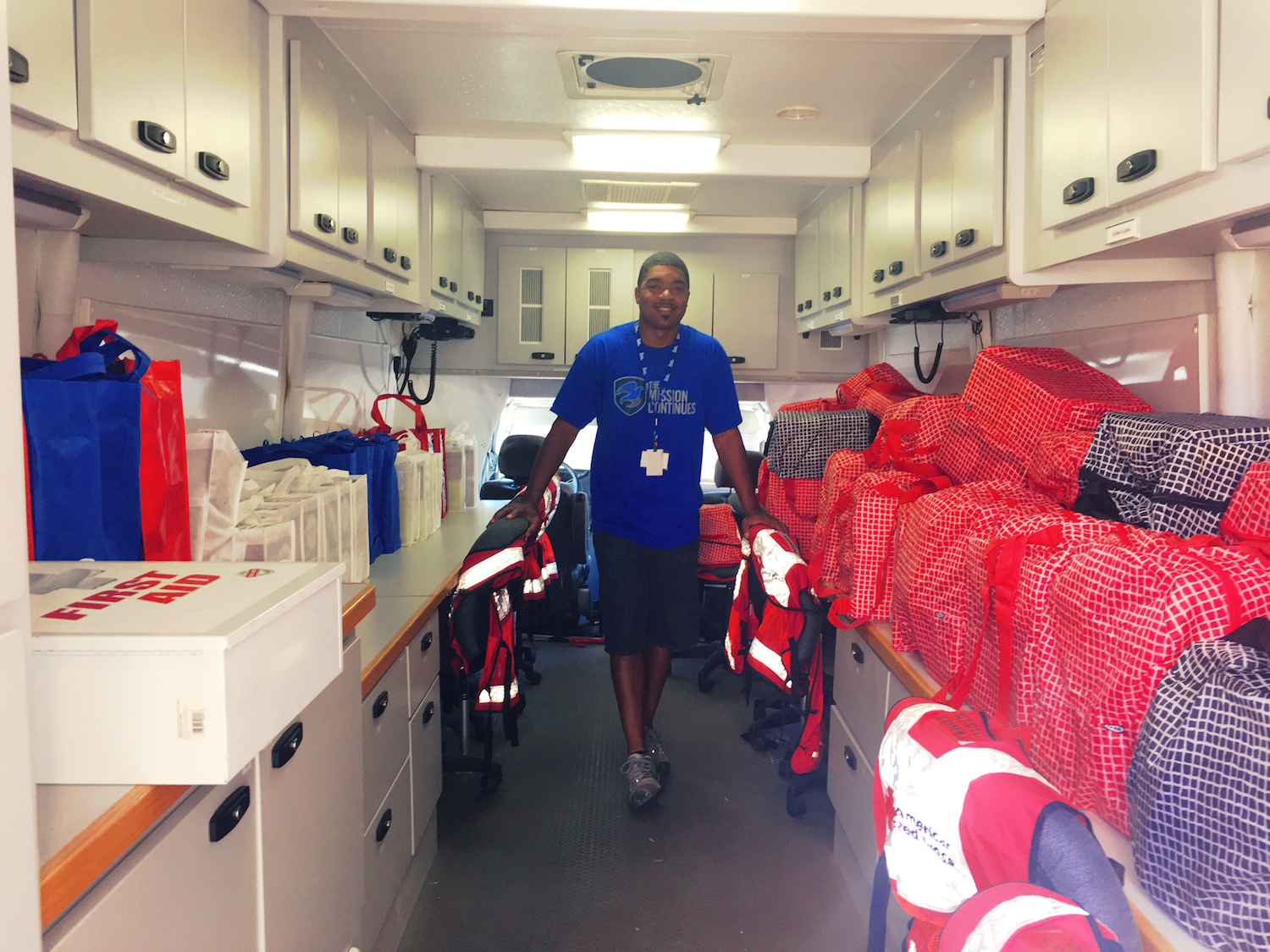 “In 2007 I answered the call to serve, and the ranks of the United States Army is where I chose to stand,” said LC. “I made the choice because there was a nagging urge to be there for others that could not stand for themselves.”

While stationed in Fort Bragg, LC was severely injured during a training event. “Everything was gone in an instant,” he said. “I found myself waking up to the beauty of another day, only to remember the darkness hovering around me like a wraith. Demons whispered in my ear that it’s easier to just let go.”

It was only by talking to others who understood what he was going through that he was able to see that he wasn’t alone. But he had more challenges awaiting him. After being honorably discharged from the Army, LC took time to recover. But during recovery, the bills kept piling up. Unfortunately, his arrival back to the civilian world was marked by divorce and homelessness.

He eventually found employment with the military contractor company Lockheed Martin, and then moved to the Pentagon from there, where he worked for seven years. When he heard about The Mission Continues, he was motivated to serve and earned a fellowship to volunteer at The Red Cross.

This choice was personal because he’d seen their work firsthand. LC explained that he was inspired to serve there because, “During my active duty with Army I worked side by side with The Red Cross and was able to see the impact it had on the lives of so many. That left a lasting impression on me.”

By pursuing his new mission, he said, “I hope to fill a void in life that only helping others can fill, thus making my life and future a full and rewarding one.” On top of that, the fellowship has given him a new sense of confidence.

“This fellowship has taught me that I can still utilize the skills that gave me strength and guidance throughout my military career to aid civilians.” Ultimately,  “Even with my injuries, I can still be a part of a positive force that promotes change and generates hope.”

The Mission Continues is proud to connect veteran leaders to community service through our programs, but we need your support to continue the work our volunteers do in communities–please donate in honor of National Volunteer Week!