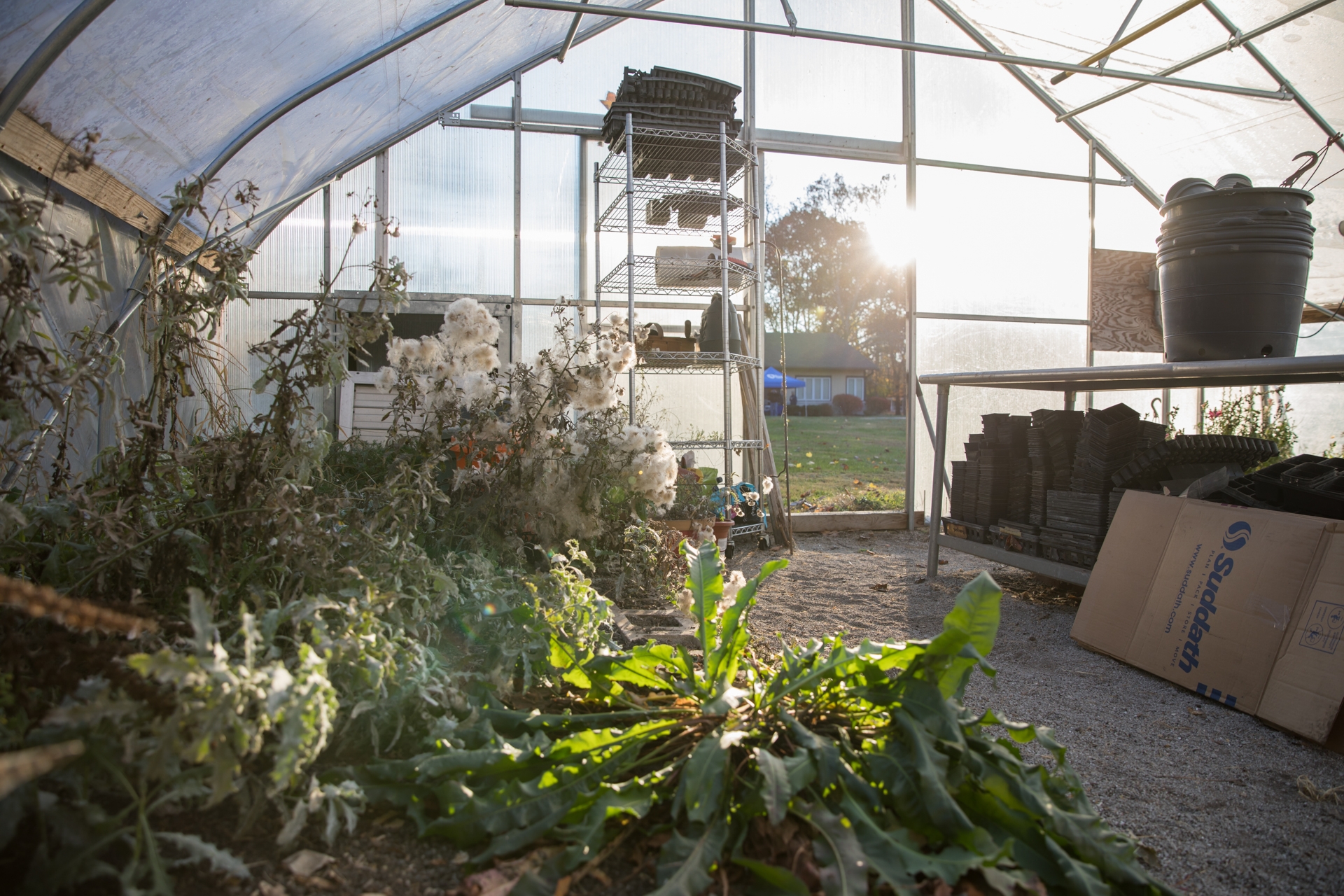 This event was a new opportunity for the Columbus 1st to help fight food insecurity through the creation of an urban farm learning lab! Through a partnership with Hamilton Township High School and the YMCA of Central Ohio, the platoon was able to rehab an old greenhouse and the surrounding outdoor space at Hoover YMCA Park which is about ½ a mile from the high school. Students and staff from the school joined veterans from The Mission Continues for this impactful day of service.

Kim Tapia, a member of the Columbus 1st Leadership Team stepped up to lead the project. 20 volunteers including nine veterans and six students put in 90 volunteer hours total for our Veterans Day campaign with Hamilton Township High School (HTHS).

It was an awesome day with good people and a great project for the community. I will definitely do more projects in the future. Being involved with The Mission Continues has really opened my eyes to see that our community needs help and I’m happy to be involved.

Our work with HTHS focused on the rehab of a greenhouse at Hoover YMCA Park. The project was part a new partnership between Hamilton Township High School, the YMCA of Central Ohio and The Mission Continues and was the culmination of several months of discussion and planning between the three organization.

Corey O’Brien, an Army veteran and high school science teacher at HTHS approached The Mission Continues over the summer with the idea of turning a greenhouse into a learning lab for his Environmental Science students. He was searching for a way to provide opportunities for his students learn an employable skill, earn some of their volunteer hours required for graduation and to connect with veterans.

I think the task for last Saturday went very well, and in my this was proven by the before and after pictures. Some of the other pictures show that even despite the cold, we all came together as a team, and had fun doing it.

As one of the first Purple Star Schools in the nation, HTHS has a major commitment to students and families connected to our nation’s military and is always looking for ways to connect with veterans. Over a cup of coffee Corey shared his vision with Ian Haynes, a City Impact Manager with The Mission Continues, and asked there might be a way to collaborate.

Hoover YMCA Park, which is about a half mile from the school, happened to have a greenhouse that had fallen into disuse. They offered it to the school on the condition that the school make any repairs needed to get it up and running.

A survey of the space revealed that the structure of the greenhouse was in great shape, but that there was a ton unused space inside and outside that could be tapped for gardening. With a bit of TLC, this would be the perfect space for the 25 students currently interested in urban farming to gain valuable hands on experience. And, with the potential for up to 90 students to be a part of the program, there was space to grow at the park.

This work is important to me as a veteran because like many veterans I still have a strong, intrinsic need to find meaning and purpose in my work. This is part of what attracted me to the military. This work allows me to feel like I am still doing good in the world and giving back to my community.

The Veterans Day project in Columbus was the first step in making this a reality. The project focused on returning the inside of the greenhouse to a clean slate, adding growing capacity inside and outside the greenhouse, purchase of an irrigation system and general grounds maintenance.

Finally, an irrigation system was purchased to be installed in the spring. The system, designed to run on a timer, was a major need since student will have limited time on site during the school year.

Outside the greenhouse, we built two garden boxes to go with the one garden box already in place. Further, we cleaned up the space around the greenhouse and added three cubic yards of mulch.

By the project’s end, the new HTHS Learning Lab at Hoover YMCA park totaled more than 550 sq ft of growing space, including 168 sq ft of new space in three new garden beds. Three cubic yards of mulch and two cubic yards of leaf compost had been added and the entire space was cleared out and prepped for growing in the spring!

“What was compelling about this particular service project, helping restore a greenhouse space for Hamilton Township High School, was that there was so much passion behind why the teacher of the school helped launch this partnership. The teacher spoke about using this space to help teach his students to be good people. As he mentioned, often times teachers only focus on academics because this can be easily measured. To hear a teacher talk about his obligation to also help teach students how to be good people by giving back to others was amazing. It was awesome to see a fellow veteran using other veterans to help teach his students about the importance of giving back.”

Here’s a lovely note from Corey O’Brien, who is a veteran and Environmental Science teacher at Hamilton Township High School:

There is no gift greater than that of your time. Freely giving your time to someone to work shows commitment, builds character, and is the American way. We help those in need. It makes me feel a positive energy to help someone, to do something good.

The project helps serve a greater purpose and is multifaceted:

There is a food insecurity on the south side of Columbus and Operation Southside Thrive helps us grow food specifically to help fight this battle. We are trying to help fulfill a need of those in our area.

I value the ability to contribute and feel meaningful, to make a difference, and promote selflessness through servitude. There were times in my life where I felt invisible, unnoticed, unimportant, and meaningless. They were dark days and they were hard to push through. I lost my focus, lost my fire, lost my way. I struggled with being normal, again. I was feeling isolated, alone, and separated. Being able to help someone else when they needed it is a motivating force. It gave me purpose.

Veterans help other veterans. If it helped me, it may help them, too.

Thanks to our supporters!

We had in kind support from Kurtz Bros Landscaping (donation of leaf compost), Polanko Consulting (speed bump to protect garden hose running across road). Additionally, Kirk Caudill from the Makery Company, a professional photographer, took the photos for us. Finally, we greatly benefited from the free tool rentals from Rebuilding Together Central Ohio.

Overall, we had a great Veterans Day service project with a new mission partner and, given the weather Saturday morning (20ish degrees and wind!), we had a pretty good turnout!