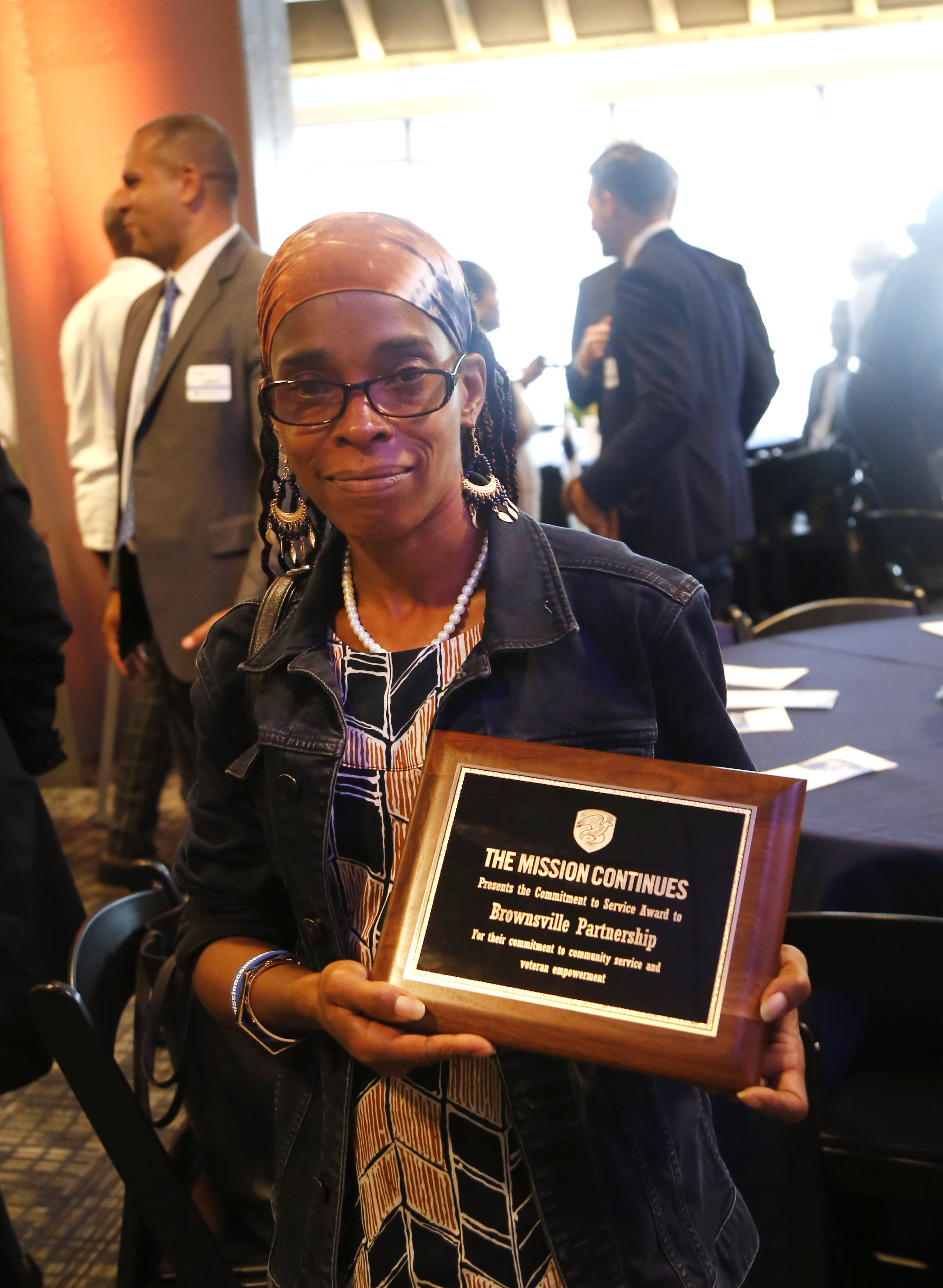 On September 18th we hosted our annual Commitment to Service Breakfast, a gathering of individuals who believe in supporting our work. This year’s event was held at the Intrepid Sea, Air & Space Museum in Manhattan.

Our president, Spencer Kympton and our Northeast Region executive director Mohan Sivaloganathan welcomed guests with opening remarks. We also heard from Joey Whimple about his transformative experience volunteering with The Mission Continues.

Loree Sutton, Commissioner at New York City Department of Veterans Services presented us with a Certificate of Recognition for our contributions to veterans in New York City. We also bestowed Community Solutions’ Brownsville Partnership with our Commitment to Service Award. Taurean Lewis, Specialist for Community Solutions and Brownsville resident, accepted the award.

Our keynote speaker was Chris Hayes, Host of MSNBC’s All In with Chris Hayes. His speech was so moving that we wanted to share it with you in full:

You know this is not an anniversary of September 11th that hits one of the five-year or ten-year marks, but it’s in some way as one of the most significant, as people have noted, that this is the first year in which someone who was not alive for September 11th can enlist in the longest war in the history of the Republic.

Which is a crazy thing to think about; the US has been through a lot. It’s been through a lot of war and conflict, it’s faced a lot of enemies. This is the longest that we’ve ever had in the country’s history, and there will be people shipping out to go fight in that war who were not alive on September 11th.

I’ve had occasion as a reporter to interview the father and son and mother and daughters who both served in the same war in Afghanistan—in fact, one of the security guards at the mass shooting in Las Vegas when I covered it—got a call from his son in Afghanistan, he had deployed there earlier. His son calling him to express his concern about what was going on in Las Vegas from the battlefield in Afghanistan.

And I think that the significance of that date has forced a lot of people to think hard about what has happened to the country and in the last 17 years it sort of it always. I think a kind of somber occasion for reflection on the health of American society in the wake of what happened.

And I think, as I think Spencer alluded to, it’s hard not to conclude that there’s something that feels very broken in American life in many ways. Not everywhere, not all the time. There’s all sorts of incredible things happening and there’s all sorts of flourishing, and it’s a huge country at 300 million people and you can never really generalize—but at some deep level, there’s a lot of ways in which the thing that, for lack of a better word, we might call “civil society,” feels pretty broken down.

And I think the way that it feels pretty broken down often stands in stark contrast to the feeling that people had in the wake of September 11th itself, which was of course shot through with tremendous amount of fear and anxiety and grief and heartbreak, but also this kind of solemn unity of purpose, right? The feeling of solidarity, of social solidity, of people being in something together, some unity of purpose was very profound. It was very visceral.

It’s a very strange thing that the worst attack in the country’s history and this horrible moment of grief, there are people when you talk to them and to recount the feeling about it, there’s a kind of sentiment there about a thing that they felt in the wake of that that they miss, in a weird way.

American society is diverse in all kinds of incredible ways, and it’s pluralistic, and it’s separated by huge expanses of geography, it’s separated by huge gulfs in socio-economic status and experiences of the law across racial divides, and all of that diversity is sort of beautiful and amazing and the thing that we’re constantly in a sort of struggle and dialogue with to produce the kind of best that that can bring about, and is also, at this point in time, 17 years since the September 11th attacks, feels like a country that does feel increasingly balkanized in many ways.

So there’s separation from fellow citizens—and this is documented in some of the data—we see people moving into, for instance, neighborhoods and counties that more politically aligned with them. (I have no beef with that, I live in Park Slope for the love of God, so you know I’m not judging anyone that does that, I myself have done that!) But we see a kind of separation in American life, increasingly, and what it is harder and harder to find are places where the common wheel is constructed and where the thing that we call civil society gets built.

And what we’ve replaced it with instead is things like social media, and all these sorts of ways in which we interact with each other through these kinds of abstract mediums.

One other huge divide in the country, which is what Spencer was talking about, is the divide between people that have served or have family members who have served in this longest conflict in the nation’s history, and those who don’t.

I have friends who have served but I don’t have family members who have and I have been one of the people in that 99 percent who has gone about life thinking about the Afghanistan war, or the war in Iraq, the Global War on Terror or the multiple missions that we’re currently serving as I speak in between seven and 10 countries depending on how you ask and how it’s counted. I think about those as items of concern in my public life, things I think about as a citizen but not a thing that when I go to bed at night, my loved one is in harm’s way.

And that remove is a really profound one. I think it’s an enabling remove that has produced, in some ways, many of the dysfunctions that we see in American policy, but also in civil society.

And so when you’re sort of viewing this through these different prisms of all the different ways in which American life, in the wake of what happened on September 11th, has grown so polarized and balkanized and divided.

I really genuinely believe that the most important work that can be done is repairing that. And there’s sort of good and bad ways to repair that, OK? There’s the kind of like “no labels” way to repair it, which is like hand-waving away a lot of the differences, there are sometimes people saying “we just need to talk to each other” as if we don’t talk to each other. We do talk to each other—we freaking shout at each other!

There’s this idea that the way to repair what’s broken in American civil society is discourse. People talk about this all the time like, “the discourse.” People get mad about someone getting disinvited from a college campus or how we’re not talking to each other. And I am actually weirdly enough (as a person who speaks for a living), I am not that enthusiastic about speech as a means of repairing what’s broken in American civil society.

I don’t think that’s the way speech works. I think speech is amazing and wonderful and part of how we engage in debate, but I think I’ve learned from watching my parents growing up in the Bronx—my father a community organizer, my mother working in the Education Department—the thing that repairs civil society is DOING and not TALKING.

But civil society actually gets constructed through collective action and collective action is action, is DOING. The most important thing that we’re lacking in America right now, as a means of repairing what is broken in civil society, is not platforms with which to talk to each other. It is not communication and it is not conversation. It is not a better discourse. That’s all there! Everybody in this room can talk to everybody they know, at an instant, at any time.

What we don’t have are opportunities to do things together.

There are preciously few opportunities to do that, and it is what makes I think the work The Mission Continues does so particular and so inspiring and so important, specifically.

Yes, serving veterans and having veterans serve is important and bridging the civilian-military divide is important. And yes the actual objects of the service in these communities is important. But I actually think the work itself, the doing, the activity is the kind of soul of the thing.

And it’s the doing and the activity and the struggling together and doing things together as fellow citizens that are invested in a collective project together by virtue of the fact that we inhabit the same democratic polity—that activity, that is what makes what The Mission Continues special and rare and, to me, unbelievably crucial in this particular moment when things feel so broken and so fractured that things might snap at any second.

We don’t have opportunities to do the kinds of things The Mission Continues convenes us to do together to have the kinds of conversations to have the collective joy the sense of accomplishment. And as I think […] there is something that gets at the sort of spirit or soul of what it means to be part of a collective democracy in the work that The Mission Continues does every day.

There’s tons of service organizations. There are obviously tons of veteran organizations, there are tons of people who do incredible work. There are lots of nonprofits that I and my wife support for various reasons. But the particular work that The Mission Continues does and the particular thing that they are attempting to repair that is broken in American civil society is not replaceable by anyone else.

And that’s why it’s really important for you to support The Mission Continues. Because in their absence there is no one filling that vacuum. It is the most under-resourced part of our collective civic life that they are attempting to attend to.

I really really really hope you can continue your support or increase it. I’m just going to give a hard sell. It’s easier for me. Because this is really a vital vital part of our civic fabric at this point.

Chris Hayes hosts “All In with Chris Hayes” at 8 p.m. ET Monday through Friday on MSNBC. Hayes is also editor-at-large of The Nation.