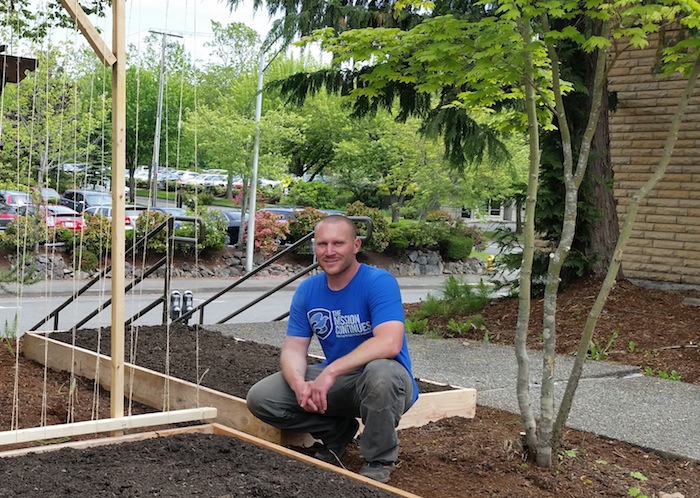 Built from the Ground Up

It’s a difficult thing to leave an Army career after 14 years, with a difficult tour to Afghanistan as an endnote.

We lost a lot of great people early on. That much time away from family led to my decision to pack it in and transition out of the military. But nothing could prepare me for the road ahead.

So I left school and posted up on the couch, the months passing by without much notice. The highlight of my day was lying balled and crying up in the bathtub. Some days I’d stare at a loaded pistol on the coffee table and wonder what the metal would feel like in my mouth.

It took a year of living like this to realize I had to make a change.

I applied for countless apprenticeships in Washington State and landed a job in construction. I had a temporary sense of relief from the misery of standing still. I was hopeful I would find my sense of purpose and community in construction. A project at the University of Washington kept me busy for a year and landed an additional position in what seemed like a dream job working with incarcerated youth.

Mark Oravsky during his fellowship.

It wasn’t long before the dark corners of isolation and detachment crept back into life. After five years clean and sober, I relapsed. Once again, I was alone and feeling the gravity of mortality without purpose, without direction and without community. I took a trip to Sacramento to dry out—and made it back to Washington alive.

At two months clean and sober, I can still remember the time of 3:45 AM. I was up and googling “veteran” “non-profit.” Eventually I landed on The Mission Continues.

Their mission statement took hold like a vise. Life at home, new missions, action and service. The message around finding purpose and transition around community service struck something deep. I applied for a fellowship and began exploring nonprofits in Thurston County to host me as a Fellow.

I landed at GRuB, which inspires positive personal and community change by bringing people together around food and agriculture. I called them to discuss opportunities there. In the three years of stormy transition, it was the first time I felt valued, and realized this could be the beginning of a new chapter in my life.

The multi-cultural motto of “everyone welcome at the table” is not simple words on paper for this program. GRuB not only seeks to serve low income families and at risk youth, it empowers each individual to contribute their distinct skills and attributes to effect positive change in the lives of others.

Over the course of fellowship, I have had the opportunity to connect with other members of our community who have experienced a great deal of heartache, depression, anxiety and life challenges. On a build in cattle country, we met a woman who is a survivor of domestic violence, the single mother of an educationally disabled child and who had lost her mother last year. As we stood admiring the new gardens we helped her put in, we exchanged warm hugs, tears and she expressed her appreciation for the start of a new chapter in her life.

Another gardener we built with shared her story. Last year she and her housemates were living in a homeless shelter. She secured a home with three other women through one of our programs. The GRuB gardens we built together serve as the foundation for her feeling of well-being and stability in her new home.

Over the course of several builds, I got to know several of these folks. Many of them have experienced the same type of challenges in reintegration I have. One veteran in particular was rather shy and reserved.

On one particular build, he shared heartfelt feelings of gratitude and appreciation for providing him the opportunity to get out of the house and into the community. This build was the third he had been on and the third time in over two years he was able to leave his home without his wife or service animal.

There’s something about service that we both have learned. It doesn’t simply get you outside and active. It fulfills the deeper need to be significant and needed in someone else’s life, just like the Army once did. Now that I’m home, that commitment will never end.

Mark Oravsky is an Army veteran, a Bravo 2014 Fellow alum and a member of the South Sound Service Platoon.

Want to serve in your community like Mark? Apply for a fellowship.