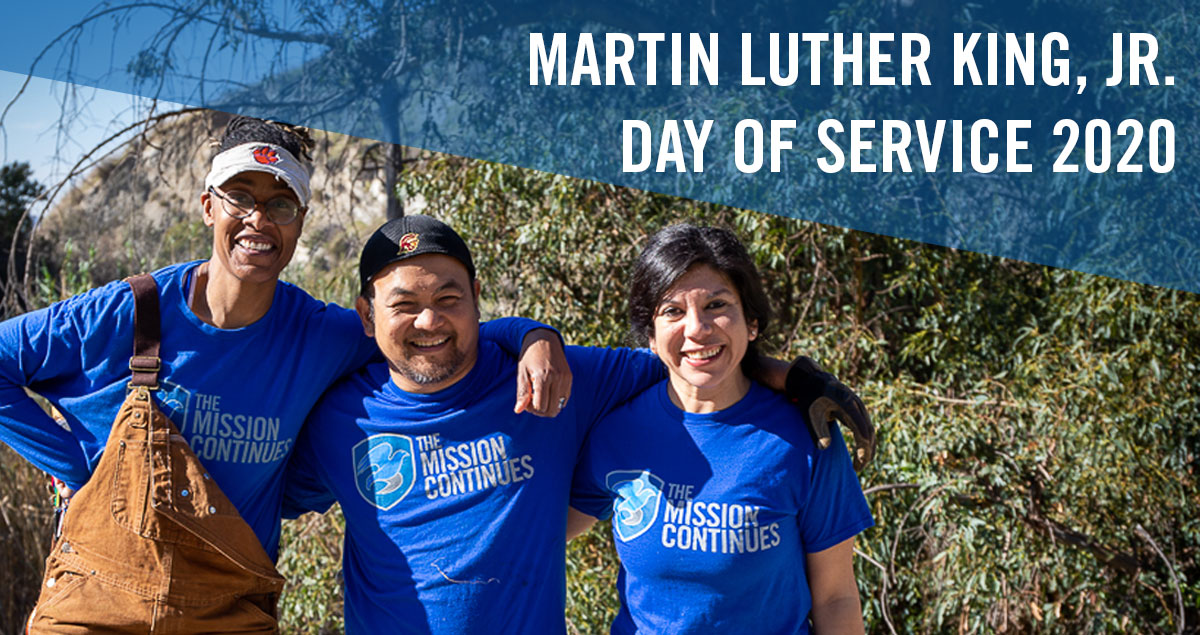 The Martin Luther King Jr. National Day of Service is a day we salute those who fought and continue to fight for equality and justice, both in and out of uniform. We proudly recognize that our country is shaped and improved by the activism of its citizens, looking to the Civil Rights Movement as an example of Americans working to create a brighter future for our nation. We continue to serve because there is still work to be done, and veterans are uniquely suited to affect positive change.

We led the charge and partnered with local organizations, schools, and community centers to continue Dr. King’s #LegacyofService. During the month of January, our veteran-led service platoons organized service events across the country that exemplified the values Dr. King championed during the civil rights movement and honored his legacy.

Additionally, we recognize that community service is just one way to leave a legacy. At The Mission Continues, we proudly support efforts to take an active role in civic engagement – whether it be through attending meetings of local government, making your voice heard by contacting legislators, or heading to the ballot box to cast your vote. United States Service Members have fought and died in order to preserve our right to vote, and to honor that legacy, The Mission Continues will also pledge to register voters during the month of January through nonpartisan registration drives at our service projects to ensure that the voice of the veteran is heard within our government. 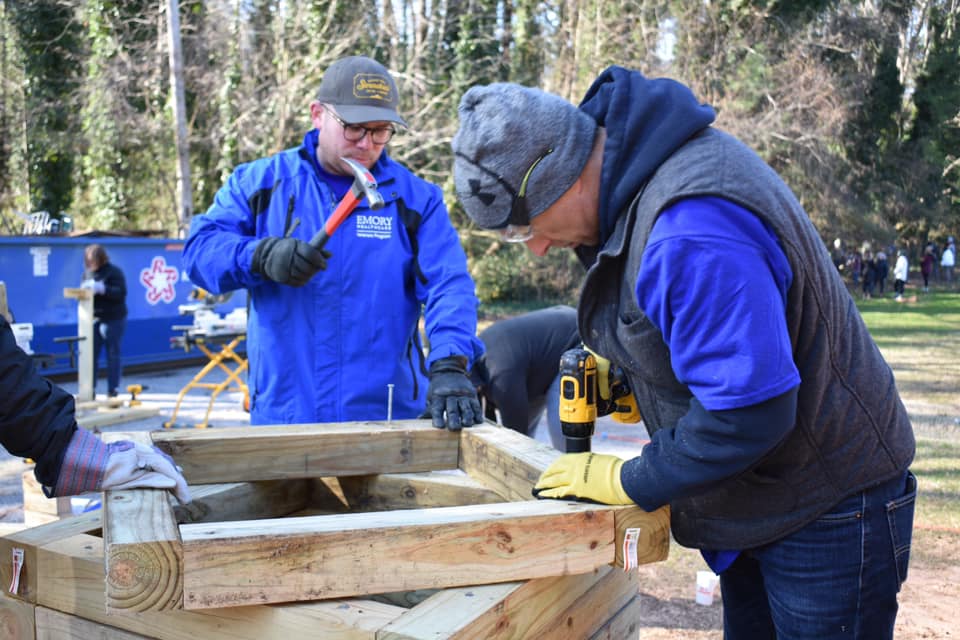 Our Atlanta 3rd Service Platoon’s Operation South Atlanta focuses on youth development, education, and fostering strong community organizations in the Atlanta’s southside, a neighborhood which residents feel is consistently overlooked. After accomplishing objectives with The Future Foundation over the last three years, the platoon worked with the foundation to partner with Fulton Leadership Academy for the first time in September 2019. The academy is Georgia’s first all-boys public charter school with the mission of educating young men to be civic leaders. The Mission Continues and Fulton Leadership Academy used the Martin Luther King Jr. National Day Of Service as an opportunity to build our legacy of service through our second service project at the school. 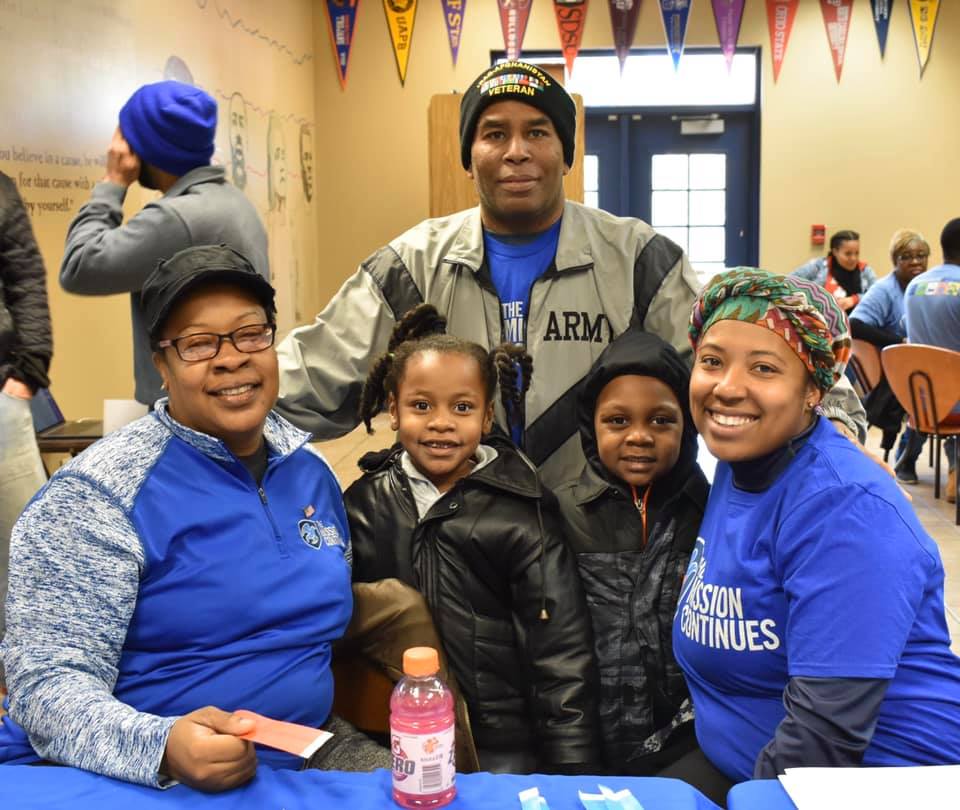 We gathered with Fulton Leadership Academy with 178 veterans + volunteers and  set out to update the outdoor spaces at the school, as well as to refresh the interior of the school to create a brighter and more welcoming learning environment for the students. Over the course of the day our team:

We joined the military because we wanted to give something back to our country, and now that we’re not in the military anymore we still want to give back to the neighborhoods we live in. I wouldn’t say the school needs our help – I think the school deserves our help, they’re doing great things in the community themselves and they’re showing that they are the future.Kimia Flournoy

Kimia is a US Marine Corps veteran, serving nearly five years on Active Duty as a Field Radio Operator. She is an active part of the Mission Continues community and has participated in several programs including Operation Westside Surge, Women Veterans Leadership Summit, and others. Kimia currently serves as the Platoon Leader for Atlanta 3rd Service Platoon, a position she has held since 2018. In addition, she maintains a leadership role within The Mission Continues by mentoring other veterans in Atlanta and across the country.

Thank you to local CarMax and Starbucks locations for reporting for duty with us and serving Fulton Leadership Academy! 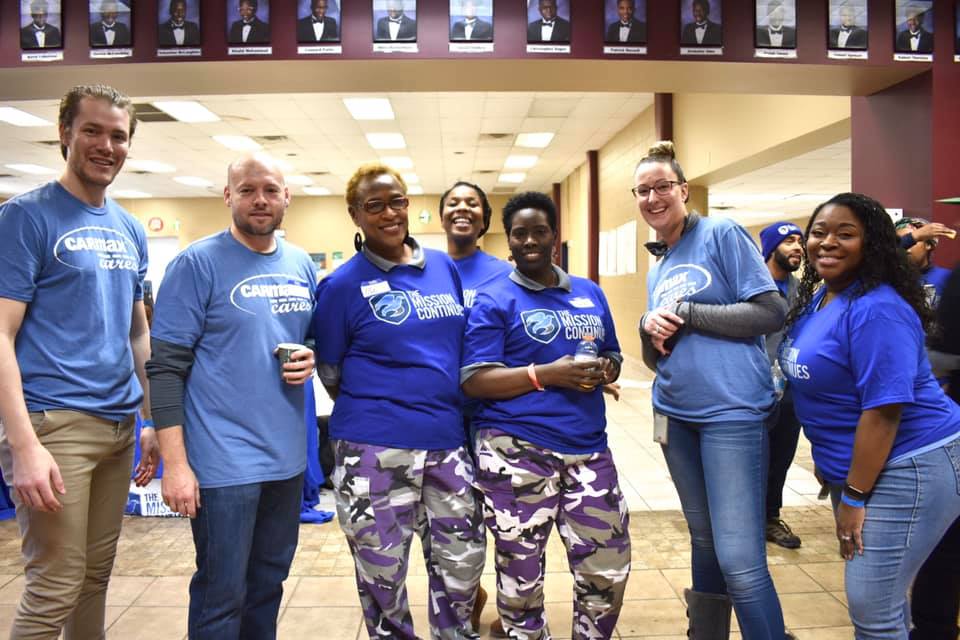 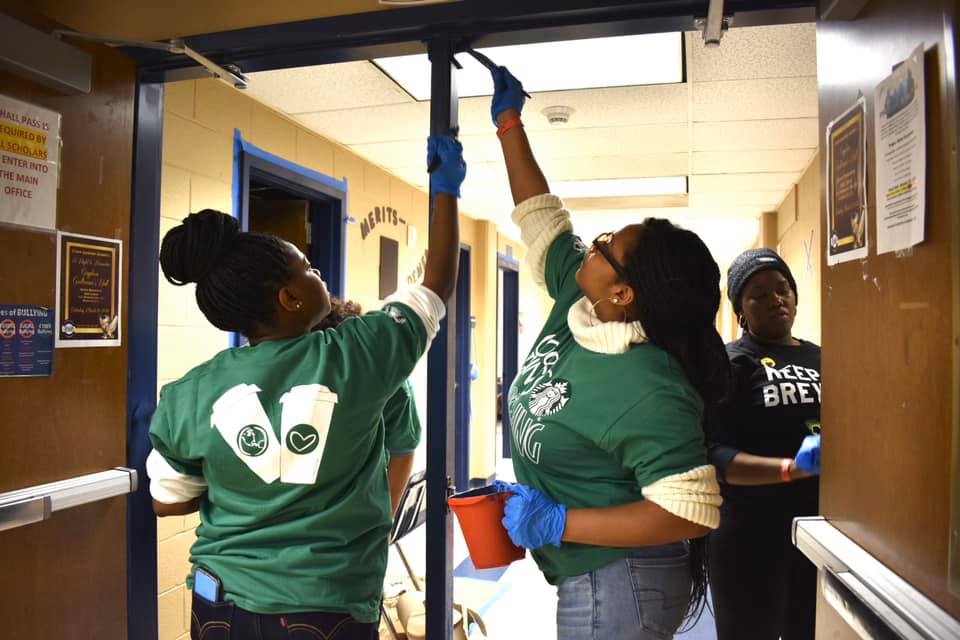 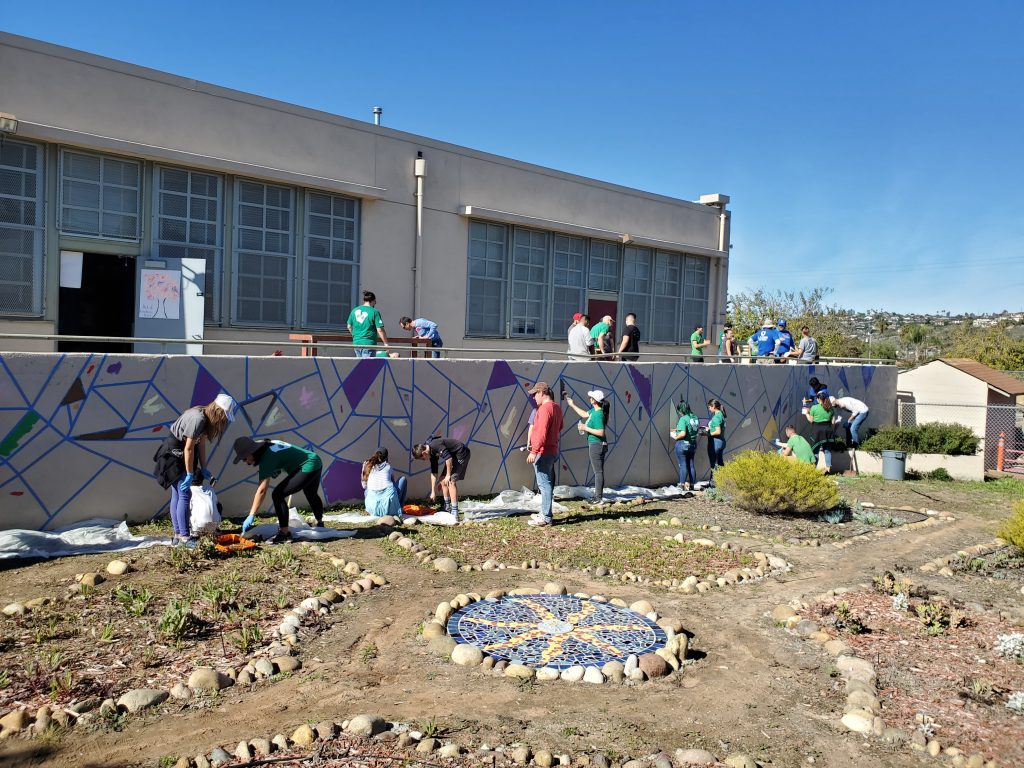 The San Diego 2nd Service Platoon launched Operation Mid City in 2017 with the goal of enriching the lives of youth living in City Heights, a diverse urban area just east of downtown San Diego. The platoon has partnered with the San Diego Unified School District and other area schools to complete various improvements and projects over the years that create safe and inviting environments for students to thrive. To honor Martin Luther King Jr. through service, the San Diego platoon joined forces with Harriet Tubman Village Charter School, a public charter school in the San Diego Unified School District. The school’s mission is to build a sound mind, sound body, and sound future for its students. 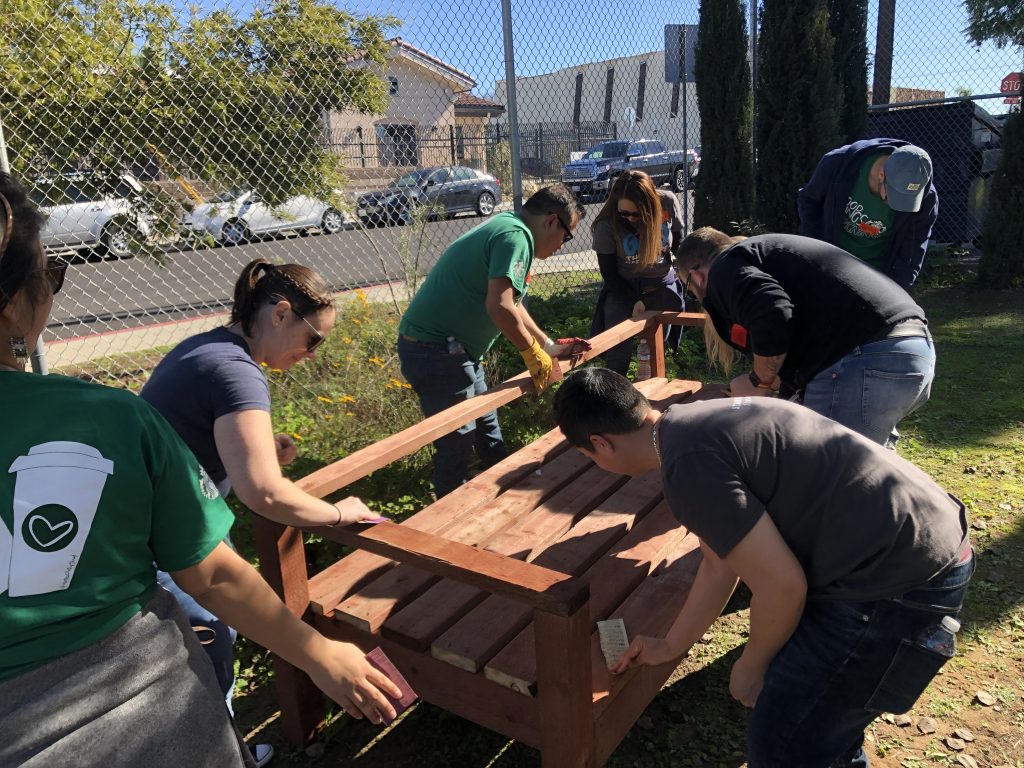 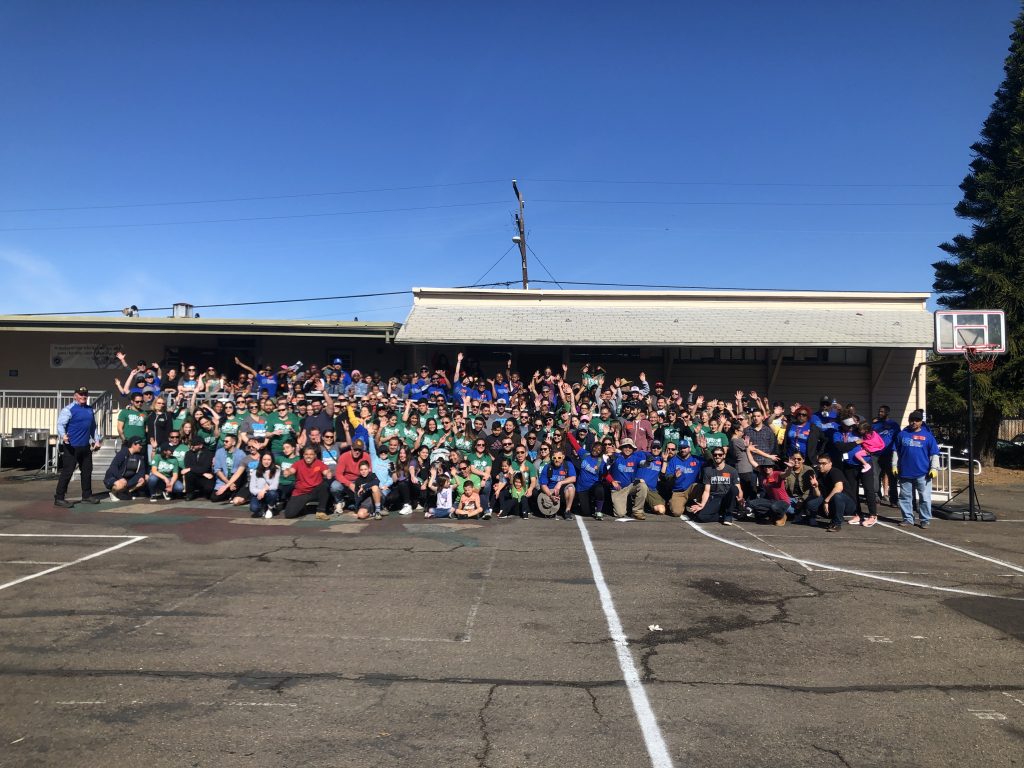 Our team of 154 veterans + volunteers devoted the day to creating outdoor learning environments for the school and refreshing the interior of the facility through art. At the completion of the service project, our team:

What Dr. Martin Luther King Jr. did for civil rights, for his country, and for the world is incredible. I can honor, remember,  and humbly emulate his legacy and service through the volunteer work our Service Platoon does, which hopefully will show the students, staff, and community that others care about their academic success and welfare.Mike Plue

Mike Plue is a former Marine Corps Infantry Officer who served in the first Gulf War. He has been volunteering with The Mission Continues for four years, serving as the San Diego 2nd Platoon Leader since 2018. In addition to volunteering with The Mission Continues, Mike also volunteers with The Travis Manion Foundation and VetCTAP, as well as working full-time as a director for SAP Ariba. Mike’s wife Laura served in the Navy and together they have three boys.

Thank You To Our Mission Partners!

Our Mission Partners are a group of funders who support our mission year-round. They empower our veterans to reach new heights both personally and professionally, and help us make long-lasting, positive impact in communities nationwide. 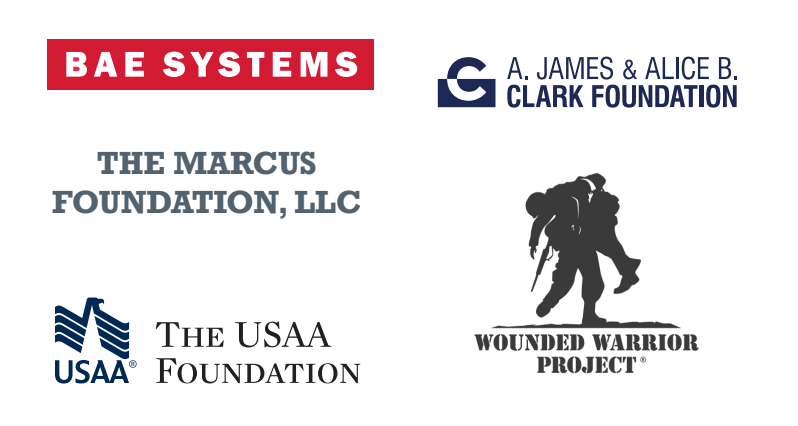