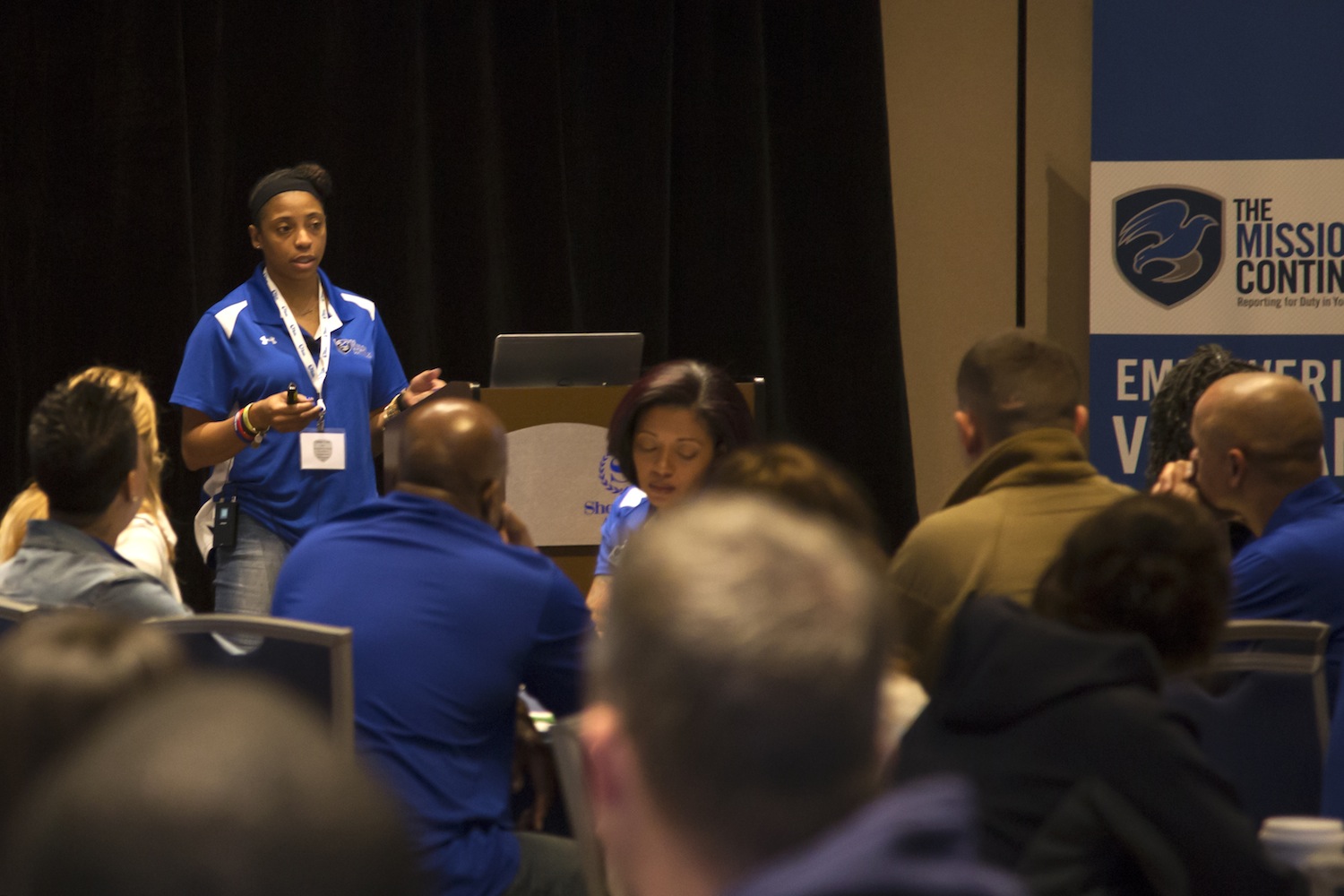 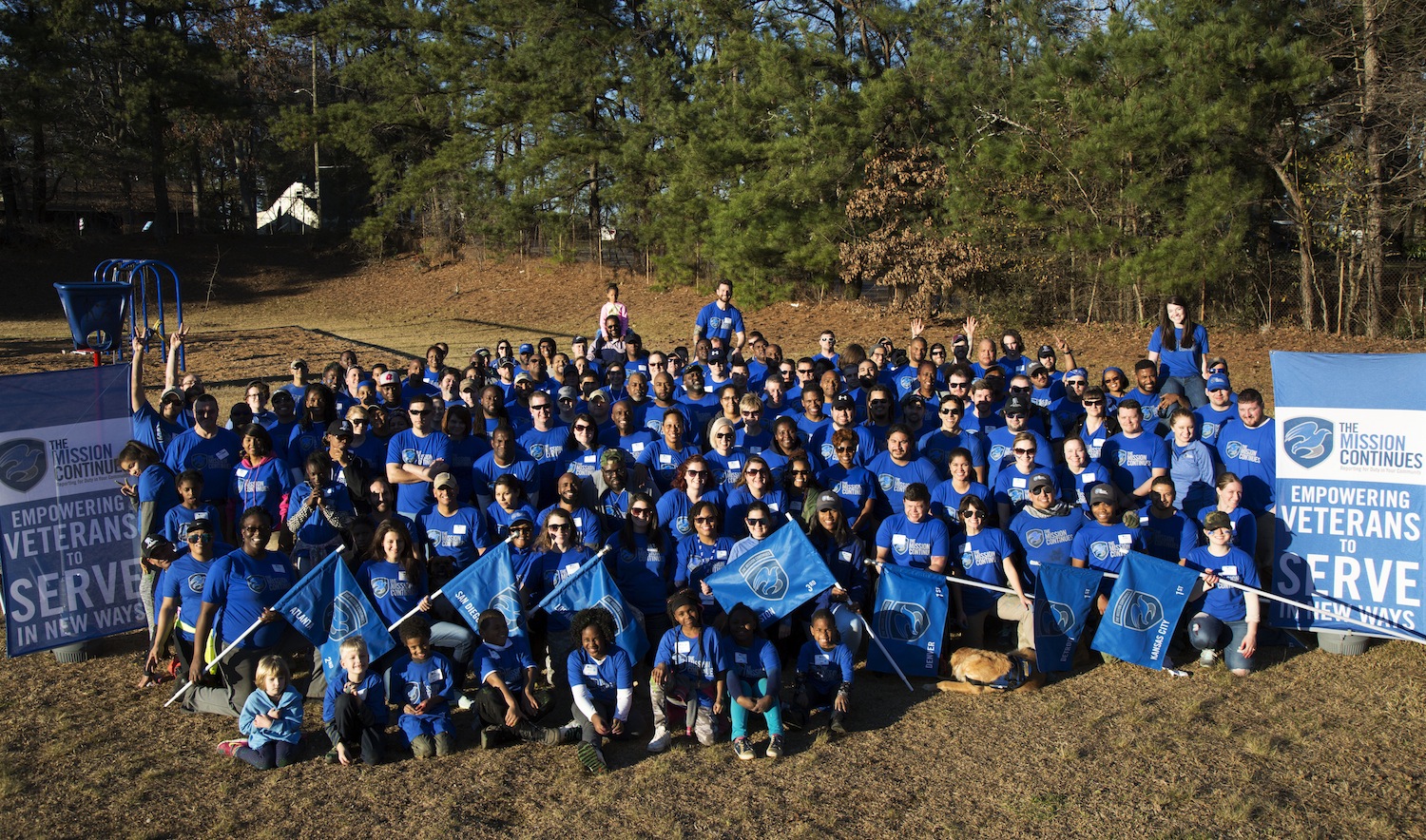 Alpha Class and volunteers at their service project on Saturday, January 30th.

The Mission Continues welcomed the newest class of Fellows and Service Platoon Leaders to the team with a three-day orientation in Atlanta from January 29 to 31. Orientations are an intense three days of learning, networking and service ensuring Fellows and Service Platoon Leaders are equipped with the resources they need to make an impact in their community.

For the Fellows, they report back to nonprofit and community organizations across the country following orientation weekend to serve part-time for the next six months. Fellows also work one-on-one with a Mission Continues team member on a series of personal and professional development exercises. The Service Platoon Leaders return home to take command of a team of volunteers, addressing challenges in their community ranging from homelessness to childhood obesity.

Each Fellow and Service Platoon Leader is a veteran of the United States Military and bring more than 900 years of combined military service to their communities. They also mirror the demographic splits of previous classes. Women comprise one-third of the new Fellows and Service Platoon Leaders, outpacing the ratio of men-to-women in the military (see #HerMission for more information). Among Fellows, more than half are veterans of the United States Army, followed by the Marine Corps (18), Air Force (10) and Navy (3). 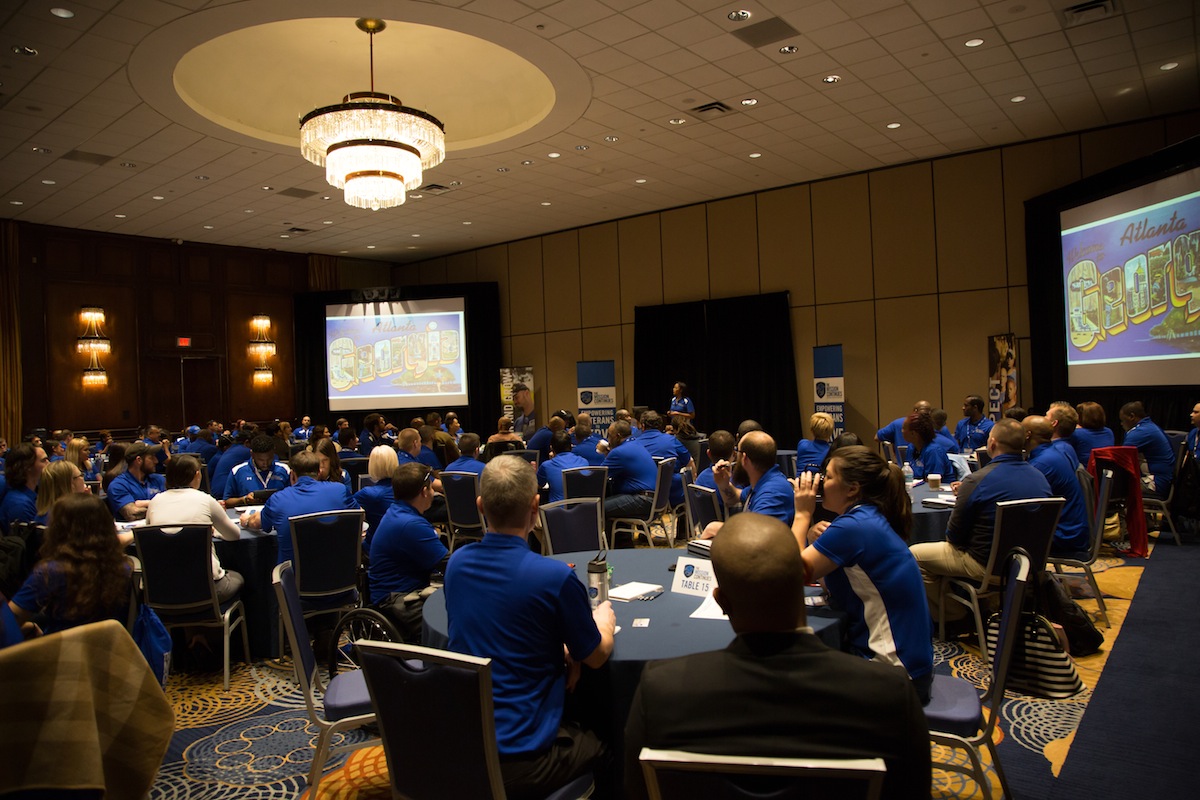 The weekend was staggered around a series of trainings focused on the fellowship and service platoon programs. In one session, Fellows met and networked with others in their region. In another, Service Platoon Leaders discussed the essentials of running a successful service project.

Among the speakers addressing Alpha Class was Navy veteran Tonya Cook. Tonya served her fellowship at the Women’s Center of Jacksonville as a member of Charlie Class 2015, and left her audience of Fellows and Service Platoon Leaders with a few pieces of advice:

“Don’t close your mind to open possibilities. Remain flexible and positive. Most of all don’t forget to be a role model, because you never know who might be watching and looking up to you.”

But the weekend wasn’t all about PowerPoints and curriculum briefs. There was hard work to be done and a school to be served. On Saturday, Alpha Class deployed to T.J. Perkerson Elementary. Located in southwest Atlanta, the school voiced a need for help in building new outdoor learning areas, repainting structures, and creating a nature trail. Fellows and Service Platoon Leaders divided into a small teams and spent and the next four hours at work.

This wasn’t a solo effort however. Students and their parents were also in attendance and pitched in to the effort. For a group of veterans who have achieved so much already, it may be convenient to assume that the hard work is done. Instead, Alpha Class 2016 took a new oath in Atlanta to inspire future generations to serve. They took a big first step toward this goal in Atlanta: 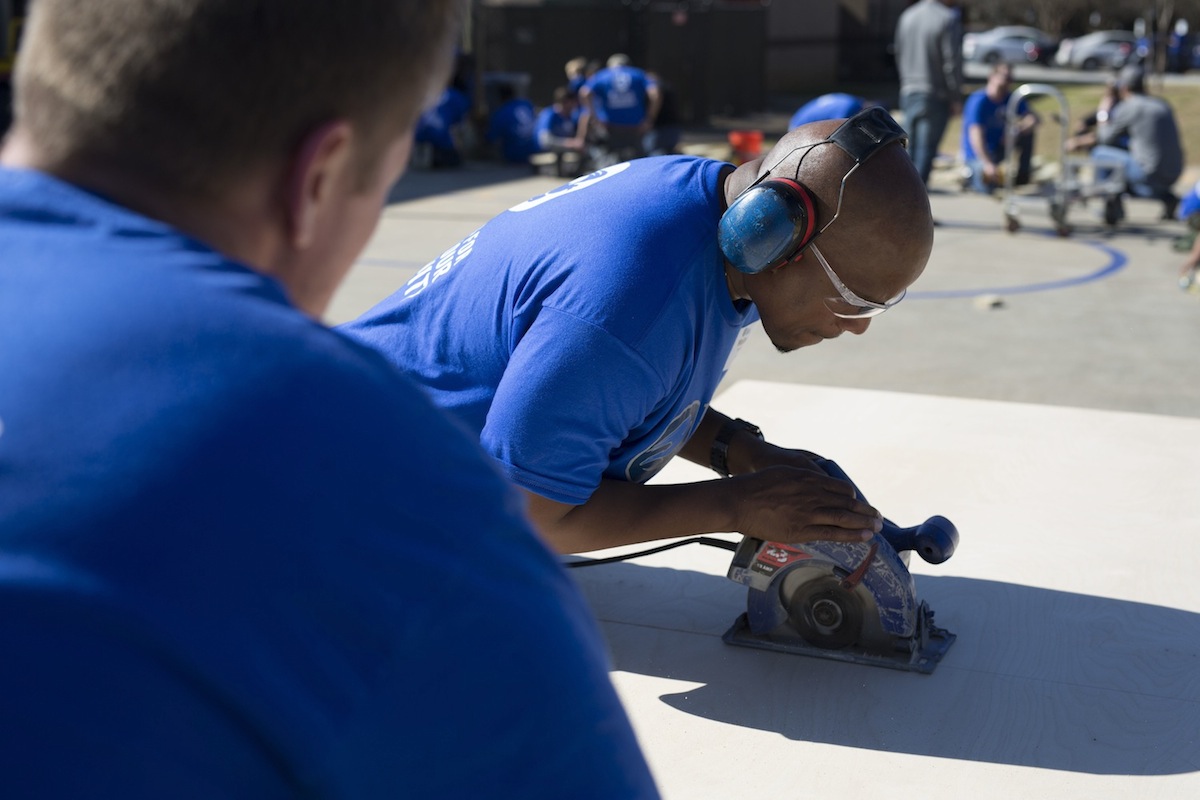 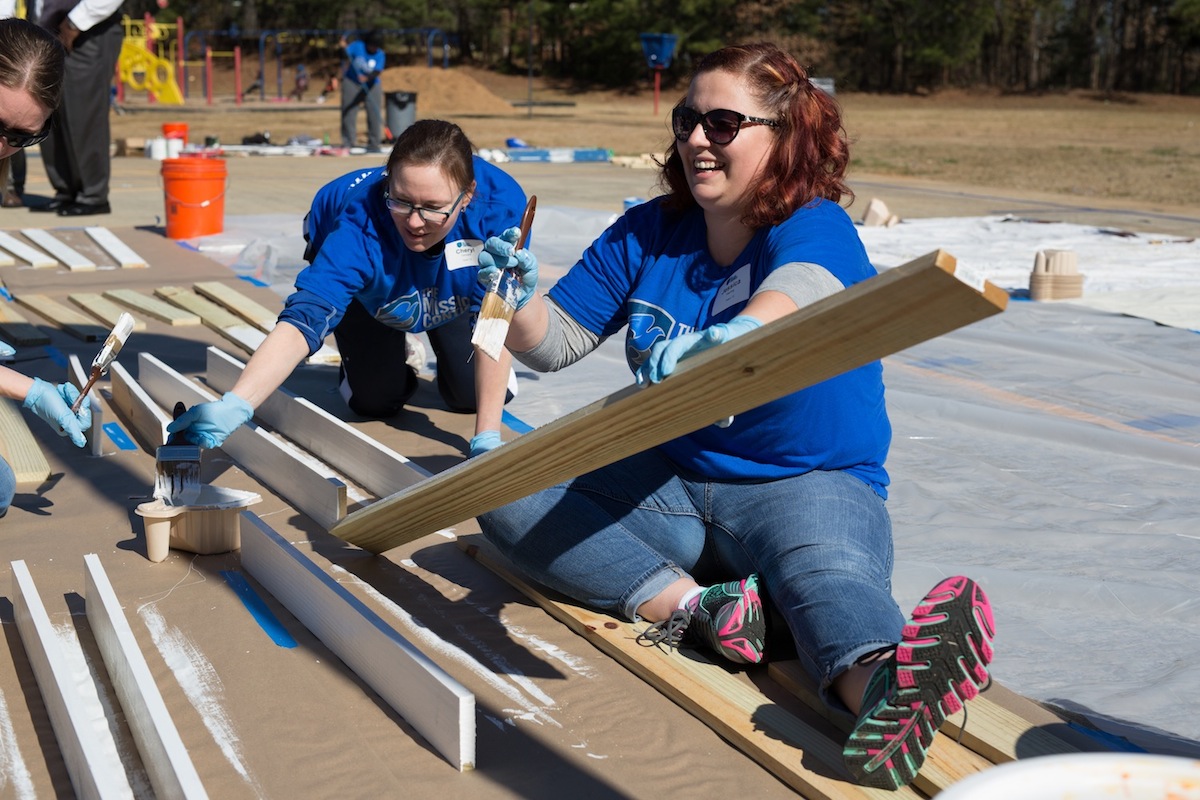 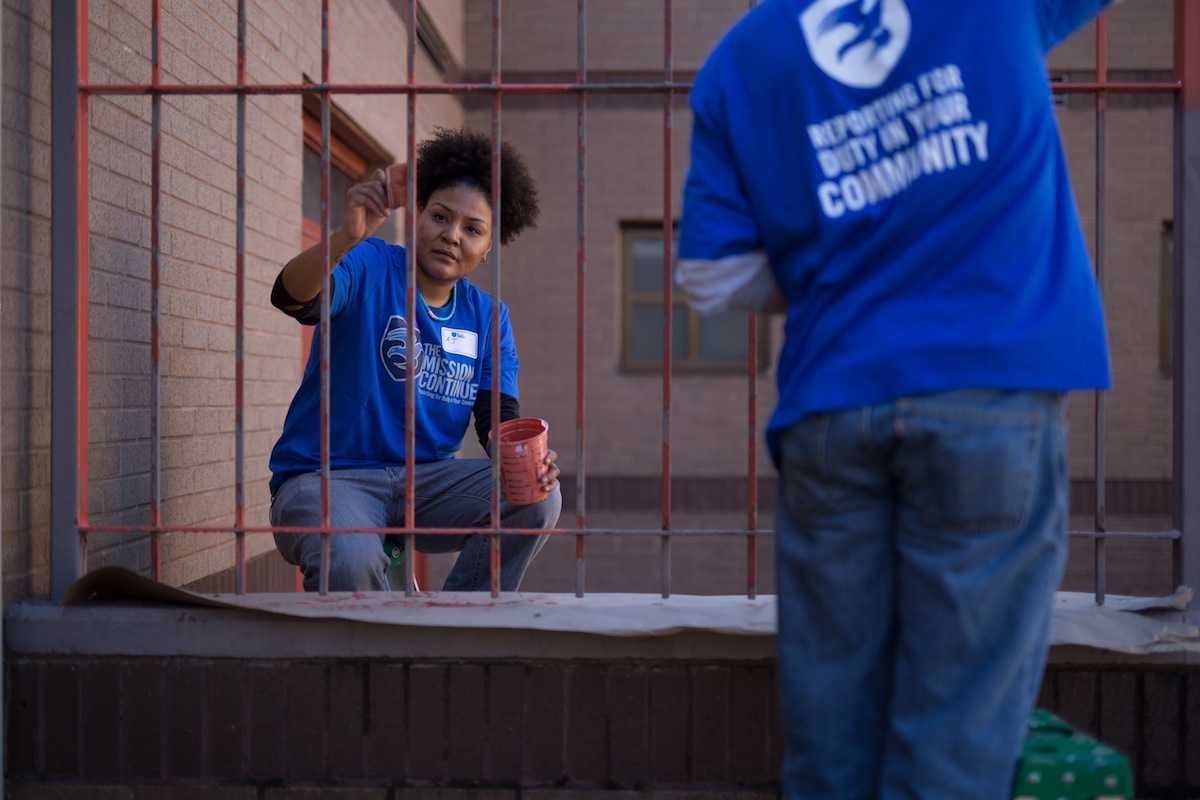 And for some, inspiration is a gift that outlasts even our own lives. The weekend closed out following the presentation of The Mark Weber Legacy Award, created in 2013 in honor of  Lt. Col. Mark Weber, a Fellow Alum and guest speaker at multiple orientations. Mark’s military career was cut short after he was diagnosed with stage IV cancer. Still eager to serve, he became an outspoken advocate of resiliency. The award is given to one member of each fellowship class who exemplifies of Mark’s legacy of service. The recipient from Charlie Class 2015, Aroch Bolanos, was on-hand in Atlanta to receive the award.

Aroch served his fellowship with the Bergen County Division of Veteran Services in New Jersey. Aroch worked one-on-one with veterans over the course of his fellowship helping them access healthcare resources, attain employment and find sustainable housing. 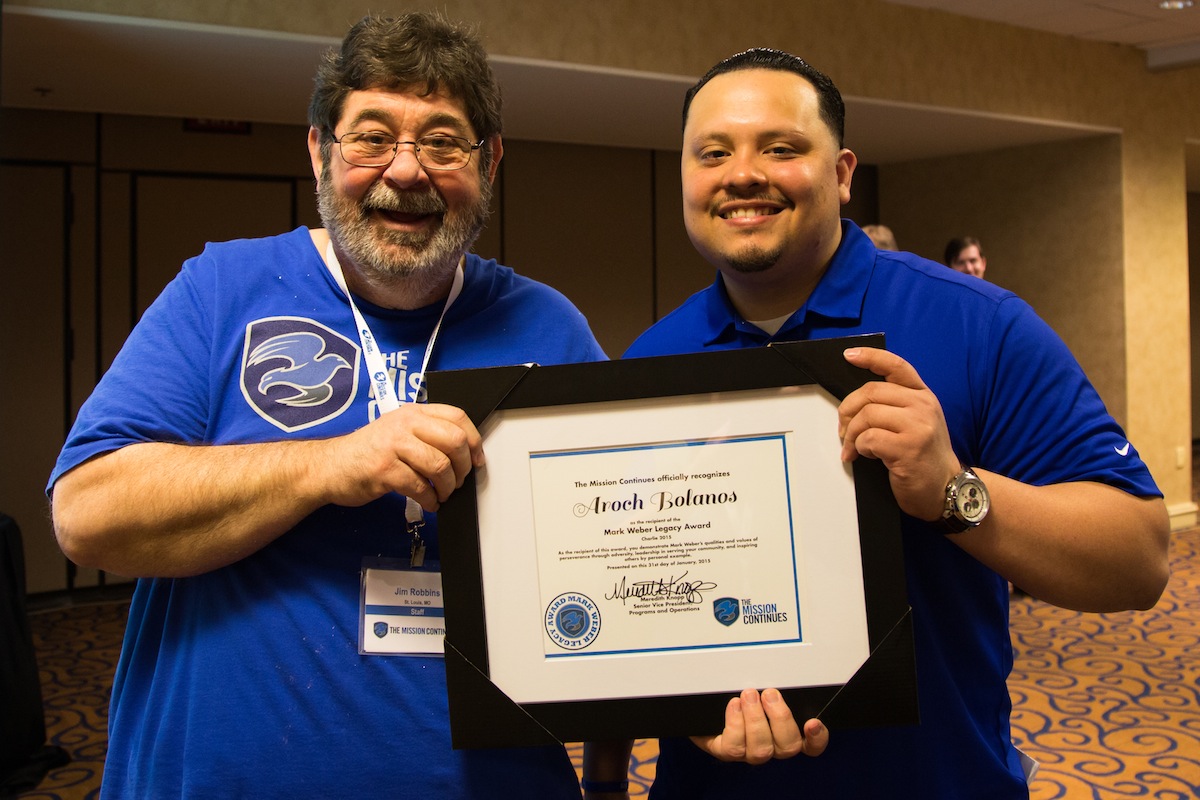 The next class of Mission Continues Fellows and Service Platoon Leaders will convene for their orientation this April in Seattle. The deadline to apply for this class has passed, but the window to apply for Charlie Class 2016 is now open. Visit our website for more information.