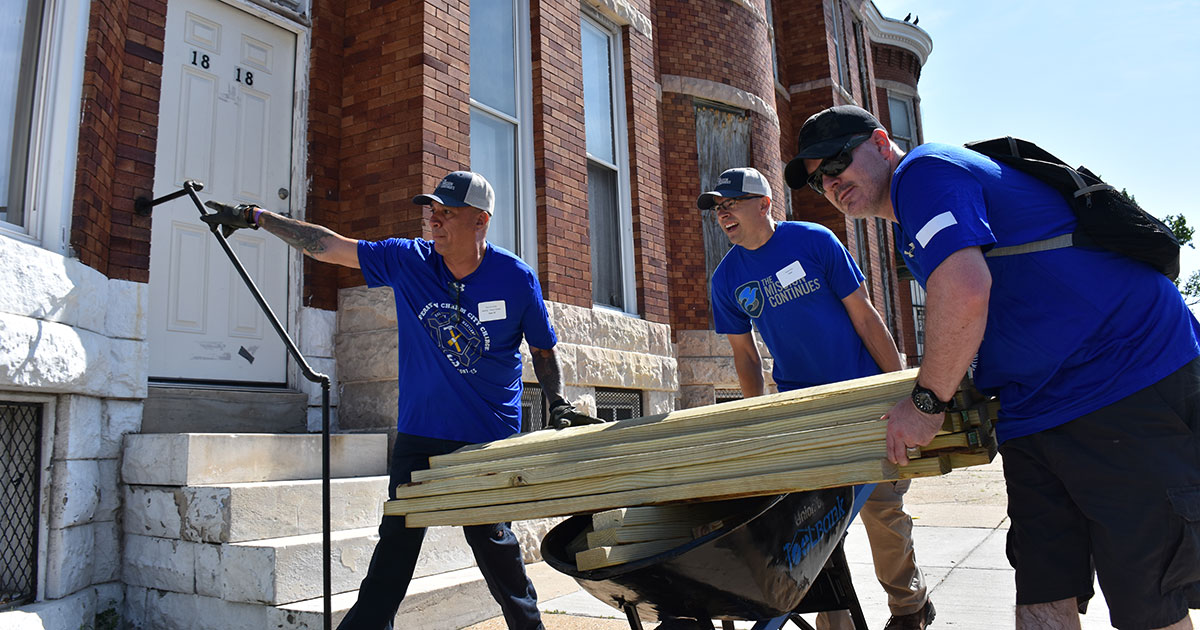 Harlem Park West is a neighborhood full of potential, and actively taking steps towards community-led development and revitalization. Historic 3-story row homes line the streets ready for repair, and empty green space awaits gardens to be planted and harvested for local use.

The community has a strong history of local activism, while also struggling with social issues such as poverty, violence, and unemployment. Once considered a thriving home to mixed-income families, today many residents are faced with urban blight and a lack of critical resources.

In 2015, a group of dedicated residents stepped up to lead from within; creating the Harlem Park West (HPW) Community Association to help unify and restore the neighborhood.

A long-term partner of The Mission Continues, HPW Community Association is helping to steer the community towards positive change as part of a greater ongoing movement throughout the city to fight for a better, thriving Baltimore.

This project was a continuation of this four-year partnership with the Harlem Park West (HPW) Community Association. To date, our local service platoons have helped to transform green spaces, spruce up blighted buildings, and supported the learning efforts of local public school children throughout the community.

In their efforts to revitalize the neighborhood, HPW Community Association is working to mobilize and inspire residents into action. Our service is not only an opportunity to impact and empower the community but also an outpouring of support for residents working day-to-day for positive change.

Spencer Kympton, president of The Mission Continues, greeted the veterans on their first day of Mass Deployment. “We all share a few beliefs: the belief that what you’re gonna do today, this week, and back in your community, is going to make a real difference. The belief that his neighborhood can achieve what it wants to achieve–and the belief that we can come together, be a united front, that when we pick up this tool we’re showing that we’re all in this together.”

Community leader Antoinette Mugar, who is the vice-president of the Harlem Park West Community Association, also spoke. She said, “You don’t know what this means to a community who has lost hope, who thinks no one cares about them. You bring life back into this community.”

Lockheed Martin was our daily sponsor, and employees showed up to help with the volunteer effort. Big shoutout to them for enduring a full day out in the hot sun alongside our veterans!

Craig Cash of Lockheed Martin spoke to our volunteers to kick off the program. In addressing this crowd of mission-driven veterans, he said, “Our motto is ‘your mission is ours’ — and today that is truer than ever.”

Things we did:
– Madeover vacant lots with art installations, murals, and landscaping to prevent illegal dumping
– Created a park complete with gathering areas and games for local seniors to enjoy
– Provided a facelift for the former Roots and Branches School with exterior painting and fence repair

Farring Baybrook Park sits between the Brooklyn and Curtis Bay neighborhoods in South Baltimore and is one of the largest green spaces in the city. Named after Brooklyn community activist Maree Farring, the park has a long history including as a former home to WWII barracks for wartime workers.

Covering over 100 acres, areas of the park remain underutilized and under-maintained despite recent community efforts, resulting in trash build-up.

As a bridge between neighborhoods, the park has been a shared space for local residents and has the potential to provide greater connection to local facilities for residents. An ecologically important, but isolated-feeling connection point is through a wooded stream corridor that links recreational buildings, educational buildings, and housing.

Although residents use the poorly marked and overgrown path, it is a site for dumping and other illegal activity. The “short-cut” poses safety concerns for students.

With support from the Baltimore City Department of City Planning/ INSPIRE program, Baltimore City Recreation and Parks, the Greater Baybrook Alliance, and local parents and residents, we will remove barriers and create safe pathways for hundreds of students traveling between the Curtis Bay neighborhood, the new Bay-Brook Elementary/Middle School, and recreation facilities.

Jen Leonard from the INSPIRE program started our day by saying, “Kids are walking this path but nobody feels safe, nobody feels like they should be walking it. Today, we’re creating a welcoming connection between Brooklyn and Curtis Bay.” She also joined us for the full day of volunteering, and we really appreciated the extra pair of hands!

Things we did:
– Cleaned up the site with extensive overgrowth and trash removal for safe passage
– Filled in the walkway and repaired benches to create a marked and enjoyable walk to school
– Landscaped and painted murals to beautify and brighten up the path

The only high school in the Brooklyn and Curtis Bay neighborhoods, Ben Franklin High School provides not only education but critical support services to its 500 plus students and the broader community. Despite strides towards increased enrollment and graduation rates, youth engagement during and after school hours is an ongoing struggle.

As a Community School, Ben Franklin has partnered with local businesses and local organizations in support of its students, families and the community.

Located within the school is The United Way Ben Center, which provides students with additional wraparound programs such as an early childhood development program for teen parents, mental health supports, and an eviction prevention program. The Ben Center also provides meeting space and resources for the entire surrounding community, not just students.

Principal Christopher Battaglia greeted the crowd of veterans, saying, “You’re going to do some great things that will provide our kids and our families with hope. You took time to let our kids know that you care.”

Thanks to our Legacy Sponsor Under Armour for their support and for providing our special OC3 shirts, keeping our volunteers feeling and looking cool all week!

We also had a surprise visit from Aaron Maybin, former NFL linebacker and Baltimore native. He said, “We all know it takes a village, and today is an example of what that village can look like when people care.”

Things we did:
– Overhauled courtyard garden into an eco-friendly habitat with a new greenhouse, compost bin and garden beds for fresh fruits and veggies
– Created an outdoor classroom complete with seating and shade structures to accommodate alternative learning
– Beautified the campus with large-scale murals and landscaping to improve the overall appearance for students

One of the few urban green spaces in the Brooklyn neighborhood, Garrett Park has been recognized by community members as a space in need of revitalization.

Largely underutilized, the park has the potential to offer a positive outdoor environment for families, sports teams, adult recreation, and community events.

Located within the park is the Brooklyn O’Malley Boys & Girls Club, serving up to 100 local youth on a daily basis. The park plays an important ecological role as well, as it abuts the Patapsco River, providing a natural habitat for local wildlife along with stormwater retention that helps to prevent flooding.

Organizations including the Greater Baybrook Alliance, Friends of Garrett Park, and Boys & Girls Club of Metro Baltimore have mobilized to invest and enhance these two community resources.

While a capital plan is in place to infuse professional contracting resources into the park, our day of service supported the city’s proposed renovations, setting the stage for years of development and growth. We also enhanced the facilities at the Brooklyn O’Malley Boys and Girls Club to better utilize the building and outdoor youth engagement spaces.

Kicking off the day’s project was Troy Flaherty from CarMax, our Daily Sponsor. Offering appreciation, he said, “Thank you for serving our country and your community!”

City of Refuge Baltimore (CoR) is dedicated to local individuals and families seeking a pathway out of poverty. Located in the middle of Brooklyn and Curtis Bay, the organization focuses on their five impact areas: the essentials (daily needs), housing, human trafficking, workforce development, and youth empowerment.

With the surrounding community bombarded by issues including high rates of unemployment, rising violent crime, and nearly half of residents living below the poverty level, the community is struggling to rise above these day-to-day obstacles.

As an organization on a mission to “lead individuals and families on a journey to self-sufficiency,” this project was fully in line with the ethos of CoR.

We transformed a vacant lot adjacent to CoR into The Refuge Garden—an urban garden that will bring fresh fruits and vegetables to local families. The garden will also serve as an outdoor classroom for job skills and urban greening initiatives.

This project is a continuation of our local platoons’ service at CoR, and an opportunity to increase capacity for the organization while engaging with the greater local community.

Meg Harrell, representing the NFL-Bob Woodruff Foundation Presenting Sponsorship of OC3, also helped kick off the project, saying, “If this isn’t ‘best in class’ and an example in ‘thrive,’ I don’t know what is.”

The Home Depot Foundation, our Daily Sponsor, also joined us. Steve Galliard said, “Serving with The Mission Continues means the world to us.” They complemented our sea of blue shirts with their sea of orange shirts for our last day of Mass Deployment. Big thanks to these awesome volunteers who helped us cross the finish line!

Things we did:
– Established a gardening center with a new greenhouse, safety fencing, and shade and seating structures
– Created a clothing donation pavilion and eco-friendly areas including a recycling shed and compost bin
– Beautified and re-purposed the grounds with extensive garbage clean-up, murals, and blacktop games.

Thank You to Our Sponsors and Donors!

Mass Deployment and our other programs are supported by our Mission Partners including the A. James and Alice B. Clark Foundation, BAE Systems, The Marcus Foundation, USAA Foundation and Wounded Warrior Project.

Operation Charm City Charge was made possible by additional support from these sponsors: