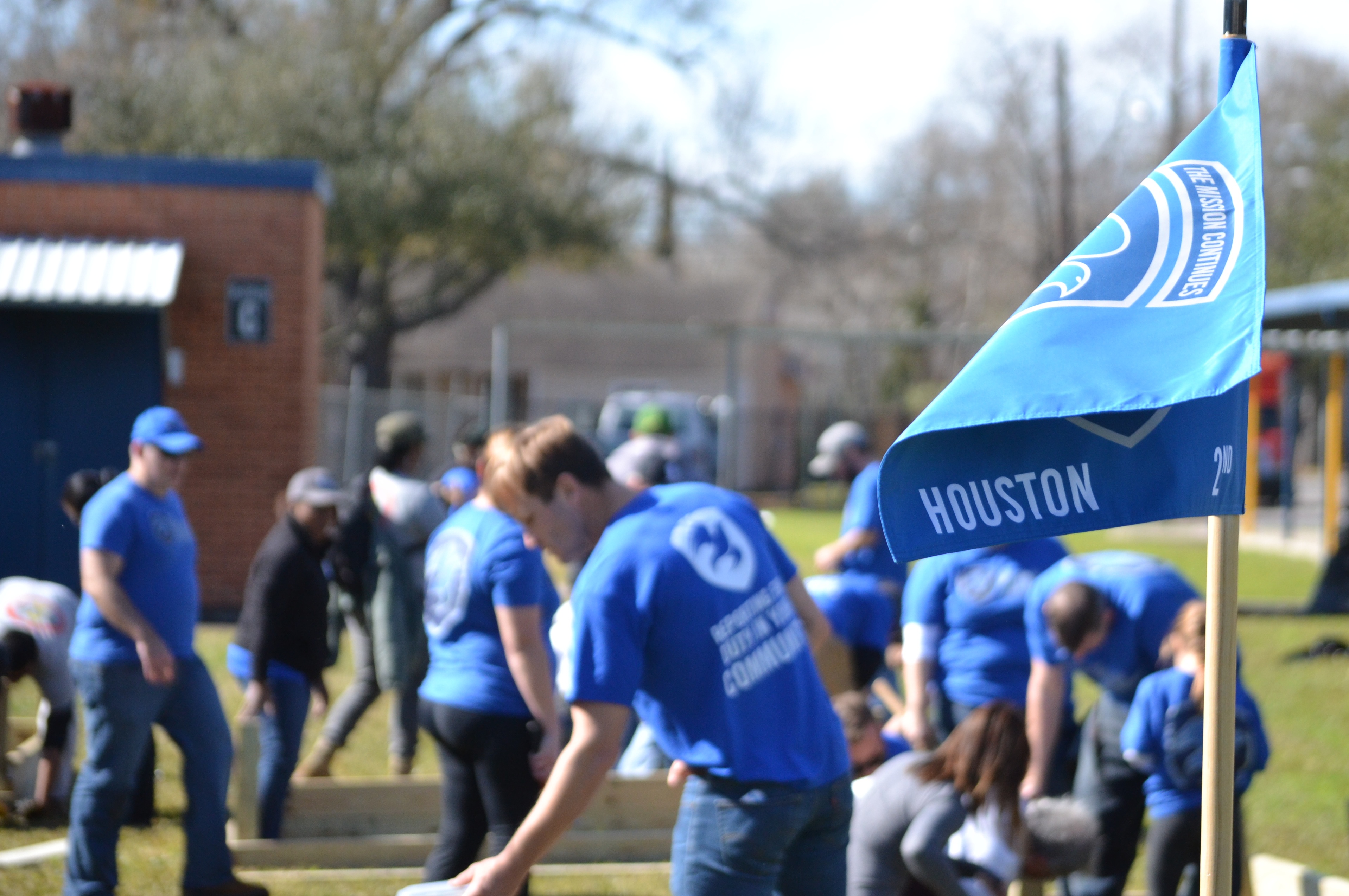 Over the weekend, more than 100 veterans converged in Houston to take their service and leadership to the next level.

As the newest class of Fellows at The Mission Continues, these veterans came from 23 states for a full weekend of leadership development, skills training, and one of the most important tools—teambuilding. Most of the newly minted Fellows didn’t know anyone involved in the program before the weekend, but when they left on Sunday, they left as members of a new unit.

Today is their first day in their six-month journey to discover untapped potential and a love of continued service. Through June, 98 Fellows will report to their host organizations, like Habitat for Humanity, the USS Missouri Memorial, and the National Center for Civil and Human Rights, with a focus on enhancing their community through service.

In a first of our orientation weekends, 13 new Service Platoon Leaders were also commissioned and charged with leading teams of veterans to tackle pressing community challenges.

So who are these veterans?

They have a millennium of experience between them—1055 of combined military service. Just over half come from the Army, with nearly a quarter from the Marine Corps, 18% from the Navy, close to 10% from the Air Force, and even one Coastie.

Though VA rates three quarters of them for a disability, they won’t let anything hinder their commitment to continued service.

After a full load of courses and breakout sessions, Fellows and Platoon Leaders linked up at Kelso Elementary in Houston. Joined by the Barbara Bush Literacy Foundation, representatives from Benjamin Moore, volunteers from Target, The Lone Star Veterans Association, and many other organizations, the volunteer effort delivered much-needed TLC to the school.

Fresh paint went on walls, green spaces were revitalized with benches, and an outdoor classroom was built under a strong oak tree. Nearby, a garden will be planted to help kids understand  the importance of sustainability and eating right.

But the project wasn’t simply an avenue for veterans to solidify their task of community service, though it certainly happened. It was also about a school and a neighborhood lifted up by the love and commitment of people all around them. One local woman said in passing, as she peeked into the school courtyard, that the neighborhood was a place no one visited or cared about. Her words gave an impression that the kids were left to an existence that might have resembled their school–a fragile place with an uncertain future. But now these kids understand an entire community is looking out for them. Now their future might look something like their new library: a bright room full of potential, dedicated to lifelong learning.

The weekend had a strong theme of building a legacy of service and leadership for this generations of veterans. It’s a continued legacy, to be sure, that started in the military and will march on for the decades to come. But for these kids, their legacy is only beginning. After this weekend, their legacy converged with a group of veterans most of them will never meet, but they will likely never forget.

As the event concluded and our newest Fellows looked back on the weekend, many described how the past weekend really put their desire to service into perspective.

One Fellow mentioned to the group that his skill set was especially valuable to his host organization, and that a full-time job offer might come up, causing a possible conflict with his Fellowship. That was before he came to Houston.

“After coming here, and going through this experience,” he said, “there’s not a dollar amount they could offer me that would take me away from this Fellowship.”

Check out the result of our work below, courtesy of the Houston Independent School District.