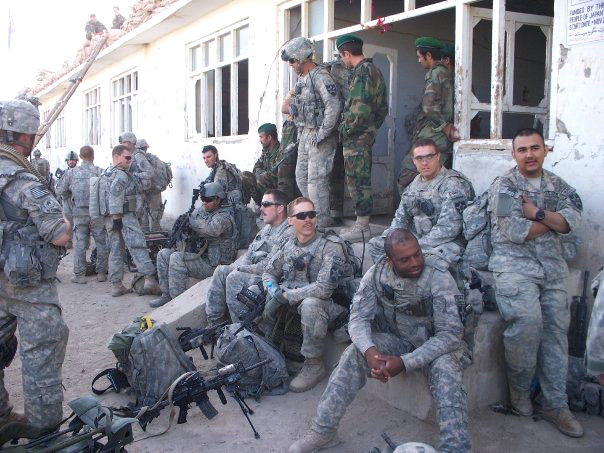 The Hardest Lesson I had to Unlearn

It was a cold wintery morning in Fort Benning, Georgia. I had just gotten done with my turn shooting when the Drill Sergeant came up to me and ordered, “Clear your weapon and leave it pointed down range, then head over and eat breakfast, be back in 20 minutes.”

I rushed over to the box of prepackaged food, that could seemingly withstand nuclear fallout, hoping that I wouldn’t be stuck with the much dreaded veggie omelet. I lucked out and got one of my favorites: spaghetti.

I sat there on the frost covered ground back to back with one of the guys from my platoon scarfing down my food when First Sergeant Gallagher called out my roster number from the range.

I quickly jumped up and ran to him and immediately popped into parade rest. He pointed down at my weapon and asked me what was wrong with it.

He told me to fix it and that he would deal with me later. My heart sunk. I knew that I was going to get the shit smoked out of me. But after what seemed like forever, we were done at the range and told to load up on the buses.

We got back to the company area and sat outside in our formation area to clean our weapons. We sat in silence, since we were still at a stage in basic in which talking was not allowed. After a few minutes First Sergeant Gallagher popped out in front of the company area and yelled, “Private Wehr!”

Here we go, this is what I’d been expecting all day.

When I got up to him he started walking and told me to follow him. We started walking towards the physical training field. I had heard that when you get separated from the group and smoked alone it was supposed to be especially bad.

I was ready to accept whatever punishment awaited me. As we approached the field we turned right and headed towards the battalion area.

Oh shit am I going to get an Article 15?

We walked into the battalion area and headed back towards the back, I had no idea what to think, but I knew it was bad. We turned down a hallway and I saw that the room we were headed to was labeled Chaplain.

Oh no, is someone in my family hurt?

We walked into the chaplains office, the chaplain was on the phone. I looked over at the First Sergeant and asked him what was going on.

He said to me, “Your father is dead. It sounds like your family loved him a lot, you need to be strong for them.” In that moment I resolved that I would tuck whatever I was feeling away and be a man for my family.

I would be a rock.

The chaplain handed me the phone and told me that my mom was on the other end. My mom’s voice cracked as she told me what had happened. Hearing her pain, a tear immediately rolled down my face.

I held strong, though I felt a painful emptiness in my gut.

I learned that day how to suppress my emotions.

This was a lesson I learned in that one moment, and would use for the many deaths that I encountered over the coming years.

Back then it seemed to me like the greatest tool that I had ever learned. It enable me to keep pushing no matter what life threw at me…or so I thought.

I knew no sadness, but I knew no joy…I was alone.

It took me several years to perfect the craft of suppressing emotions. After a while I had even convinced myself that I was alright.

I was expert level at faking the funk.

There were a few people that could see right through that act, though. It took my friends Eric and Nik in their combined effort for over a year, encouraging me to do more with my life to convince me to go to this weekend seminar, The Landmark Forum.

This was my first experience with transformational learning, which is learning what you don’t know you need to learn.

I learned the power of vulnerability, how sweet a release it was to actually tell someone how I was feeling.

I took a close look at myself and my life and was finally able to admit to myself, and others, that I wasn’t “ok” and that I needed help, that I needed to change things. I stopped getting drunk every night. I thought that would fix everything.

“What would I do with all these emotions now that I gave up my coping mechanisms?”

Outwardly things seemed to be better. I had cleaned up my act, but internally things got worse. I still was struggling to sleep at night. I was going into manic states more often.

I had seemingly opened pandora’s box, all hell broke loose. After contemplating suicide in one of my manic, insomnia ridden nights, I scoured the internet for some form of alternative health care.

I knew that I couldn’t continue taking the mind-numbing pills the VA gave me, and I wasn’t going to go back to drinking, so I had to find something.

I stumbled upon a program called Save A Warrior. I eventually pulled myself to filling out the application and applying.

I learned to feel again when I was at Save A Warrior, I learned that in letting myself feel the pain, that I also opened myself up to feeling happiness too. I learned to take responsibility for all the things going on in my life and that I now have a support system of brothers that I can lean on, whenever I need some perspective (or just to be heard).

This experience has led me down a path to where I now serve others. I am serving a fellowship of The Mission Continues with a nonprofit called The Veterans Directory, where I get to help other veterans who are struggling as I did to find the resources that will help them through it.

We are a community of leaders who have lost their way. I’m taking it upon myself to shine some light on the many paths to recovery, so that the warrior can once again be the leader he or she was born to be.

If you have a story that could inspire others to better themselves reach out to me here, and I will contact you and set up a time for you to be on my podcast. Let’s rebuild the bond that we once had and use it to better the world!