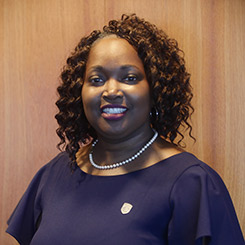 Mary Tobin is the Executive Director, East Region for The Mission Continues and has over 16 years of leader development, project management, community engagement and public speaking experience. She is extremely passionate about addressing the social justice issues that negatively affect underserved communities and is committed to working with globally-minded leaders and organizations to develop solutions that will positively impact underserved cities and communities. Mary is very active in the world of advocacy and activism as she focuses on addressing poverty through collective impact and race and gender biases in the military and the society at large.

Her public relations campaigns in the media have established her as a thought leader concerning diversity and inclusion and she has been featured in major publications such as the New York Times, Wall Street Journal, CNN, CBS, ABC, the Washington Post, and the Associated Press. She has also lectured at the United States Military Academy, the University of Alabama, University of Georgia, Texas Tech University, Fordham University, and Radio One on issues around fighting poverty, diversity, and leader development. Notably, she was a featured speaker at South by Southwest (SXSW) 2018 speaking about the usage of data and analytics to solve poverty in one of her previous roles as the Director of the Brownsville Partnership, an initiative of the national nonprofit organization, Community Solutions.

Mary is a graduate of the United States Military Academy at West Point and the New York Institute of Technology. She is a proud combat veteran, having served 10 years in the United States Army as a communications officer, including two combat tours in Iraq. Her previous roles include Senior Project Manager for the US. Department of Housing and Urban Development, a President’s Management Council fellow in the Department of Treasury, and Chief Operations Officer of the city agency Kids Hope Alliance.

She is a proud Godmother and an avid sports fan. Her personal motto is a quote from the late Muhammad Ali, “Service to others is the rent you pay for your room here on earth.”