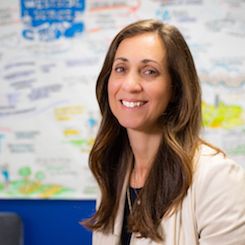 As the daughter of two Peace Corps volunteers, she was inspired to a life of public service at a young age. Mary Beth Bruggeman graduated from the U.S. Naval Academy in 1999 with a Bachelor of Science degree in Oceanography. She was commissioned a Second Lieutenant in the U.S. Marine Corps in May of that same year, and was assigned a Military Occupational Specialty (MOS) as a Combat Engineer Officer.

During her 8 years on active duty, Mary Beth was a Platoon Commander, Combat Executive Officer, and Company Commander with Marine Wing Support Squadron 373 in Miramar, CA. She deployed to Kuwait in 2003, and crossed the border into Iraq as part of the initial invasion force before redeploying safely home. Mary Beth then spent 4 years at the U.S. Naval Academy as a Company Officer and leadership instructor.

After leaving active duty in 2007, she worked for four years as the Marine Corps Account Manager at iRobot Corporation, bringing the needs of the Marine Corps to the engineers building life-saving counter-explosive robots.

In 2011, shortly after having her third child, Mary Beth left the workforce in support of her husband’s Marine Corps career. For several years, she raised a family while her husband commanded a unit of Marines and deployed to Afghanistan. During that time, she found professional fulfillment through volunteerism, serving as a coach for Girls on the Run and Girls on Track, a mentor and trainer for military spouse and family programs, and a family liaison for her husband’s active duty unit.

In 2012, Mary Beth started a business as a fitness and nutrition coach, helping hundreds of men and women improve their overall health and fitness while recruiting and mentoring more than 70 coaches.

In 2014, Mary Beth began her Master of Policy Management degree at Georgetown University’s McCourt School of Public Policy, graduating in 2016.

In 2018, Mary Beth was selected by the George W. Bush Institute as a scholar for the inaugural cohort of the Stand To Veteran Leadership Program, where she joined 32 other leaders focused on veteran outcomes for an intensive six-month leadership development program.