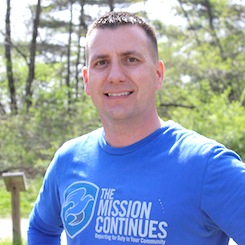 Proudest moment in my career:

Ensuring that our junior Marines receive the recognition they deserve for their sacrifice and commitment to hard work – whether as a promotion, personal award, or accelerated evaluations.

Running, relaxing at the beach, and attending concerts.

Book on your nightstand:

One constant is “The Bible,” and I’m reading the following: “The Art of the Long View” – Peter Schwartz; “The Bedford Boys” – Alex Kershaw; “The Lexus and The Olive Tree” –Thomas L. Friedman.

Movies are like meals – really good experiences worth coming back to…such as: “Castaway”; “It’s a Wonderful Life”; “Saving Private Ryan”; “The Curious Case of Benjamin Button”; and, lest we ever forget, Saturday Morning Cartoons!

I actually like MREs so it would be the one that didn’t come with CHARMs, Tootsie Rolls, or M&Ms. (Ok, Omelet with Ham was pretty bad; but that’s what the mini bottle of Tabasco was for!)

Favorite memory at The Mission Continues:

So far, it is being known as the guy who shows up to Service Platoon Events with a truck full of tools but seemingly missing the one we need the most!

The National D-Day Memorial located in Bedford County. It was dedicated on 6 June 2001 in honor of the D-Day invasion of WWII where, by population proportion (3,200 in 1944), the community of Bedford suffered the nation’s highest community loss at 22 men on the beaches and soil of Normandy, France.

Who would you dine with (dead or alive)?