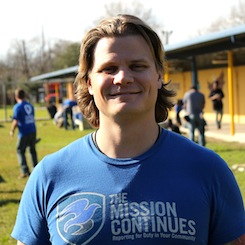 Barry was born and raised in Yamhill, Oregon. He attended the United States Air Force Academy, where he was captain of the aerobatic flying team . He earned his BS in biology and a commission as a military officer, then served five years active duty in the US Air Force. Although he deployed to Balad, Iraq in the Air Force, he was chosen to serve as commander of an Army cavalry unit on combat missions across the country. After returning from Iraq, Barry attended the Wharton School at the University of Pennsylvania, earning his MBA with a double major in finance and entrepreneurial management. At Wharton, Barry was a Leadership Venture Fellow, Veterans Club VP of Admissions, President of the Texas Club, and Social Chair of the Wharton Wharthog Rugby Football Club.

After Wharton, Barry was selected for a rotational leadership program and became an agricultural commodities trader at Bunge Global Agribusiness. During that time, he transitioned his military reserve status from the Air Force to join an Airborne unit in the Army. Barry again deployed to Iraq and led capacity building and humanitarian relief efforts, including building a school, a hospital wing, and demonstration farms in Baghdad province.

Upon completion of his second combat deployment, he returned to school, earning his MA in International Security Studies from the Fletcher School of Law and Diplomacy at Tufts University. At Fletcher, Barry founded an initiative for Security Studies students to experience military leadership training given by Marine Corps instructors at Officer Candidate School in Quantico, Virginia. He also continued his service as a paratrooper and pinned on the rank of Major. After graduation, he led a non-profit venture into Ethiopia, empowering the community to lift their remote, rural villages out of extreme poverty. In this position, he launched and built Nuru International’s second country project from scouting to implementation phase by empowering and mentoring a team of Ethiopian leaders. He then returned to the US and joined The Mission Continues in 2014 as Regional Director in Houston, Texas.

Barry also enjoys outdoor endurance sports. In less than one year, he climbed all 67 of the 4,000+ foot mountains in New England, including the Presidential Traverse in winter. He summited the highest volcano in North America and enjoys week-long dogsledding and kayaking expeditions. As a fundraiser for a Guatemalan orphanage, he kayaked over 300 miles solo from Canada to Boston in nine days. His favorite climb was a winter summit of Mt. Shasta. He currently lives in Houston, Texas.