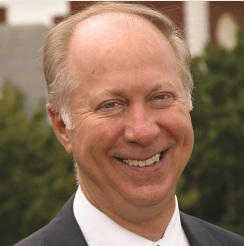 David is a professor of public service and Director of the Center for Public Leadership at the Harvard Kennedy School, positions he has held for the past decade. In addition, he serves as a senior political analyst for CNN and works actively with a rising generation of new leaders.

In the past, he has served as a White House adviser to four United States presidents of both parties: Nixon, Ford, Reagan and Clinton. He wrote about those experiences in his New York Times best-seller, Eyewitness to Power: The Essence of Leadership, Nixon to Clinton.

In the 1980s, he began a career in journalism. Starting with the McNeil-Lehrer NewsHour in 1984, he has been a regular commentator on public affairs for more than 25 years. Twice he has been a member of election coverage teams that won Peabody awards: in 1988 with McNeil-Lehrer and in 2008 with CNN. In the late 1980s, he was chief editor of U.S. News & World Report, working with publisher Mort Zuckerman to achieve record gains in circulation and advertising.

David’s work as Director of the Center for Public Leadership at the Kennedy School has enabled him to work closely with a rising generation of younger leaders, especially social entrepreneurs, military veterans and Young Global Leaders chosen by the World Economic Forum. Through the generosity of donors, the Center helps to provide scholarships to 50 to 60 students per year, preparing them to serve as leaders for the common good. The Center also promotes scholarship at the frontiers of leadership studies.

David has been married since 1967 to Anne Elizabeth Gergen of England, a family therapist. They have two children and four grandchildren. His son Christopher is a social entrepreneur in North Carolina, as well as an author and member of the Duke faculty. His daughter Katherine is a family doctor, working with the underserved population at the Boston Medical Center.

He is currently at work on a new book about renewing America’s political culture.